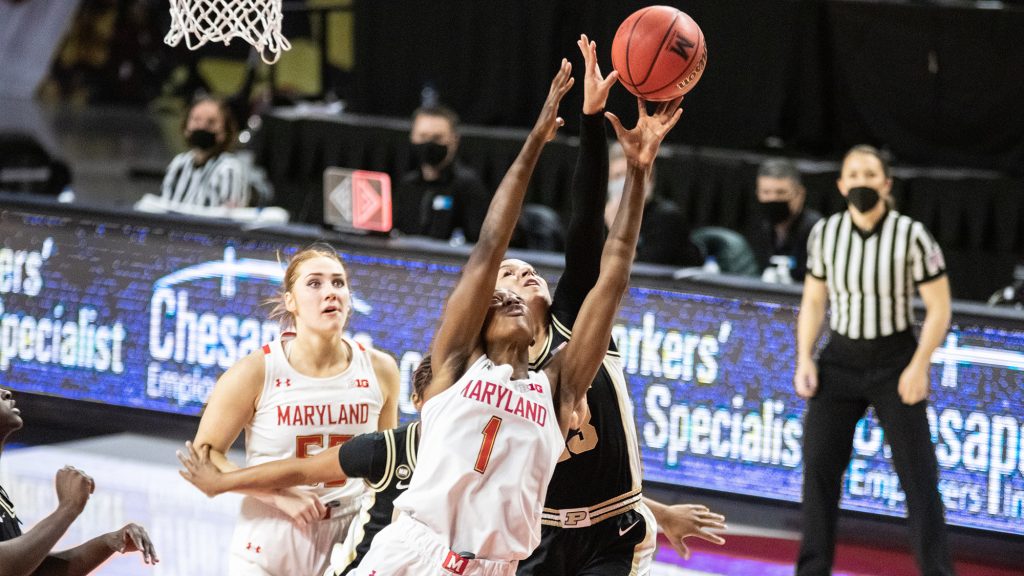 The last time Maryland women’s basketball played Ohio State, it was in Indianapolis for the Big Ten Championship — a game the Terps won. It would be the last contest they’d play in a season where they were the conference’s top offense and second-best defense.

Despite the COVID-19 pandemic and near-entire roster overhaul that happened in the 10 months since that game, Maryland finds itself in a familiar position in the Big Ten: first.

But the way the Terps got there is different. Coach Brenda Frese’s squad remains first in offense, and they’ve gotten even better than last year. The team increased its scoring output by almost 10 points per game, from 82.8 to 92.5.

However, the problem comes on the other end of the court, where Maryland is fourth-worst in the conference, allowing 75.9 points per game — well above last year’s mark of 57 points per game.

The Terps are also dealing with younger players up-and-down the roster, with three sophomores and one redshirt sophomore having played every game, leading to some of the defensive issues.

“We really just talked about communicating and really just stepping up that energy level,” Chloe Bibby, one of the squad’s few veterans, said after the team’s win over Wisconsin. “I think when we can do that, and we can put 40 minutes together, we’re going to be unstoppable.”

After Maryland’s game with Iowa was postponed, Frese used the break to continue improving her team’s situational play.

“We’ve been able to spend more time on situations and sidelines and end of the game,” she said. “So just you know you tried to really utilize those practices to make sure we sharpen everything.”

Diamond Miller will be one of the keys for the Terps’ defense. She’s shown signs of becoming dominant on that side of the ball but continues to struggle with inconsistency, which was evident at the beginning of the Wisconsin game.

In the second quarter, Miller was caught ball-watching and was slow to get a rebound, allowing the Badgers to extend their possession. A couple minutes later, Miller and Faith Masonius miscommunicated and allowed an easy basket down low. She picked it up in the second half, but Frese wasn’t thrilled about her first-half play.

“She made a shot and so then she decided to guard [in the third quarter]. That’s the youth right now and Diamond continues to work through that,” Frese said. “Our defense can always be here for us, she doesn’t have to make a shot to defend. She’s trying to get there, I loved her response in the second half.”

There are signs of progress for the sophomore. Early in the year, Miller struggled with foul trouble; she currently leads the team with 35 fouls, six more than her nearest teammate, and has had seven games with at least three fouls.

But in her last six games, Miller has shown improvement, averaging just 2.2 fouls and playing much more disciplined defensively.

“I’m still working on consistency and stuff like that and making sure I’m always in the rotations and not late to different things,” Miller said. “So it’s a work in progress but I’m definitely one step closer to where I’m trying to get to.”

And ahead of facing one of its biggest threats in the conference, Maryland is determined to improve its defense.

“I know our players are excited to go against [Ohio State] as well,” Frese said. “As this team continues to keep showing their identity of who they are and what they want to build this season, I’m excited for this match up.”