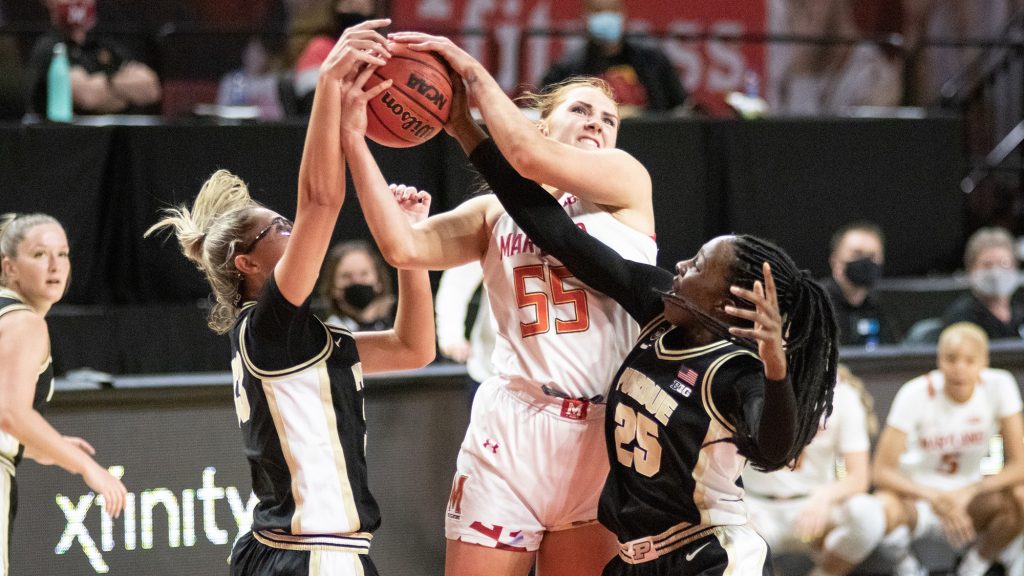 Mimi Collins has watched a lot of film of herself in her first years as a Terp. The Maryland women’s basketball forward has established herself as a part of coach Brenda Frese’s frontcourt, crashing the boards and generating extra possessions on the offensive end.

But she noticed she often fails to do one thing: jump.

“Watching film, a lot of times if you watch me play, I don’t jump,” Collins said. “Which is kind of odd, but the ball ends up coming to me.”

That perhaps intuitive skill is something that Collins has focused on this season. It helped propel Maryland to victory Sunday, as she and her frontcourt partner Chloe Bibby combined for 30 points and 23 rebounds in a 79-70 win over Wisconsin.

“I thought both Mimi and Chloe really helped carry us,” Frese said. “When our guard play is off, we’ve got to be able to find other ways [to win], and I thought those two were terrific.”

Bibby started out the game on fire, making all five of her first quarter shots. The Terps needed them, as the rest of the squad combined to shoot 2-of-14 from the field that quarter. Bibby finished well around the rim, providing an outlet down low for guards Katie Benzan and Ashley Owusu, but also she made her mark with two three-pointers, one from the corner and one above the break in transition.

“The ball comes to me,” Bibby said. “My teammates putting me in great positions, and they’re just easy buckets is what I’m getting.”

Bibby’s 6’1 height gives her an advantage over many, as there are few defenders who can come out and challenge her shot.

“That high release on her three — so hard to guard with her on the pick and pop,” Frese said. “And now you look at the versatility, I mean her running into transition to tough finishes.”

The increased production has been building for both Bibby and Collins, neither of whom had averaged above 12 points per game prior to this season. Bibby is now tied for the team lead in minutes played and has scored 15 or more points in six of the eight games since Angel Reese’s injury.

Collins tallied a career-high 17 rebounds, nine of which gave the Terps opportunities for second chance points that they needed to propel a stifling offense that shot under 40 percent from the field for the first time this season. Maryland had 16 second-chance points in the game and outrebounded the Badgers 44-29, in large part to Collins changing a very simple part of her game.

“I just told myself that I need to jump… I just started jumping and the ball just magically started coming to me,” Collins said.

The jumping paid off, as Collins extended possessions with regularity. On a play early in the second quarter, Bibby had a rare miss on a corner three, but Collins anticipated the ball’s path after ricocheting and positioned herself to catch it and go back up for a smooth two points.

It was a familiar sight Sunday, as the two worked in tandem, grabbing rebounds from each other’s missed shots, and getting easy layups themselves. That teamwork ensured Maryland’s 10th win in a row.

Winning those games wasn’t easy, and winning the ones that are upcoming will be even less so, but the Terps starting frontcourt knows that sometimes the best solutions are the simplest ones.