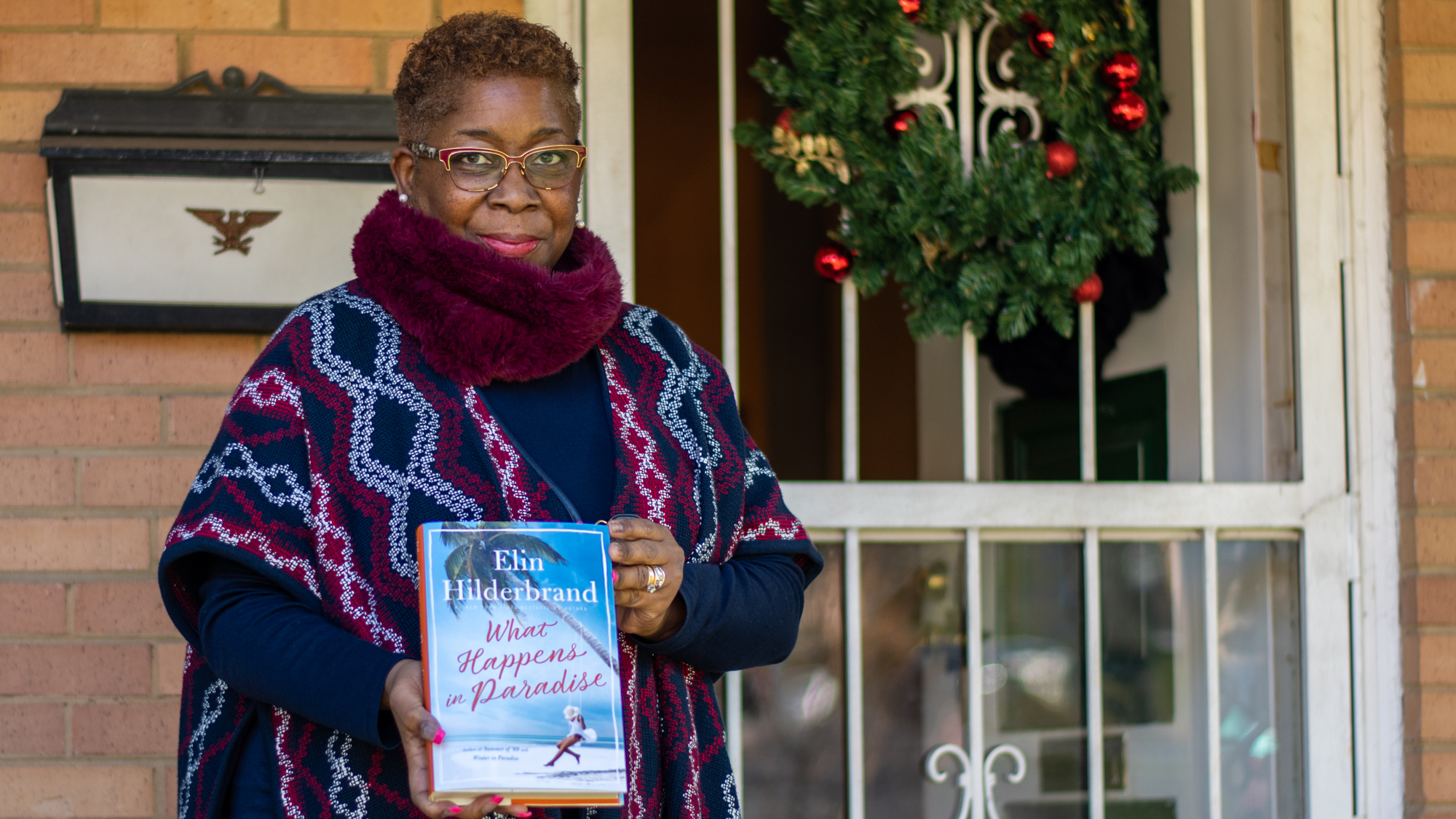 College Park District 4 council member Denise Mitchell holds one of the possible books to be read by the book club outside her home in College Park Woods on Dec. 6, 2020. (Joe Ryan/The Diamondback)

When she was a young girl living in Upper Marlboro, College Park resident Nikki Pancho-Lewis remembers the bookmobile rolling into town every Thursday.

She’d run up to the book-filled truck with her library card and pick out seven books, usually by Judy Blume. The following Thursday, she’d return her books and do it all again.

“Just growing up reading and actually sitting down and reading books — it’s something that sticks with you,” said Pancho-Lewis, who lives in District 4.

Now, she and District 4 council member Denise Mitchell are on a mission to unite College Park women who share a love of reading by starting a book club just for them this January, bringing back a similar club that petered out in the 1980s.

With COVID-19 cases on the rise and the dregs of a turbulent election season still circling the drain, Pancho-Lewis said she and her mother are looking for something to talk about that has nothing to do with either topic. And, Mitchell said, a book club would be a great way to get women together — over Zoom, of course — to bring back some sense of normalcy amid the pandemic.

With the burden of child care, and now homeschooling, often falling on the shoulders of women, Mitchell says they deserve a break to do something they enjoy.

“[We can] talk about a book, then have the opportunity for at least two hours to let our hair down and just talk and check in to see how women are doing,” she said.

Pancho-Lewis and Mitchell plan for the club’s members to read books spanning various genres, including romance, cooking, women empowerment, women in politics and more. When the club begins, members will take a look at a list of selected books and vote for which one they want to read that month.

Some of the titles will include Becoming by Michelle Obama, What Happens in Paradise by Elin Hilderbrand and A Woman is No Man by Etaf Rum.

Though the book club’s first meeting is still a month away, District 4 resident Jane Hopkins already knows she wants to take part in it. She’s been in several book clubs before, and she especially enjoyed cooking food with the other members. When it’s safe for the fledgling College Park book club to shift from Zoom to in-person, she hopes she can do the same with its members, a sentiment Mitchell shares.

Hopkins is also looking forward to experiencing the sense of camaraderie she hopes the club will foster between its members. She’s excited to dive into new reads and see how other people’s interpretations differ from her own.

“I hope she gets the book club off the ground,” Hopkins said.

Former District 4 council member and resident Dustyn Kujawa is also planning to join the club. She wants to get two things out of her membership: good books and good discussions with neighbors.

“Pre-COVID, there’s not enough hours in the day to do everything you need to do. Now that many people are working from home, it’s a different story,” Kujawa said.

Pancho-Lewis and Mitchell are also hoping to get some University of Maryland students to join the book club. It would be great to get some input from younger generations, Pancho-Lewis said.

“We don’t want [to exclude] anyone in the city of College Park,” she added. “Student, resident, rental person — everyone’s included.”