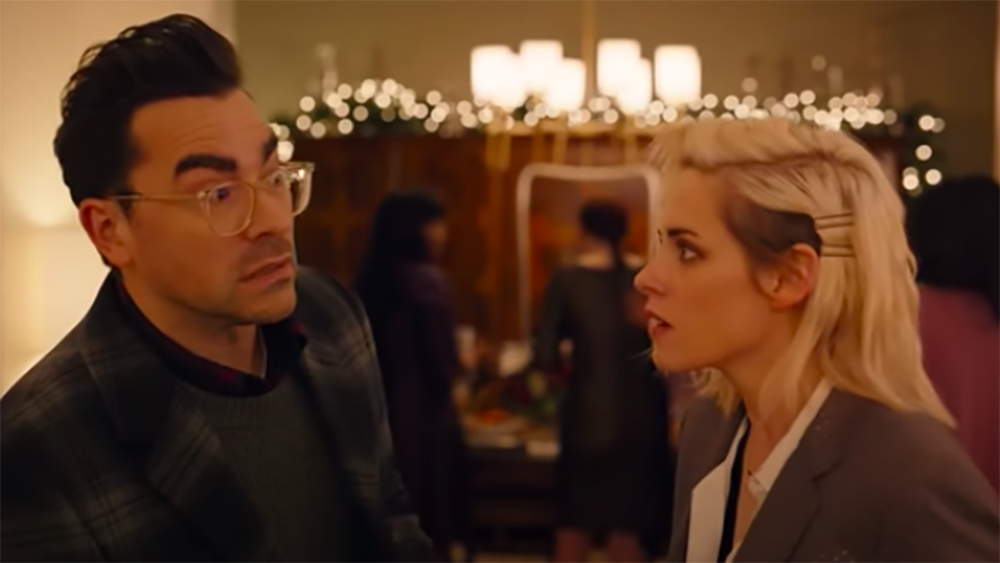 'Happiest Season' is now available to stream on Hulu. (Screenshot via YouTube)

Happiest Season opens with a scene of Abby (Kristen Stewart) falling off a roof onto a large inflatable Santa decoration as she tries to have an intimate moment with her loved one. This scene was funny, if not slightly exaggerated, and perfectly presaged the tone for the rest of the movie.

The film, directed by Clea DuVall, who’s best known from the 1999 film But I’m a Cheerleader, is your classic feel-good holiday rom-com — except the main romantic relationship was between two women.

The movie, which recently dropped on Hulu, follows couple Abby and Harper (Mackenzie Davis) as they visit Harper’s wealthy, well-known family for the holidays and are forced back into the closet because she has not come out to her family yet. The film is a rollercoaster of emotions as Abby, who must pretend to be Harper’s straight roommate, becomes frustrated with Harper’s changed behavior around her hometown family and friends, and Harper feels more and more pressure to come out to save her relationship with Abby.

[Review: Miley Cyrus mostly succeeds in bridging her past and present with ‘Plastic Hearts’]

The movie is mostly light-hearted and fun, with comical relief coming from Abby’s best friend John (Dan Levy). It includes a message that hits close to home for the LGBTQ community about being ready to come out and understanding diverse experiences with coming out, whether negative or positive. Because one of the movie’s main themes is about hiding your sexuality, many people within the community likely related to the heart-dropping moments when Abby and Harper’s relationship was nearly exposed.

Along with discussing LGBTQ issues, the story follows Harper’s siblings and their personal struggles with their judgmental parents. This makes for a good message about the concept of a perfect family, especially one in the public eye, and the reality that these family relationships are often much more complicated than perceived.

Being the first mainstream queer-centered holiday rom-com, Happiest Season is far from perfect. Although it’s crucial for movies to explore coming out and the complications of being in the closet while part of a conservative family, it is also important to balance this with the need for films focusing on LGBTQ relationships without including society’s expectations or the stress of hiding.

[Season four of ‘The Crown’ is a smashing success]

Personally, I have seen very few LGBTQ movies that do not also highlight the controversy, pain or struggle revolving around the relationship. And although this struggle is very relatable for LGBTQ community members and meaningful to some, I would like to see more films highlighting same-sex couples without enforcing the idea that these relationships are different —  they are simply about the love between two people.

However, this kind of representation in mainstream movies offered by Happiest Season is highly important and a great start to push for even more LGBTQ representation in the blockbuster world. For many, simply having a major LGBTQ holiday movie is heart-warming despite its imperfections.

Shortly after the movie was released, many people also took to Twitter to express their frustration that Abby did not end up with Harper’s ex-girlfriend Riley (Aubrey Plaza), who forms a friendship with Abby while she struggles with Harper’s changed personality. Some were rooting for the two to get together throughout the movie, and some think it would have made more sense for them to be a couple. This critique is less serious, but I can’t say I disagree; I almost wanted the two to end up together, even though this would have made for an entirely different movie.

Despite its criticism, Happiest Season is a great Christmas movie to add to your list to get away from the mainstream heteronormative rom-coms this season, and I would count it as a win for the LGBTQ community. It will get you thinking about important issues faced by same-sex couples with unaccepting family members and leave you with warm and fuzzy feelings, whether you’re part of the community or an ally.