Dontay Demus Jr. has been a steady force in Maryland football’s unusual season 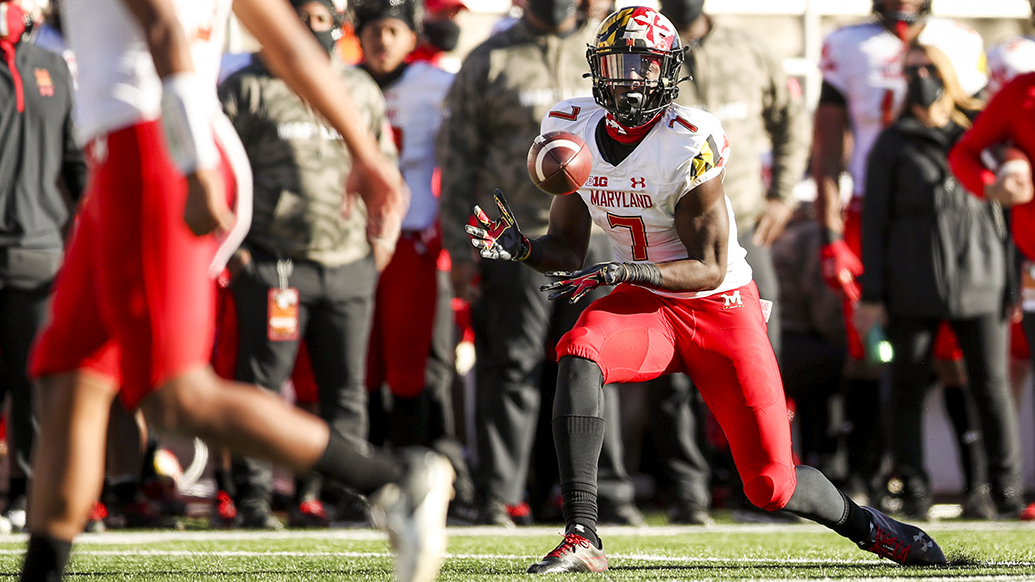 As Maryland football stumbled its way through garbage time in its second loss of the season against Indiana Saturday, its offense was making one late push to finish the day on a high. Taulia Tagovailoa took the snap and began scrambling, while wide receiver Dontay Demus Jr. broke free in the end zone.

And with a Hoosiers defender bearing down on him, the quarterback locked eyes with Demus and heaved the ball in his direction. Demus snagged the pass to give Maryland its only touchdown of the game.

The young signal caller has often relied on Demus as a trusty option when plays break down. And Demus has rounded into a steady presence for a young Terps offense, consistently delivering strong performances while leading a young wide receiver corps.

“I’ve always felt since the day I got here on campus that he was one of the most talented receivers in our program, if not in this league,” coach Mike Locksley said. “You’re starting to see his consistency show up.”

But when Demus began his tenure in College Park as a relatively unheralded three-star prospect, he had a lot to prove. Though he was a physical force with raw talent, he was buried on the depth chart. Demus started just one game as a freshman.

In 2019, he got a chance to move up, after Jeshuan Jones tore his ACL. He took advantage of his expanded role, leading the team with 625 receiving yards and six touchdowns, starting every contest.

He has continued that production in 2020, now as Tagovailoa’s top option. Through Maryland’s four games, he leads the team with 23 receptions, 342 receiving yards and three touchdowns. For the Washington, D.C., native, that progression has come as a result of dedication to his craft.

“I just knew that I had to be more consistent in being an A-player, always being available no matter how the game was going, good or bad,” Demus said.

That has translated onto the field to help buoy an explosive offense that hung at least 35 points on Minnesota and Penn State. Such standout performances are the culmination of a rigorous practice routine that includes facing the Terps’ top cornerbacks.

Those players said going up against such an imposing receiver has helped their game when they face similar threats from other Big Ten teams.

“He’s my greatest competitor,” defensive back Kenny Bennett said. “That’s the … body type that we’re going to see in the game a lot, so us getting that every single day, it just helps us prepare for anybody.”

Demus has also been boosted by that work with his teammates. Locksley said he’s noticed improvement and stronger practice habits in his star receiver as a result of facing that competition.

But the second-year head coach said he’s seen the most growth in Demus’ mindset.

As the most experienced member in the wide receiver room, he’s become the group’s de facto leader.

It’s not a position that is necessarily natural to the more reserved Demus, but it’s one that he’s embraced. Even if he is not the loudest presence in the locker room, he has led on the field, providing an example of effort and success for the young team to match.

And that has been critical in steadying a topsy-turvy season.

“I don’t simply want to be like, ‘Oh yeah, I’m going to make this play, I’m the leader of this room,’” Demus said. “I just try to make sure everybody eats, and I can have a good example to show them.”