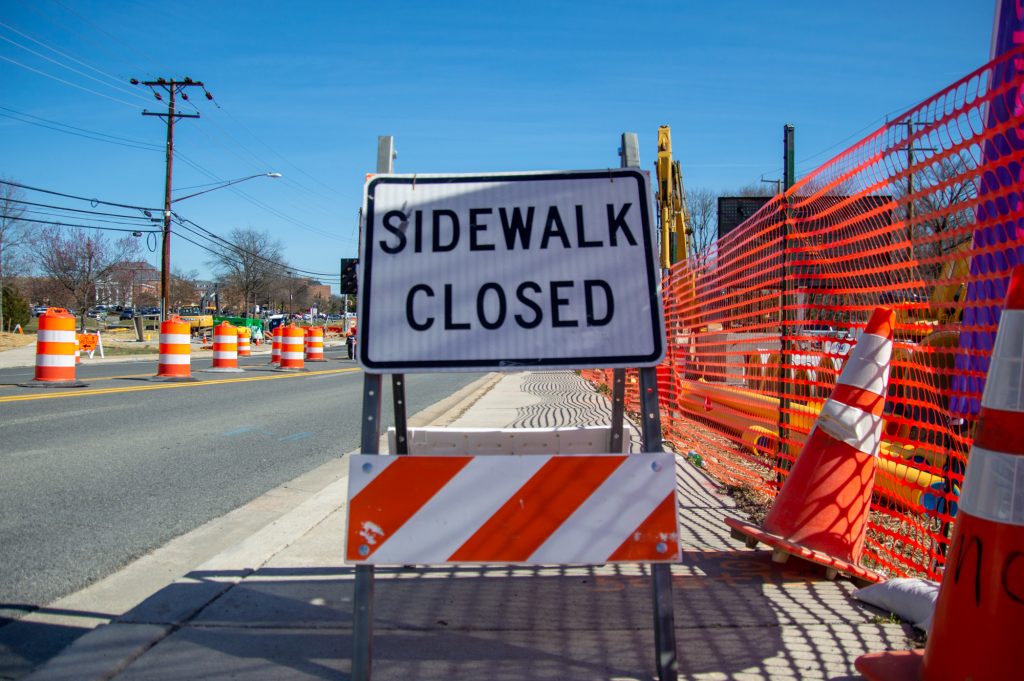 A sidewalk closed sign next to the Purple Line construction site on Campus Drive on March 9, 2020. (Joe Ryan/The Diamondback)

After months of negotiations and pleas from city and county officials, community members and Maryland’s congressional delegation, a settlement has been reached to save the public-private partnership behind the Purple Line project.

Under the new agreement, the Maryland Department of Transportation will pay $250 million to settle all outstanding financial claims and terminate the pending litigation within the partnership.

Though the settlement is contingent on approval from the Board of Public Works in December, if approved, the public-private partnership will continue with just two of the original construction contractors: Meridiam and Star America.

“This agreement is a major step toward completing the Purple Line, a transformative project for our state and the region,” Maryland Gov. Larry Hogan said in a statement.

The long-delayed 16-mile light rail project was left up in the air in September when the contractors quit over hundreds of millions of dollars in cost disputes, which they claimed were due to delays in the project.

On Sept. 28, MDOT and the Maryland Transit Authority took over the project but continued negotiations with the private contractors.

Though Hogan has accused the light rail’s contractors of trying to take advantage of the state’s taxpayers, U.S. Rep. Anthony Brown (D-Md.) denounced the governor for mismanaging the project in a video posted on his Facebook page in late September. Because of Hogan’s actions, Brown said, communities had been left with road closures and job layoffs during the worst economic climate in a generation.

At the time, Brown — who represents much of Prince George’s County and some of Anne Arundel County — was also concerned that the project’s completion could be delayed to 2026. He called for Hogan to “break his silence and offer a real plan, not half measures.”

“We deserve better,” he said.