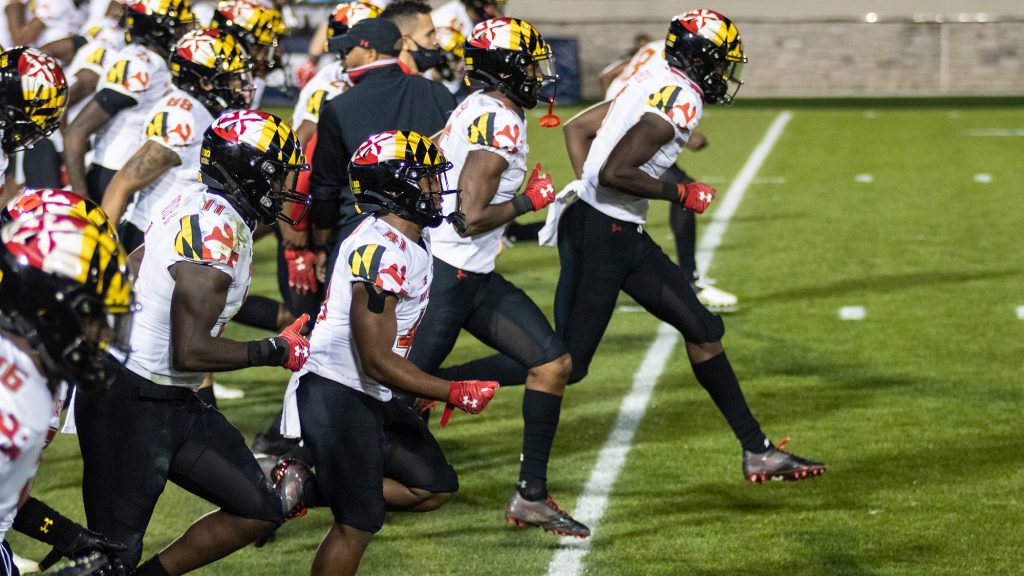 Maryland football warms up during its 35-19 win over Penn State on November 7, 2020 at Beaver Stadium in University Park, Pennsylvania. (Julia Nikhinson/The Diamondback)

Maryland football resumed workouts Monday following a nearly two-week pause due to a COVID-19 outbreak among the team. The outbreak also caused the cancellation of two games.

Since Thursday, the team has had one positive antigen test, which was followed up by a negative PCR result. There were no positive PCR tests among football players on Sunday.

Since Nov. 5, 23 players and seven staff members have tested positive for the virus, including head coach Mike Locksley. Per Big Ten rules, the earliest an athlete can return to game competition following a positive diagnosis is 21 days.

That means most of those players will not be eligible to return Saturday against No. 12 Indiana, if the game goes on as scheduled. Several players and staff — including Locksley — have mild symptoms, head team physician Dr. Yvette Rooks said last week.

Locksley, meanwhile, will coach practices virtually this week and is planning to travel with the team to Indiana for Saturday’s game, per a release from the team. Coaches are only required to isolate for 10 days after a positive test, per The Washington Post.

Maryland (2-1) also cannot afford another cancellation if the team wants a chance to play in the Big Ten title game. Conference rules stipulate teams must play at least six games to participate in the championship game. The Terps’ eight-game schedule has been reduced to six following cancellations against No. 3 Ohio State and Michigan State.