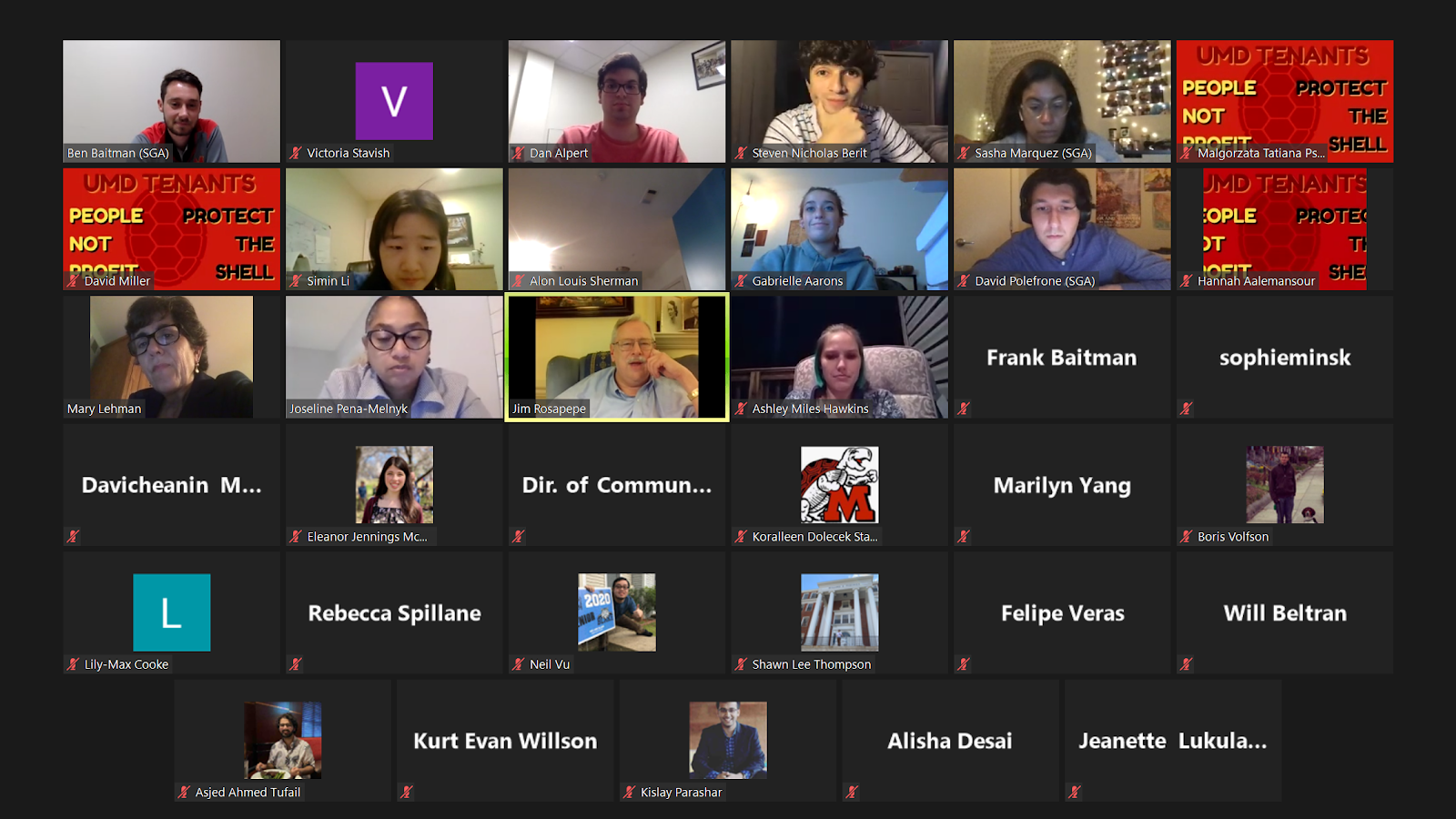 The University of Maryland's Student Government Association hosted a virtual town hall with state and federal legislators on Nov. 10, 2020. (Victoria Stavish/For The Diamondback)

The University of Maryland SGA hosted a town hall with state and federal legislators Tuesday evening to discuss the recent presidential election and the upcoming Maryland General Assembly session.

Ben Baitman, a senior economics and government and politics major and the Student Government Association’s director of governmental affairs, took part in planning the event along with the organization’s civic and government affairs committee.

At the beginning of the town hall, U.S. Sen. Chris Van Hollen (D-Md.) and Rep. Jamie Raskin (D-Md.) answered questions on the recent election and the upcoming legal battles it presents.

In regards to the changes expected from the Biden-Harris administration, Van Hollen said he is hopeful about their agenda.

“The very good news is, we put an end to our four-year national nightmare,” Van Hollen said. “I really believe that another four years of Donald Trump would have totally threatened our democracy.”

[Students under 18 can’t vote, but they found other ways to stay engaged]

Van Hollen and Raskin also stressed the importance of young voter turnout, especially in midterm elections, before both representatives had to leave. Then, the focus of the town hall shifted to a discussion about the upcoming Maryland General Assembly session, which will take place from January to March.

“Making it easier for people to vote means more people vote, who knew!” Rosapepe said, adding that everyone showing up to vote in one place at one time is “a little 19th century.”

Peña-Melnyk said she plans to spend the upcoming session focusing on health disparities in Maryland that have become prevalent due to the pandemic.

She also plans to present a bill to address rising sea levels in the state, she said.

Addressing an issue on the minds of many university students, Rosapepe touched on anger surrounding leasing issues in College Park.

Due to the pandemic, many students have attempted to get out of leases for several on-campus apartments, and in September, students from this university and Towson University teamed up with some state legislators and held a caravan protest at the Maryland State House.

“There’s a lot of sympathy in the legislature,” Rosapepe said.

Many of the students involved in housing issues are currently working with lawyers, Rosapepe said, so he suggested those students work with legal representatives to discuss a resolution.

After about an hour, the town hall closed with some legislators calling for Gov. Larry Hogan to show more leadership in response to the pandemic.

“Our economy is important, but our health is more important and it’s a delicate balance,” Peña-Melnyk said. “You have to make the decision as a leader to say, ‘This is what it’s going to be.’ If you’re gonna have a mandate for masks, you have a mandate for masks. If you’re going to go ahead and begin Phase t=Two, you have to do it for everyone so we have consistency.”