With poise and confidence, Taulia Tagovailoa turned it around for Maryland football 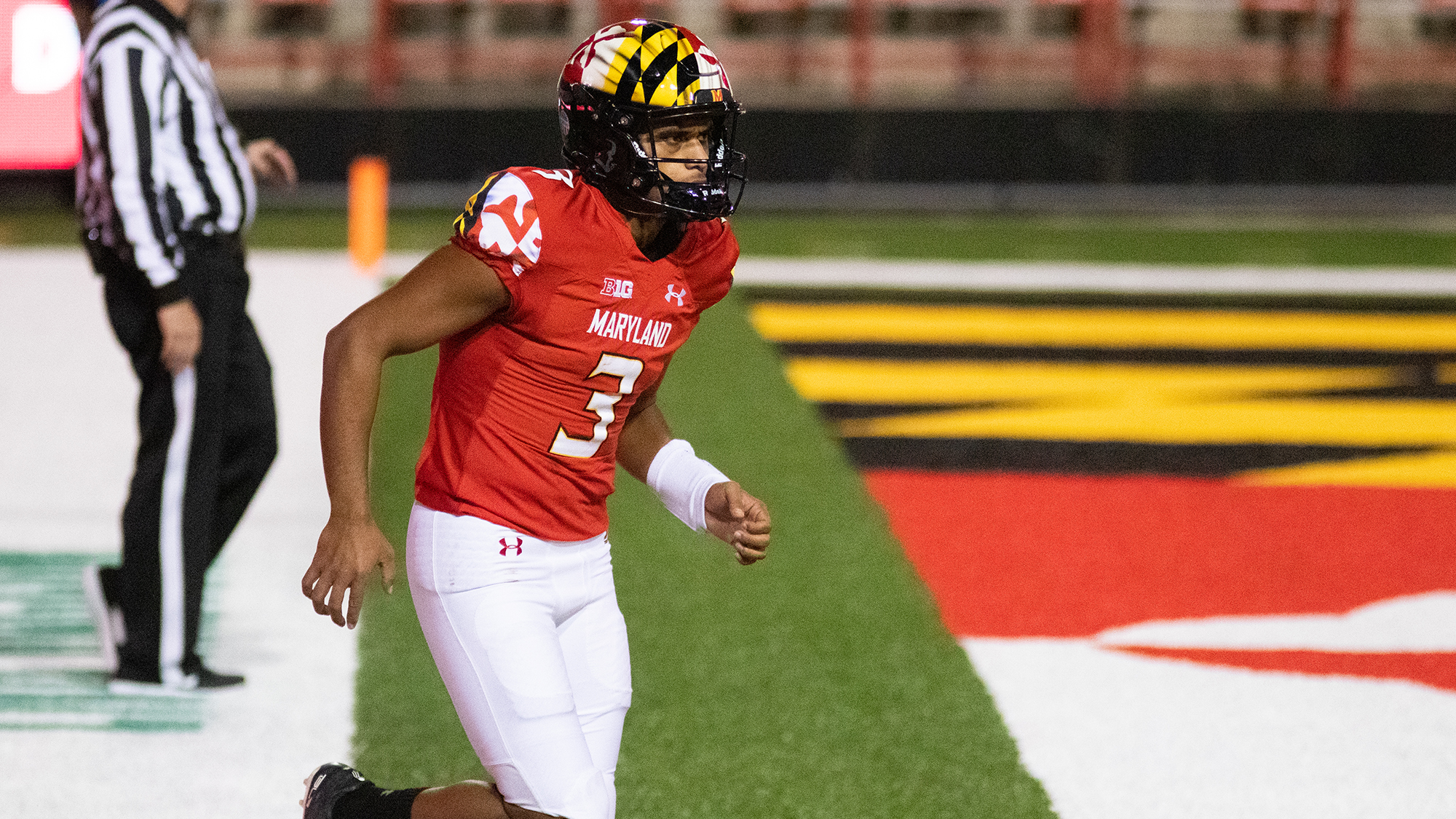 Quarterback Taulia Tagovailoa runs to the sideline after scoring a touchdown during Maryland football’s 45-44 win over Minnesota on Oct. 30, 2020. (Julia Nikhinson/The Diamondback)

Taulia Tagovailoa wasn’t watching when Minnesota football kicker Brock Walker lined up for the extra point attempt. The Gophers needed to convert to send the game to double overtime. Tagovailoa just kept his head down and recited a prayer.

Walker’s kick skewed to the right. Tagovailoa did a double-take. Maryland, after trailing by as many as 17 points, had won. It was a triumphant, last-second, come-from-behind victory, one in which the sophomore quarterback took charge. And in the ensuing swirl of jubilation and excitement, something else became clear: Tagovailoa had finally arrived.

“What you guys saw is what we saw out of him all camp long,” coach Mike Locksley said. “It was great for him to be able to bounce back and do that here at home.”

Tagovailoa entered the 2020 season as a bit of an unknown force. His talents were lauded throughout high school — and he has that famous last name — but he received very little playing time at Alabama.

So when he transferred to Maryland and won the ensuing quarterback competition, all eyes were drawn on his debut against Northwestern.

But he disappointed in that game. It was a contest plagued by turnovers and risky decision-making, one in which the Terps had no answer for the Wildcats. Entering Friday’s game against Minnesota, Tagovailoa and Maryland had something to prove.

“[We], as a team, made a decision to just put our heads down after that last game and just continue to work,” Tagovailoa said. “We felt we had the players to go out and win games and perform like how we performed today … It really was for all of us to bounce back.”

And Tagovailoa spearheaded the turnaround in College Park. He accounted for 453 all-purpose yards and five touchdowns, including the game-winner — a two-yard scramble in overtime. He looked poised and confident throughout the game, settling into a rhythm early while taking fewer risks and deep shots.

That was evident on the Terps’ first two drives. Tagovailoa opened the contest by orchestrating an 11-play, 82-yard series that ended with a touchdown pass to redshirt senior running back Jake Funk.

And on the next drive, Tagovailoa only needed three plays to lead Maryland into the end zone — this time, using his legs to spin out of a possible sack and scramble for a 39-yard rushing score.

“He’s so smart in the pocket. He does a great job identifying pressures,” Funk said. “He’s a game manager, along with him just balling out in the passing game.”

Those types of big plays, that crucial mobility, had been clear to his teammates during workouts, but Tagovailoa had yet to show it in game action. And despite his week one struggles, Tagovailoa doubled down on his prep strategy against the Gophers, turning to his meticulous study habits to learn from his mistakes.

On Friday night, it all came together.

He showcased his speed and agility, a facet of his game that he had worked on but failed to execute in the season opener. Tagovailoa broke away from several pressures from the Minnesota front seven and was only sacked once, something he credited to increased reps in practice.

“Coach always told us if passes break down, use two hands on the ball, and you can spin out or step up,” Tagovailoa said. “I took what we used in practice and used it in the game.”

While Tagovailoa said he is not reading too much into his breakout performance, he said he was proud of his teammates for their response to the season-opening clunker.

Now, it’s a matter of stringing together those performances to show that he and the Terps are here to stay.

“We showed a lot of grit, a lot of fight and a lot of perseverance to come off of a loss like that,” Tagovailoa said. “Hopefully we can build on this.”