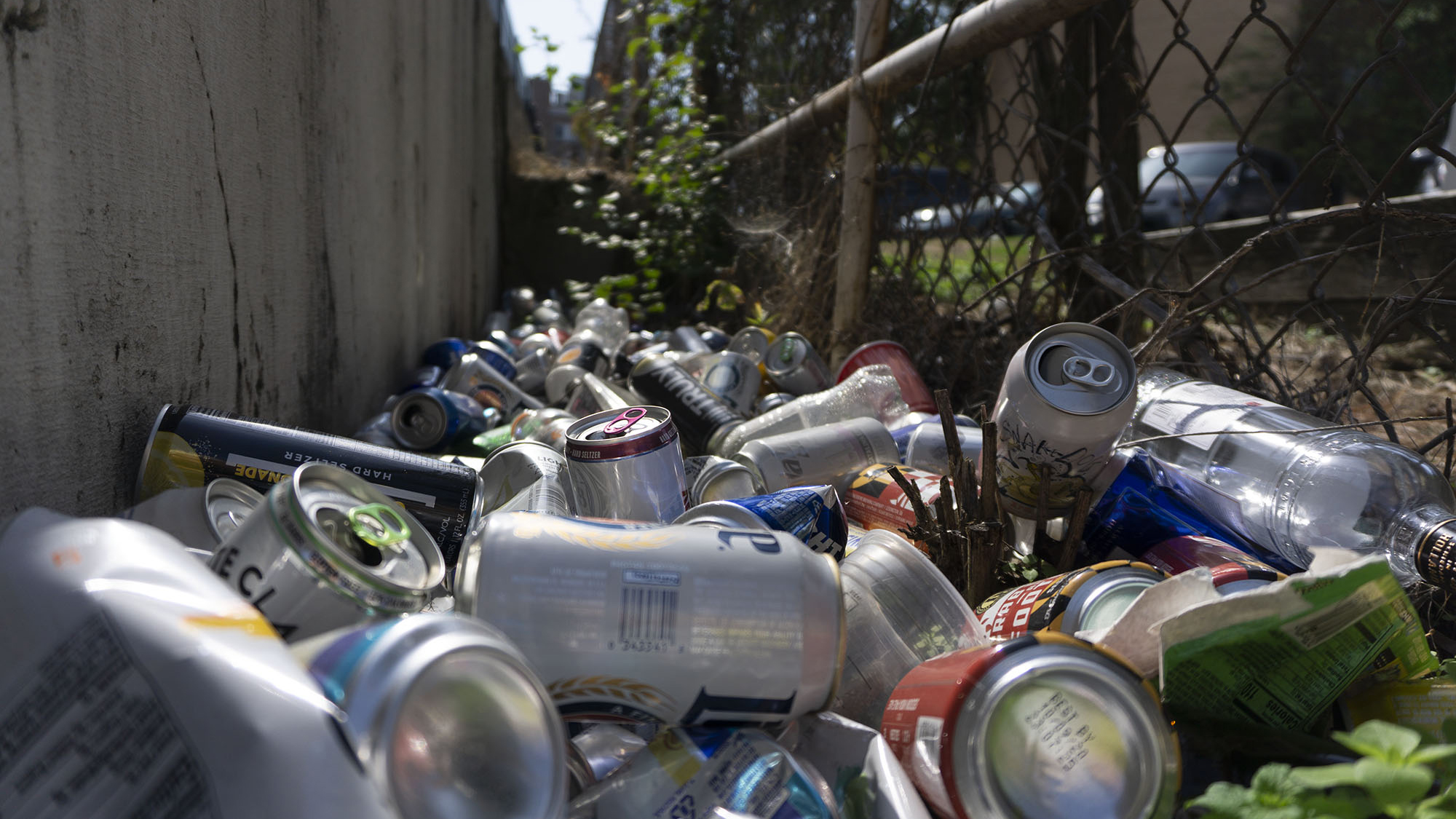 Bottles, cans and other trash piles up between the parking lot behind the College Park Shopping Center and College Park Towers. (Taneen Momeni/The Diamondback)

When Andrea Johnson first started taking her daily walks along the hill on Knox Road near her new apartment in Terrapin Row, something caught her eye.

Sandwiched between a concrete wall and a rusty barbed wire fence separating the College Park Towers apartments from a parking lot behind the College Park Shopping Center sat a pile of crushed beer cans, plastic bags and red Solo cups.

University of Maryland students who live on the campus or in another part of College Park may never have witnessed this sight. But for months, the pile was an unavoidable landmark for people like Johnson.

“[I was like], ‘Why hasn’t this gotten taken care of?’” the junior biology major said. “I just don’t even know how you let it get so bad.”

Johnson wasn’t alone in her disgust. On Reddit, one user wrote that the area makes the city look “trashier than it already does,” while another called the area an “eye sore.”

Johnson said she was disheartened when she saw the mess. Though many students claim to be environmentally conscious, she said, she could tell students were probably to blame, due to most of the litter being alcohol containers.

While she was happy the area was cleaned, Johnson said the fact that it wasn’t done sooner without prompting it “raises a red flag” to her. This incident wasn’t an “isolated issue” — it’s only scratching the surface of the litter across the campus, she said.

She’s also noticed litter near McKeldin Mall and on South Campus has piled up more this semester than in past years.

“It’s saddening to see that nothing is being done for all this trash that’s been piling up everywhere,” Johnson said. “I wish more people would be considerate of others surrounding them.”

To Winnie Ho, president of the university’s chapter of the Sustainable Ocean Alliance, the trash pile near Knox Road had been a point of confusion. Unlike areas on South Campus that may not have enough trash cans, she said, this area has many trash cans nearby.

“Obviously this trash is just going to continue to be piled up,” Ho said.

[These UMD students are trying to minimize excess trash on campus]

She said that while SOA does do trash cleanup, the group usually cleans up areas such as the stream behind Looney’s Pub or areas where they know students frequently throw trash. The group is also going to try to find ways to do more trash cleanups in the College Park area while still abiding by COVID-19 guidelines, she said.

However, it’s a constant battle.

“No matter how many cleanups we do,” Ho said, “there will always be more.”

Both Johnson and Ho said they feel like the responsibility of prohibiting litter needs to fall mainly on the students.

“We share our homes here with other people, and it’s not fair to the residents of this town …to be forced to clean up the messes of students that know better,” said Ho, a junior communication major.

“We are the problem,” she said. “It’s important for us to take that responsibility.”

CORRECTION: Due to an editing error, a previous version of this story’s headline said the city of College Park cleaned the pile of trash near Knox Road. The city reported that College Park Towers staff cleaned the area. The headline has been updated.