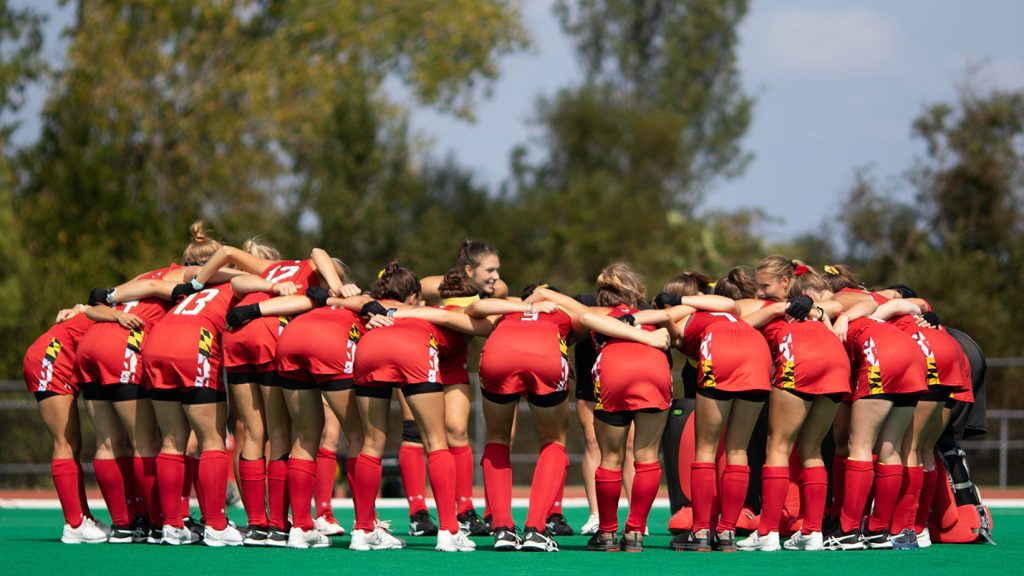 Before moving onto the University of Maryland’s campus for the first time, field hockey freshmen Logan Anderson, Anna Castaldo, Anoushka Chiswell and Rayne Wright got to know each other on a weekly Zoom call.

They talked about family, where they grew up and, of course, field hockey. But what has connected this group is coping with the COVID-19 pandemic together.

“We were going back and forth about how we felt about the situation,” Wright said. “It was a bonding experience, knowing that each of us were scared of what was going to happen.”

This summer, Maryland field hockey’s freshman players prepared each other to join the rest of coach Missy Meharg’s squad. And now, as roommates, they’re also dealing with daily student life.

“Sometimes we have our days and sometimes we don’t,” Anderson, a defender from Medford Lakes, New Jersey, said. “But each of us steps up one day after the other and pushes us to work harder … We are a great team, the four of us.”

Since uniting on the campus, the four Terps said, they have built a bond that extends beyond the field. Between shared courses, weekly practices, lifting sessions and the time they spend together at their shared on-campus apartment, chemistry is not proving to be a problem.

“Chemistry … is just so there for them right now,” Meharg said. “They love to see each other everyday.”

Wright said the unit has grown closer as it’s faced challenges in practice and in classes. When one of them has a difficult outing on the field or needs someone to edit their paper, they have a support system.

“Everybody helps everybody,” Wright said.

Chiswell was able to give her teammates a different perspective on playing field hockey through the pandemic. The former New Zealand U18 player was able to continue competing with minimal interruptions in her home country — largely due to the country’s handling of the COVID-19 pandemic.

The other three members had their senior seasons cut short as the pandemic spread. All three were expected to have banner years for their high schools.

However, Wright says she doesn’t plan to dwell on the loss.

“Maturity is the word for this whole pandemic, especially for kids our age,” said Wright, a defender from Bethlehem, Pennsylvania. “It was so saddening losing our senior year, but you just have to grow up and move on because time is of the essence.”

Since arriving at Maryland, they have been met with a rigorous regiment of fundamentals and skills-based training sessions.

Meharg said field hockey has become a sport of endurance — a concept her freshman cohort has bought into.

“It’s not all about competition right now, it’s about skill,” Meharg said. “And that’s ruthless to work on day in and day out … very rarely do you have that time as a fall sport to do that concentrated, outcome-oriented, skill work.”

Meharg noted the freshmen have kept pace with their upperclassman colleagues during practices so far. She believes it’s because they came to the team already fit and they treat practice personally.

As the team’s freshmen continue their time together on and off the field, this additional opportunity to connect with each other and their veteran teammates is invaluable to the high standards the program dictates.

“This is all that we know,” Anderson said. “It’s not what we were expecting but I think this … is a really great opportunity for us. I want to take advantage of that and be in this moment right now.”