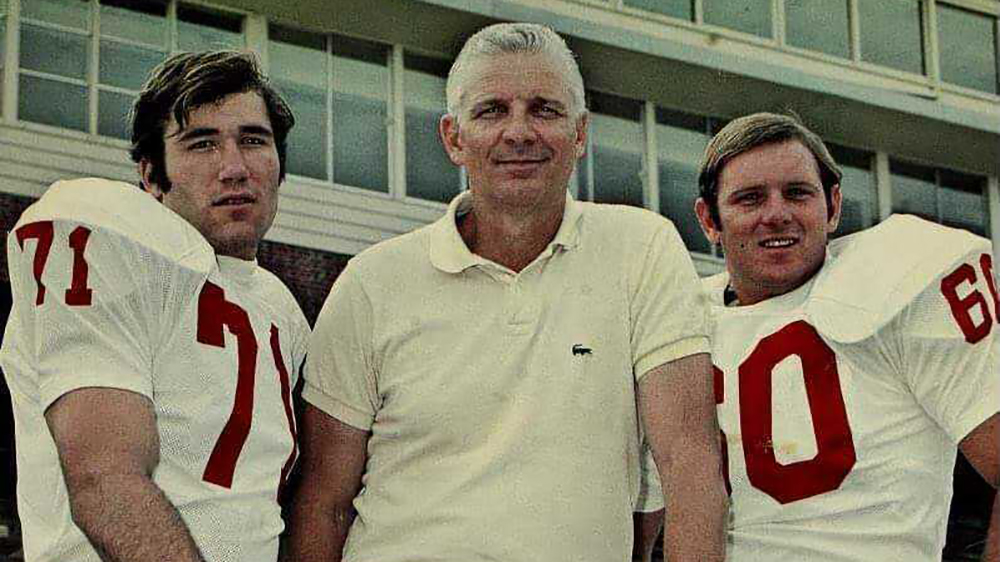 Despite a 7-25 record at the University of Maryland, Lester was one of the best high school coaches of his era, finishing his Richard Montgomery career with 25 straight wins. (Photo courtesy of Tom Lester)

Andy Phelps waited anxiously as Richard Montgomery High School’s trainer got the athletic tape out. It was 1965 and Phelps was a football-crazed middle schooler, concerns about his high school future swirling around in his head.

He didn’t fancy Woodward, his likeliest destination. He wanted to be where the action was, competing for state titles in front of thousands with the Rockets and their head coach, Roy Lester.

And come the end of the season, Phelps went to Richard Montgomery to meet with Lester — the tall, strapping man former players simply called “Coach,” whose West Virginia drawl sounded like it belonged in a western.

Soon after, Phelps was a Rocket.

“Playing for Richard Montgomery and Roy Lester was kinda like top-of-the-ladder,” Phelps said. “Everybody I knew wanted to go there and play there.”

Lester, described by family and friends as a “good man,” is remembered as a titan of high school football, winning several state championships across more than 30 years of coaching. The former Maryland football coach died in May of complications from COVID-19 at the age of 96.

And although his Terps career was blighted by poor results, Lester’s legacy in Montgomery County is unparalleled. On Sunday, he will receive the ultimate honor: induction into the Montgomery County Sports Hall of Fame.

For those who knew him, it’s an honor richly deserved.

“He is the only person that I know that possessed the qualities he did,” his daughter, Amy Lester, wrote in a message. “He was the type of man parents knew they could entrust their sons to.”

A stone-faced Phelps walked toward Gaithersburg High, ready to keep the Rockets’ win streak alive. The year was 1968 and Phelps had long forgotten what losing felt like. Richard Montgomery — the No. 3 team in the nation — hadn’t seen defeat for years.

Still, with an upstart Gaithersburg squad looking to steal a victory, the Rockets knew they had to be prepared. There was just one problem: They couldn’t take the field.

“There were so many people there,” Phelps said. “They had to have some cops come over and … split the crowd up so we could get down on the field.”

That was life at Richard Montgomery in the 1960s. And Lester, a former three-sport star at West Virginia who spent some time with the Philadelphia Eagles’ farm team, was the puppetmaster of it all, wielding his coaching philosophy to craft a national powerhouse.

He joined the Rockets’ staff in 1959 and immediately established them as state title contenders, going undefeated in each of his first two seasons in Rockville. It was a sign of things to come, with Lester’s squad finishing the season undefeated in six of his 10 years with the team.

Rockville couldn’t get enough, Lester’s son Tom said. From friends and family to crowds of 10,000, it seemed everyone wanted a chance to see the greatest show on turf.

“Everybody loved it,” Tom Lester said. “Rockville was a great place during a Richard Montgomery football game.”

Lester’s squad reeled off a 25-game undefeated streak. The Rockets’ success was no surprise, though. It was a product of Lester’s ability to find and cultivate talent, Phelps said.

He was a “hardass” who was clear in his expectations for his players.

But he was also charming, his wry quips told in that signature accent, drawing smirks from players and coaches alike.

“Roy had that sophisticated backwoods country boy attitude,” Maryland football and Richard Montgomery alumnus Mick Riggleman wrote in a text message. “If you were around Roy for 10 minutes, you were comfortable being with him.”

It was that personality — combined with an impressive record — that drew the attention of Maryland, hoping to rekindle its program after a decade more or less defined by futility. After 10 seasons and 86 wins with the Rockets, Lester made his way to College Park.

“I thought it was perfect for him,” Phelps said.

[Maryland football is ready to rely on its wide receiver depth]

“The greatest recruiter Maryland ever had”

Tom Lester remembers Oct. 17, 1970 fondly. The Terps were taking on No. 14 South Carolina at Byrd Stadium and his dad watched as Maryland went back and forth with a formidable Gamecocks squad.

As the final whistle sounded, Lester’s squad had secured a gutsy 21-15 victory. It felt like a breakthrough moment for the second-year coach, who was hoping to bounce back from a disappointing debut season.

“He had them going in the right direction,” Tom Lester said.

By that point, Lester had established himself as a top recruiter. He would fill prospects with confidence, drawing on the same strategies that brought him such great success at Richard Montgomery. He still had that wicked sense of humor.

He still had that charm.

“You played your best for Roy because he believed in you,” Riggleman wrote. “You didn’t want to let him down.”

Lester’s recruiting took the program up a level. Thirteen of his recruits ended up playing in the NFL, including Pro Football Hall of Famer Randy White. It was clear Lester was building a program to compete at the upper echelon of the college football ladder.

“He probably was the greatest recruiter Maryland ever had,” Amy Lester wrote.

But results matter, too. For all the optimism surrounding Maryland’s future, the losses were still piling up.

It wasn’t for a lack of trying, Tom Lester said. He still remembers the late nights his dad spent in Cole Field House, working away in the coaches’ office as he tried to right the ship.

Losses can breed tension, however. Lester had squabbles with athletic director Jim Kehoe, Amy Lester said. And after the Terps went 2-9 in 1971, Lester was ousted.

It was an unceremonious end to a promising, but disappointing tenure. Lester went 7-25 in his three seasons in College Park.

He also gave Ralph Friedgen his first coaching gig as coach of the freshman team, a move that paid dividends for the Terps some 30 years later.

“People that are better in the know really appreciate what he did,” Tom Lester said. “He just was as rock solid as it gets.”

“A god of coaches”

Every year, right around Christmas, a group of Richard Montgomery’s alumni gather to catch up and reminisce. Those wins, those crowds — they’re all discussed against a backdrop of slush and snow.

Roy Lester was a fixture of these reunions, the leader of a dynasty the likes of which Montgomery County hasn’t seen too often since.

That Christmas party won’t be the same anymore. Now, there’s a crater-sized void.

That culture he cultivated remains, though. It’s a bond rooted in their adoration and love for the man who left an indelible mark on each of their lives.

“Playing for Lester was like, I don’t want to say playing for a god of coaches,” Phelps said. “But he was right up there.”

That reverence continued in the years following Lester’s dismissal. Within a year he was back in Montgomery County, this time with Paint Branch. Three years later, he was a state champion.

But his roots were still tethered to the Rockets. And in 2002, the house he built — Richard Montgomery Stadium — was renamed in his honor. It was a high point in his career, Phelps said.

This recognition might just top that, Lester’s family and friends say. He was an institution in Rockville and across Montgomery County. His name still carries weight in football circles across the region.

“He believed his jobs at Allegheny, Richard Montgomery, Paint Branch and Magruder were every bit as influential and important as being the head coach at [Maryland],” Amy Lester said. “He changed so many lives.”

It’s this mindset that rings true in the minds of his family, his friends and his former players as they prepare for Sunday’s online ceremony. There will definitely be tears, Tom Lester said.

But there will also be laughs and hugs and smiles, too. That’s just who Roy Lester was — a tough-talking charmer who wanted the best for those he met.

For some, he was dad. For others, he was a friend.