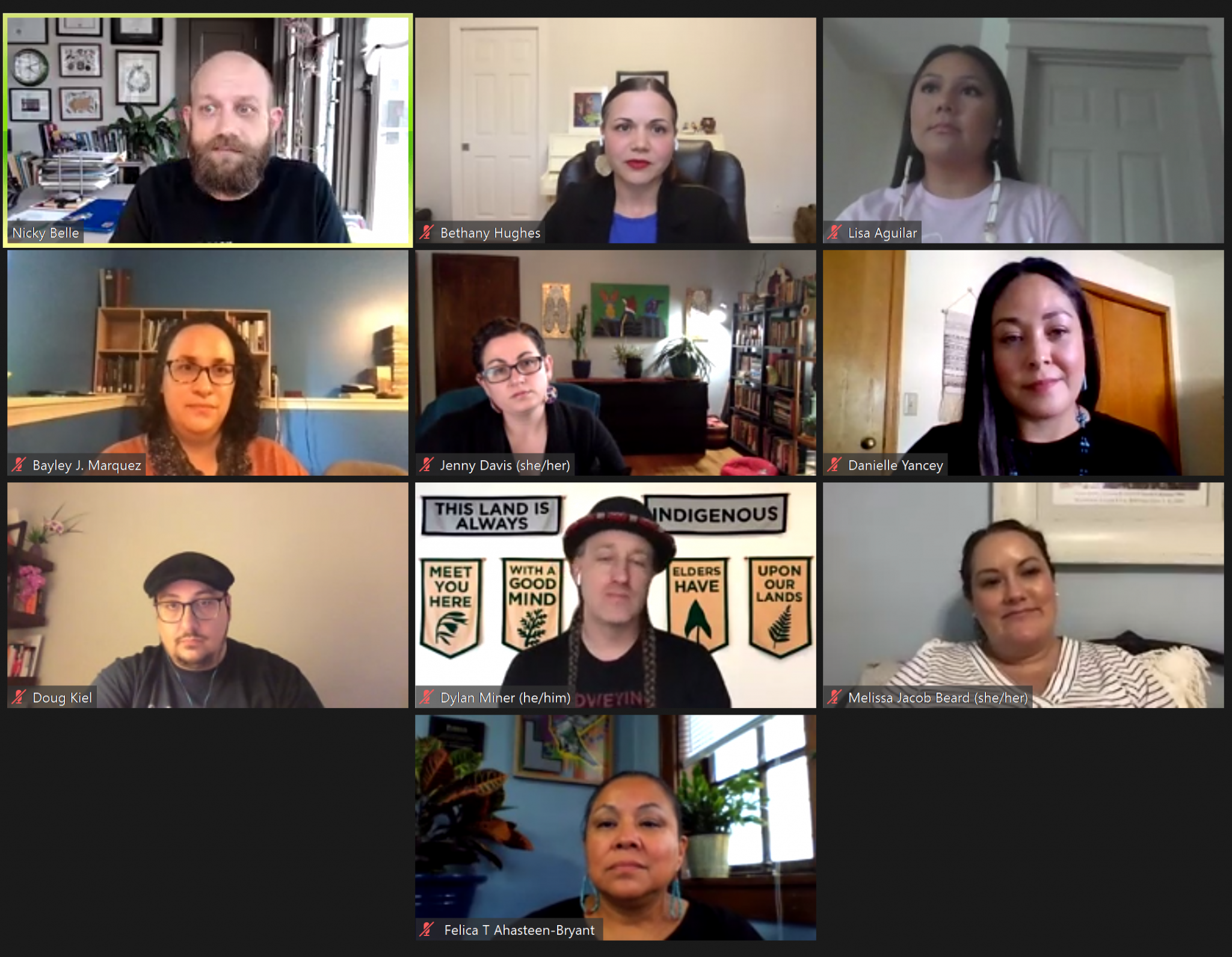 Academics in the Big Ten Native Alliance gathered on Zoom on Indigenous Peoples' Day for an event called “Sovereignty and Indigeneity in the Big Ten: Telling Our Stories." (Lyna Bentahar/For The Diamondback)

The panel discussion, called “Sovereignty and Indigeneity in the Big Ten: Telling Our Stories,” hosted indigenous scholars from nine universities in the alliance, including Bayley Marquez, an American studies professor at the University of Maryland and citizen of the Santa Ynez Band of Chumash Indians.

During the discussion, the panelists spoke about how they have worked to integrate Native history and culture into their respective universities.

“The work we do on campus is the national culture,” said Bethany Hughes, a professor in the American culture department at the University of Michigan and citizen of the Choctaw Nation of Oklahoma.

The panelists and their university’s tribal cultural and engagement centers represent a small percentage of each of their student populations. For many universities, self-identifying Native students comprise less than one percent of the student population. The number of students actively involved in their tribes is even smaller — it’s sometimes as few as 15 students. As of 2019, 30 undergraduate students at the University of Maryland self-identified as Native American or Alaskan Native.

To Hughes, the small indigenous communities on the Big Ten campuses and the hiring of Native American faculty have been signs of growth, even as there is a lot of work to do.

“There’s things happening which mirrors [a] national culture that is becoming more aware and more open to native and indigenous issues,” Hughes said. “Things like Standing Rock, things like the Washington Football Team.”

Hughes is referring to national protests in 2016 and 2017 to block the Dakota Access Pipeline from encroaching on the Standing Rock Indian Reservation and the Washington Football Team’s decision in July to change its name from a Native American slur.

As part of that growth, panelists said they have created partnerships with tribal communities by integrating their traditions and histories into curricula. In doing so, the scholars said, they hope to make indigenous issues a part of everyday conversation on their campuses.

“[It’s] taking the work that I would normally be doing in communities and kind of reversing that process and bringing it to campuses,” said Jenny Davis, a professor at the University of Illinois at Urbana-Champaign and citizen of the Chickasaw Nation.

Integrating that tradition usually has to start with the very basics, said Felicia Ahasteen-Bryant, director of the Native American Educational and Cultural Center at Purdue University and a citizen of the Navajo Nation. Non-indigenous peoples are largely unaware of concepts such as land acknowledgment — the practice of acknowledging the land of the tribes that one stands on before beginning an event — and tribal sovereignty, the distinct right of Native American people to govern themselves, Ahasteen-Bryant said.

Tribal sovereignty in particular has historically been threatened by land-grant universities in the Big Ten, including the University of Maryland. This university is built on land from the Piscataway Conoy Tribe, and has had over 200,000 acres of indigenous land granted to it as a land-grant institution, according to data by High Country News.

“The history of land grants and the land grant university in the U.S. is so much based on the expropriation of indigenous land,” said Doug Kiel, a professor at Northwestern University and citizen of the Oneida Nation. “I think that it’s incumbent on us as an educational institution to actually lay bare the interconnectedness of those histories.”