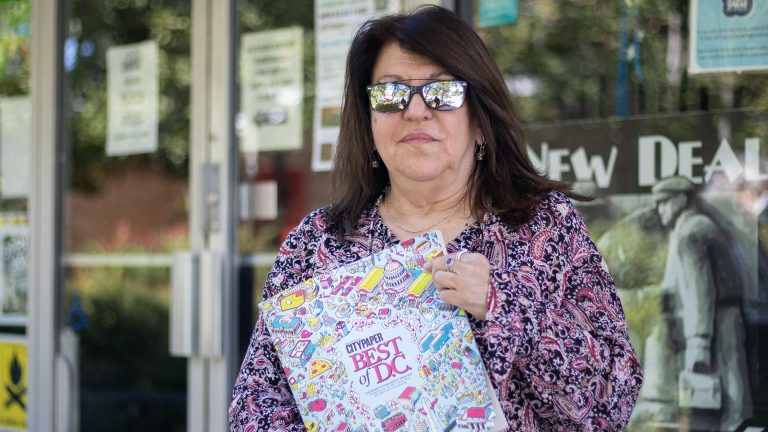 For Amethyst Dwyer, the New Deal Cafe in Greenbelt is like home.

As a cooperative, restaurant and bar that acts as a small music and art venue, New Deal Cafe is a vibrant space for patrons to enjoy. Everything changed, though, when it had to close due to the coronavirus pandemic, making the decision just days before Maryland Gov. Larry Hogan ordered the state’s restaurants and bars to close in March, Dwyer said.

Despite the monthslong closure, the cafe won three awards in the Washington City Paper’s Best of D.C. contest, including “Best Place to Experience Local Music.” The cafe received some government funds and reopened July 30 with patio seating only, and now it’s open with limited indoor seating.

However, Dwyer said, the cafe is still struggling to stay afloat with less indoor seating and no in-restaurant music performances. Per Prince George’s County regulations, restaurants can’t have more than 50 guests indoors, and tables outdoors must be at least six feet apart — making for less customers.

But in spite of the challenges, the New Deal Cafe is hoping to stay a community fixture for years to come, thanks to the help of the cafe’s supporters and a new online auction.

Arlene Kaminsky, a self-described “fan” of New Deal, saw the cafe’s need early on in the pandemic and volunteered to plan a benefit auction to help raise money. She first went to the cafe a few years ago.

Kaminsky has coordinated auctions before, but never online. She said she figured this auction would be easier because she didn’t have to get a venue, food or drinks.

The “Let’s Make A New Deal” virtual auction carried more than 150 items; some musicians even donated music lessons. It opened on Sept. 7, and in its last few days, the auction has already met more than 80 percent of its $15,000 goal.

“The community is amazing and the support that kept going was unbelievable,” Kaminsky said. “I don’t think it would have been as successful as it is, without those people, that particular community of people. The donors, the musicians, the artists just gave themselves in any way they could.”

With the pandemic also impacting other businesses and organizations, getting donations was challenging for Kaminsky, but they were excited to have the Beltway Plaza Mall sponsor the auction, she said.

Dwyer said that she’s been thrilled by the auction’s effect. When she first heard the idea, she knew it could really make an impact, she said.

It’s also great, Dwyer said, because those who contribute can really feel like they’re a part of helping New Deal survive. At its core, that’s what the cafe is to her — a place where everyone can feel included.

“It’s the space that is open to anyone and everyone. It’s a community living room, where you know you can go and hang out and meet friends,” Dwyer said. “It’s a wonderful place for people to connect, just as human beings.”

Mark Cheater, a member of the cafe’s board of directors, added that donations are the “lifeblood” of the business now.

Cheater played as a percussionist with his band monthly at New Deal Cafe before filling a vacant seat on the board a year and a half ago. He’s played at the cafe with three or four different bands, dating back about 10 years, he said. Cheater and his girlfriend moved from Washington to Greenbelt because of the cafe. In his time with the venue, this is the biggest challenge he has seen.

“Restaurants, typically, in the best of times, operate on a razor-thin margin,” he said. “And we just got the rug pulled out from under us.”

Nonetheless, Cheater said the New Deal Cafe is now celebrating 25 years of being open, and they hope they will get 25 more years.

Dwyer said she is thankful for Kaminsky, because she has “taken the bull by its horns” in coordinating the auction. The support of the community, she said, has been their saving grace.

“Everyone is a part of keeping the cafe alive,” Dwyer said. “My saying now is, ‘Long live the New Deal Cafe.’”