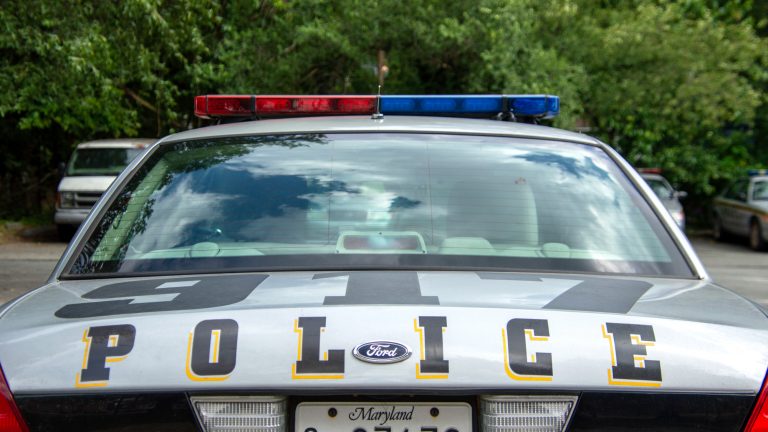 A police car from the University of Maryland Police Department sits in the parking lot behind St. Andrew's Episcopal Church in Old Town on Sept. 4, 2020. (Joe Ryan/The Diamondback)

As the University of Maryland reopens and many students return for the first time since March, here’s a roundup of the incidents police responded to in College Park while most students were away.

Two deaths occurred near the campus over the summer: one in June, on the 4800 block of Calvert Road, and one in July, on the 8000 block of Regents Drive

The Prince George’s County Police Department, which has jurisdiction over the two investigations, did not provide additional information about the deaths in time for publication, after multiple requests.

Out of the 155 total incidents University Police responded to on or around the campus from the beginning of May to the end of August, there were 34 reported cases of theft, according to the daily crime log.

During this period, some of the most common items stolen included bicycles and items taken from campus offices, University Police spokesperson Sgt. Rosanne Hoaas said.

Since many campus buildings are unlocked during regular business hours and the campus is easily accessible to many people, Hoaas said there are often opportunities for theft to occur.

University Police were informed of an on-campus hate bias incident on July 2, according to the daily crime log.

On June 15, a male employee received a voicemail offensive toward the African American community on his office phone in Taliaferro Hall, according to a police report sent by Hoaas. The caller, who had no university affiliation, was identified and was issued a cease-and-desist order, the report read.

This hate bias incident is a case University Police “want our community to know about, because it’s important to us,” Hoaas said. “That is something, as a community here, we don’t tolerate.”

University Police responded to six cases of fraud over the summer, four of which occurred within two weeks of each other, according to a UMD Alert released by the department in late August.

The victims of the fraud cases were contacted by email or phone in four cases, the alert read. The callers would pretend to be from a government agency, an employer, an electric company or immigration-related law enforcement, using false accusations and fear tactics, according to the alert, and would convince the victims to buy gift cards or bitcoins as payment to deter further action.

No arrests were made in any of the six cases, and the investigations are still pending, according to the daily crime log.

University Police responded to several incidents of marijuana possession over the summer, according to the daily crime log.

On Aug. 29, University Police responded to a CDS violation in Ellicott Hall reported by Department of Resident Life staff. According to a police report sent by Hoaas, a police officer detected the smell of marijuana from a resident’s room. Two students gave the officer a bag containing less than 10 grams of marijuana and were issued a civil citation, and were referred to the Office of Student Conduct, the report read.

A search of the vehicle revealed an amount of marijuana over 10 grams along with other items that would indicate distribution, the police report read. The passenger was charged, according to the report.