UMD journalism students contribute to story about evictions amid COVID-19 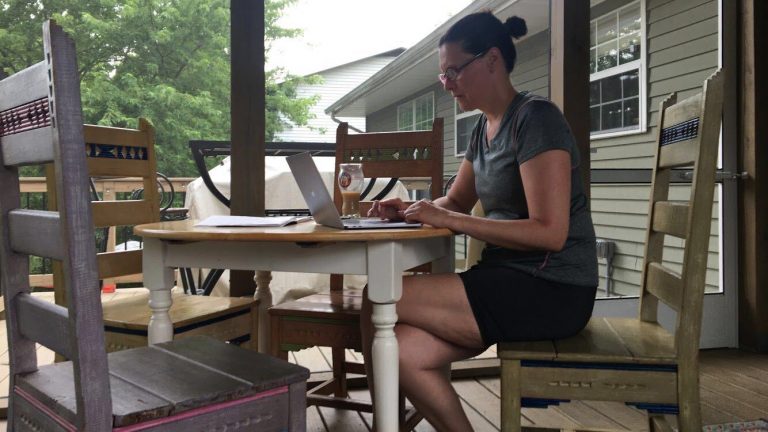 Brenda Wintrode, a journalism graduate student at the University of Maryland, works on the Howard Center’s eviction story on her back deck, where she reported from all summer. (Photo courtesy of Brenda Wintrode)

Wintrode had been communicating with people involved with the nonprofit over the past couple of months. She was the lead writer for a project on evictions following the passage of the federal Coronavirus Aid, Relief, and Economic Security Act, which prohibited landlords whose properties’ mortgages were backed by federal programs from filing to evict tenants or charging them late fees for 120 days after its enactment.

But this time, when she spoke with the executive director of the rental assistance program, Wintrode wasn’t gathering information for her story.

The project had been published the day before, and the program was calling to let her know that it had made a difference: support was pouring in for Ashley Fitzgibbon, an Oklahoma City resident featured in the story.

“I’m new to journalism, so I don’t know how often you get an immediate reward like that,” Wintrode said. “But it felt pretty good, and it made all of the long days really worth it.”

[“He can do anything”: UMD alum Robert Klemko shifts from covering sports to COVID-19]

The piece, which included a featured article and five case studies, detailed instances in which the federal act had failed to protect tenants from the possibility of being evicted from rental properties due to their inability to pay rent amid the global pandemic.

Fitzgibbon, a single mother of six facing eviction, has managed to keep herself and her family in their home so far by selling her car, borrowing money and working odd jobs.

The day after Wintrode received the call from the nonprofit rental assistance program, she found out Fitzgibbon had been put in touch with a caseworker, Wintrode said.

“[The piece] made a difference for one person,” Wintrode said. “We can only hope that our journalism made positive impacts in other ways.”

Led by the Howard Center for Investigative Journalism and published by Capital News Service, The Associated Press and Gannett, the project quickly attracted national media attention, with the featured story getting picked up by publications including The New York Times.

Students and faculty at this university collaborated with others from the University of Arkansas, Boston University and Stanford University, working to collect data and to interview sources.

Over the summer, the team looked at 10 counties where at least a fifth of the population was spending 50 percent or more of their income on rent prior to the pandemic.

The counties already had historically high eviction rates, said Kathy Best, director of the Howard Center. So, the team decided to investigate how the federal government’s eviction moratorium — a prohibition of action — was playing out in those areas.

“We decided to take a really deep dive into that moratorium and find out: was it working?” Best said. “And if not, why?”

Ryan Little, a journalism graduate student at this university and a data reporter on the project, explained that the team’s investigative process included identifying areas around the country where eviction court cases had occurred following the passage of the federal act.

The team compared the addresses of the eviction cases with census data from the U.S. Census Bureau, Little said, allowing them to learn the demographics of the areas they were studying.

Little thinks the piece “did a really great job of showing what has actually happened” across the country as “communities have tried to interpret” the federal act after its enactment.

“I think the team of reporters and editors and data journalists that we had did an excellent job of starting with a very tough project,” Little said, “and turning it into a story about people having a tough time.”