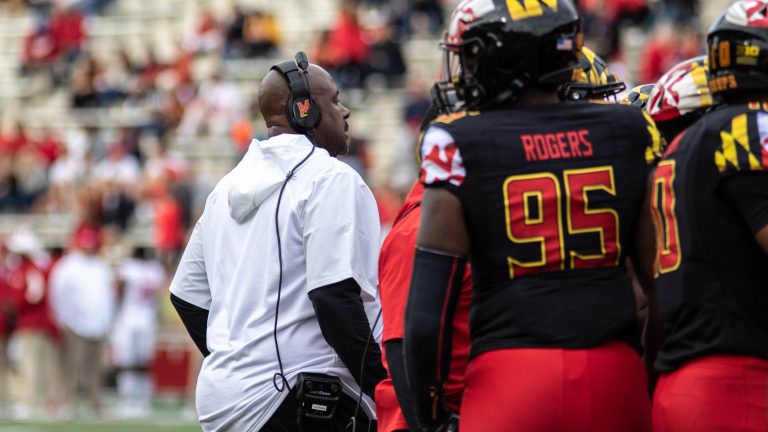 When the University of Maryland halted all athletics activities on Sept. 3 after a COVID-19 outbreak among athletes, head football coach Mike Locksley and his squad weren’t exactly fazed. At this point in 2020, the team is used to the uncertainty brought about by the coronavirus pandemic.

“We understood that this would be a unique year,” Locksley said. “Because of how fluid things are … we decided as a team and a football organization to really focus on what rules we have today that we can play by.”

Prior to the stoppage, the Terps were practicing for about 12 hours per week, Locksley said. Most of that was dedicated to weightlifting, conditioning and film study, but the team would occasionally hit the field for more specific skills work.

Locksley has also been in regular meetings with other Big Ten coaches and conference leaders discussing the logistics of conducting a football season. But a theme of uncertainty rings through those calls, the same way it has since the pandemic began. And that’s something the second-year head coach has come to realize is the new norm.

The Terps first experienced it in mid-March when spring practices were paused and ultimately canceled as the virus began to spread across the country. Voluntary workouts returned in mid-June, only to be suspended for more than a week in July after several players and staff tested positive for COVID-19.

The picture became clearer once August hit, as the Big Ten released the revised, conference-only schedule and full practices resumed. But on Aug. 11, the conference canceled the fall season, and Maryland was once again left directionless, still working out but with no real sense of the future. And now that 46 athletes have tested positive for COVID-19, those plans have changed once again.

“It’s still unfolding in real time … and I can only focus on what we can control,” Locksley said. “If I tried to plan and organize things too far out, a lot of times there would be so many changes prior to that that you’d change anyway.”

With the momentary pause in face-to-face interaction for the time being, the Terps have been working out individually to the best of their ability, with Locksley sending daily workout routines for the players to complete using whatever equipment they have at home or a gym.

“We’re practicing … as if the season is coming up right around the corner,” offensive lineman Marcus Minor said. “We’re just really trying our hardest to keep moving forward even though things have been stagnant for the most part.”

“The biggest thing … has been to stay ready, so you don’t have to get ready,” wide receiver Brian Cobbs said. “And expect the unexpected.”

While the Terps remain in a holding pattern for now, they may get more clarity soon. The Big Ten presidents and chancellors are reportedly set to vote on a return-to-play protocol in the coming days, and games could reportedly resume as early as Thanksgiving.

Until then, Maryland will continue to work on a day-by-day basis. It’s what’s needed to combat the constant changes caused by the pandemic. But no matter how it evolves, the end goal is the same.

“We all want to play, but we want to play in a safe and healthy environment,” Locksley said.