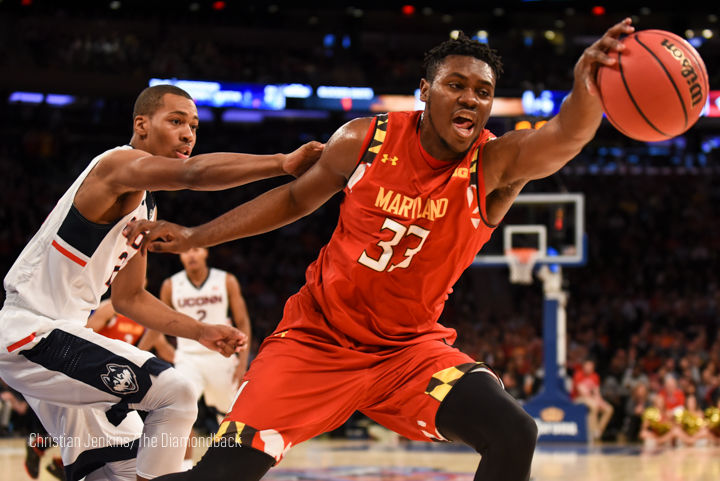 Center Diamond Stone reaches to stop a loose ball from going out of bounds when the Terps defeated Connecticut, 76-66, in the Jimmy V Classic at Madison Square Garden in New York on Dec. 8, 2015.

With the NBA and nearly every other sport in the United States on hiatus, The Basketball Tournament completed its first round of games on July 4-5 and former Maryland big man Diamond Stone was dominant in front of a national television audience on ESPN.

Playing for No. 22 seed Sideline Cancer, Stone had 19 points, six rebounds and two blocks while primarily matched up against former Wisconsin star Ethan Happ as Sideline Cancer ultimately defeated No. 11 seed Team Hines 93-91. Stone even displayed his newfound three-point shooting stroke before he left the game in the fourth quarter with an injury.

Sideline Cancer will play Team Challenge ALS on July 7 at 2 p.m. on ESPN.

The 23-year-old Stone has yet to make an impact in the NBA since he was drafted in the second round of the 2016 NBA Draft but he showed the potential that he displayed during the 2015-16 season with the Terps.

During his one season with the Terps, Stone averaged 12.5 points, 5.4 rebounds and 1.6 blocks per game. After he was drafted by the Pelicans, he was immediately traded to the Clippers on draft night. Stone only played 24 minutes for the Clippers during the 2016-17 season and has since bounced around the G-League.

If Stone can recover from his injury in time for Tuesday’s game, he may have a chance to put up another dominant performance against the under-sized Team Challenge ALS.