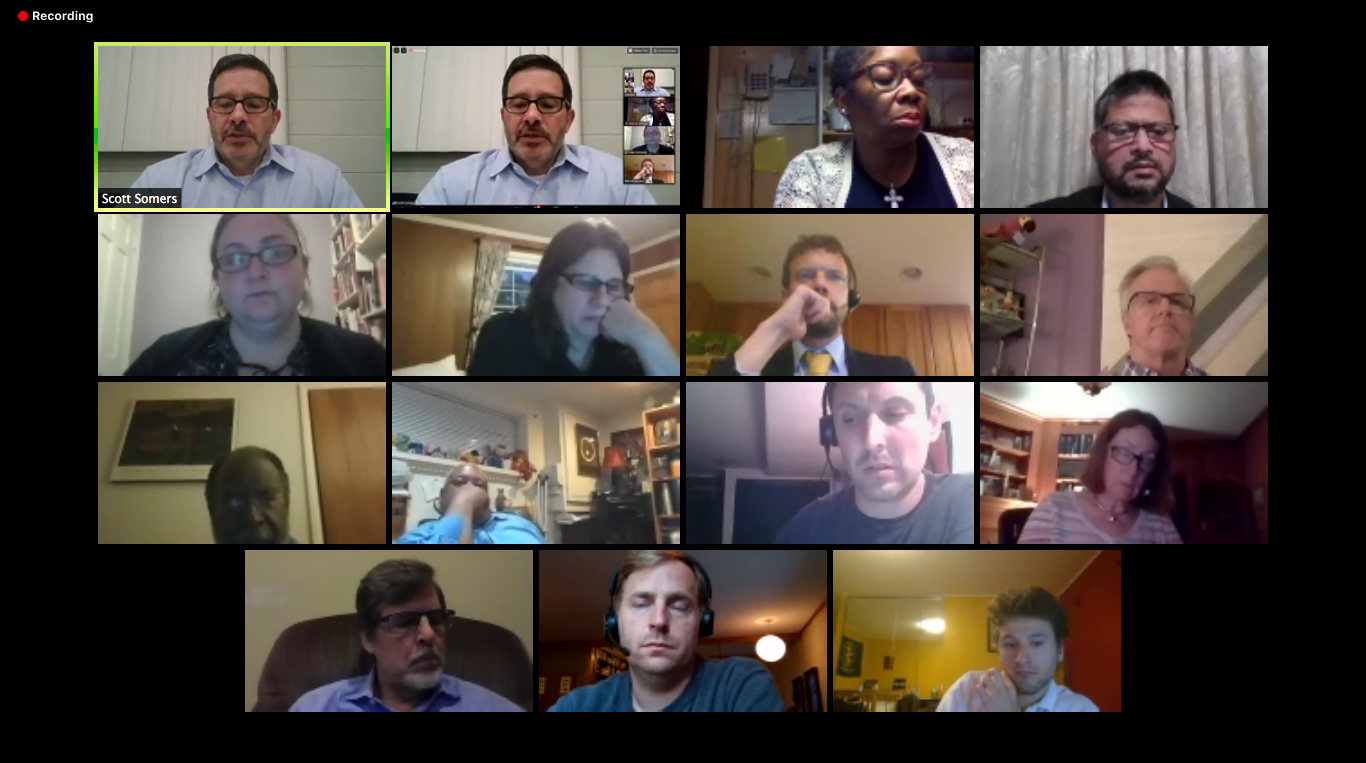 The College Park City Council met over Zoom on May 26, 2020. (Clara Niel/For The Diamondback)

The College Park City Council unanimously agreed to create four new economic assistance programs for residents and businesses during a Zoom meeting Tuesday night in its latest attempt to aid those who have hit tough financial times during the coronavirus pandemic.

City manager Scott Somers said the plan is for these programs to be partially funded by the CARES Act, which Congress passed in March to provide assistance for state, local and tribal governments through the Coronavirus Relief Fund. Prince George’s County has already received money from this act and will distribute funding to municipalities based on their population.

The city submitted a plan for funding from the county earlier this month and is still waiting to hear back, Somers said. Until the plan is approved, some funding for the programs will come from city savings, he said, but this money will be reimbursed by the CARES Act if the plan is approved.

The county has allocated about $1.95 million to College Park. City staff and the Economic Assistance Subcommittee are planning for $1.5 million of this money to go toward the newly created programs and for the rest to be used for other coronavirus-related measures.

The city had already enacted minor relief efforts earlier this year, such as halting parking payments in certain areas. During a council meeting on May 12, the council enacted its first major short-term economic relief program for businesses, agreeing to waive business renewal licenses, suspend business sign and advertisement requirements and send letters to landlords asking them to delay or forgo payments from tenants.

On Tuesday, council members agreed to take additional steps to help businesses, creating the Small Business Assistance Grants Program. With a projected $1 million budget, the grant aims to give financial aid to businesses with fewer than 25 full time workers that have been affected by social distancing measures or closures, whether voluntary or involuntary.

Under this program, eligible business owners can receive a maximum of $15,000, paid out in three installments. To be eligible, businesses cannot have more than 10 outlets or be part of a national franchise. They also need to have been operating as of Jan. 1 of this year.

After some discussion and many questions, the council also passed a program for emergency financial aid for families, senior citizens and other individuals.

This program will provide financial assistance to College Park residents who have struggled with expenses during the pandemic, including rent or mortgage payments needed to avoid eviction or foreclosure, utility payments, unanticipated funerals and other payments deemed necessary by the city.

A household can receive up to $5,000 in assistance if its application gets approved. But residents will need to show evidence both of need and of the payment’s necessity, Somers said — evidence of furlough or a late mortgage notice from the bank, for instance.

Although District 2 Councilman P.J. Brennan voted to approve the program, he wondered if it should include a more objective list of criteria a person must meet to be deemed eligible. He pressed the city to delve deeper into developing such a list, in case too many applications for aid came in.

“I hope we’re not in the position where we have to rank people based on need given the pot of money we have, but those are the things that I think we need to be prepared to face so that we’re not having to set expectations after the fact,” Brennan said.

Considering many College Park residents are also students, council members also asked how students could qualify for this program. District 3 Councilman John Rigg expressed that the Pell Grant — or other student financial aid documentation — should also be on the list of acceptable evidence to apply.

District 4 Councilwoman Maria Mackie echoed Rigg’s concerns, saying the council should also explore expanding the list of acceptable documentation to include FAFSA and other types of financial aid that would allow a college student to be eligible for the program.

Another program approved further funding for nonprofits, including $20,000 to both the city’s Meals on Wheels program and its food bank. The final program devoted $150,000 to help fund improvements that will enhance businesses and the overall commercial district.

The subcommittee and city staff also proposed the creation of a program that would motivate residents to shop at open College Park businesses, but Somers recommended that the council hold off on its approval until all of its details are sorted out. As proposed on Tuesday, $200,000 would be devoted to this program, which would work sort of like a reward or voucher system for residents, Somers said.

“It’s a very complex system,” Somers said. ”We’re looking at what some other cities are doing, but we’re not quite ready to roll it out with a level of recommendation or confidence tonight.”

District 2 Councilman Monroe Dennis ended the council’s discussion over the programs by expressing his gratitude for the efficiency with which the city answered the council’s questions. This demonstrated the energetic discussions the subcommittee had held, Dennis said.

“I believe we have a workable, meaningful program here, and I’m looking forward to my colleagues approving this motion,” Monroe said.