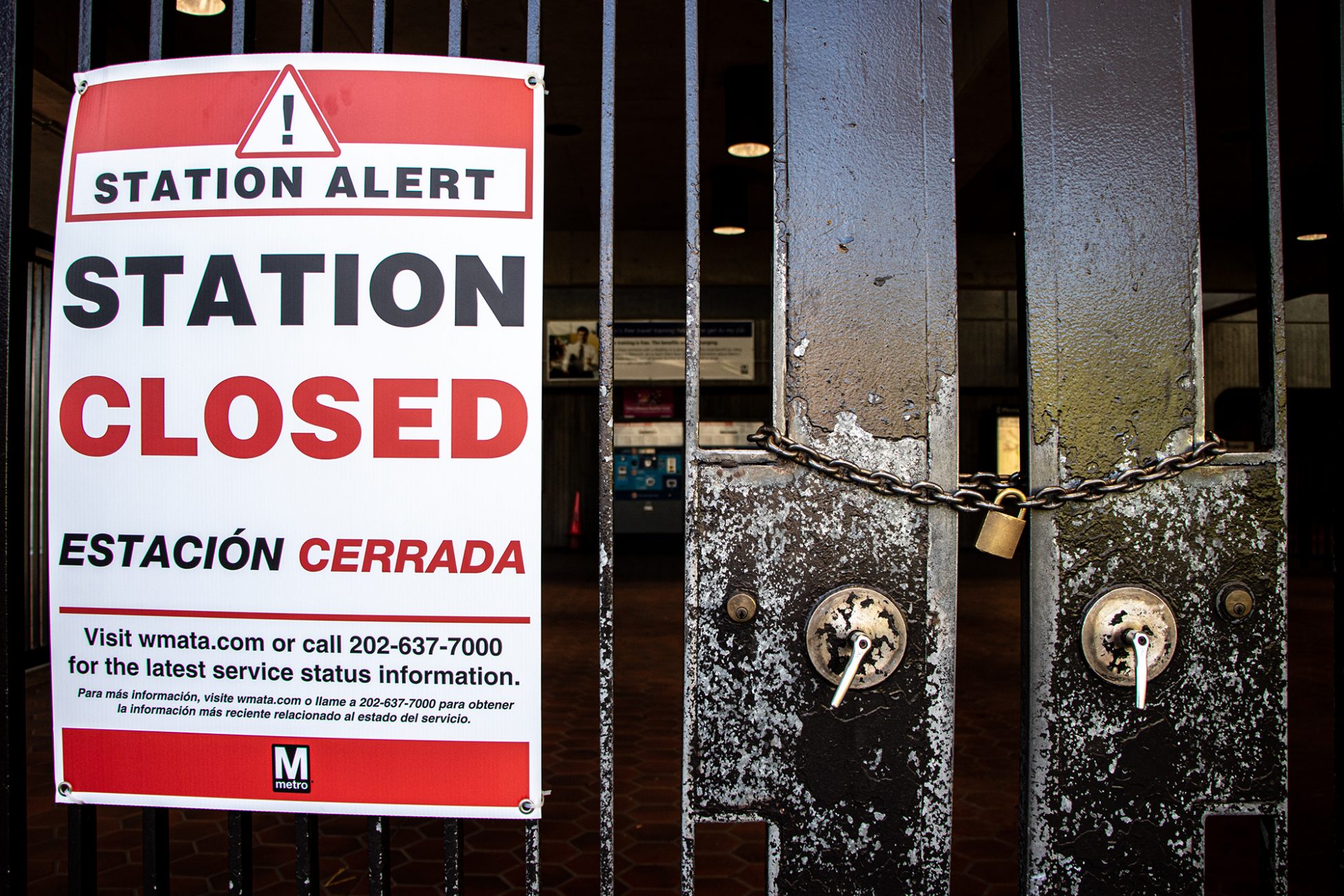 Along with many other WMATA metro stations and bus stops, the College Park metro station has been closed since March 26, 2020. (Julia Nikhinson/The Diamondback)

By Anaya Truss-Williams
For The Diamondback

With the coronavirus pandemic halting typical daily routines, Washington Metropolitan Area Transit Authority is promoting social distancing by urging the public to stay home and only use public transportation for essential travel if no other options are available. Metro travel has been restricted by reducing routes, closing stations and limiting service hours.

But even if restrictions are lifted by the summer, local transit riders might still see their service affected due to budget changes for WMATA’s next fiscal year, which starts July 1.

The budget proposal outlined over 30 bus routes to be cut or operating on reduced hours, including the C4 (Greenbelt-Twinbrook) and B30 (Greenbelt-BWI Thurgood Marshall Airport Express) that operate not far from this university.

WMATA’s board of directors voted for the adoption of the FY2021 budget April 2 with some changes — among them the B30 and two other routes would be saved from elimination this year — after public feedback.

“Most of the changes proposed include restructuring of routes to improve efficiencies and eliminating redundancies in areas served by multiple bus lines, part of a handful of routes under consideration to be discontinued, ” Ian Jannetta, a WMATA spokesperson, wrote in an email.

Ian Rowe, a College Park resident of about 11 years, said he relied on the B30 heavily as a biochemistry doctoral student at the University of Maryland.

It is one of the most cost-effective ways to get from Prince George’s County to Baltimore-Washington International Thurgood Marshall Airport and started running in 2001. Today, fare is $7.50 using a SmarTrip card or cash, and $3.75 for seniors and people with disabilities.

Conscious of his carbon footprint, Rowe prefers public transportation when traveling to the airport. Over the years, he’s seen the B30 route change — from fare increases to the elimination of weekend service.

As a graduate student, he flew out of BWI frequently. He said he liked the low cost and convenience of taking a bus directly to the airport. Now, he flies a few times monthly for work but no longer tries to get flights out of BWI because of reduced B30 service over time.

“It’s a lot cheaper to take the bus B30, but trying to make that work into my schedule now is impossible,” Rowe said. “I’ll go to Dulles sometimes just simply because I can get a reliable bus there, even though it’s a longer ride.”

The B30 is only scheduled to run every 60 to 70 minutes on weekdays.

“Trying to catch that B30 is much more difficult because they don’t run it as often, and it doesn’t run at all on weekends, which is a real shame,” Rowe said.

Some less affluent areas will be affected by the service changes. In Burtonsville, Maryland, for example — an area about 13 miles away from this university — changes to the Z6 line will affect a community that had a per capita income of $37,463 as of 2018, according to the U.S. Census Bureau. The Z6 will reroute some of the cut Z8 line, but will not stop in Burtonsville.

“When the bus service [halts], [riders] need to scramble to figure out how to make trips that they used to do,” said Hiroyuki Iseki, a research faculty member with the National Center for Smart Growth and professor of urban studies and planning at this university.

Iseki said he isn’t surprised the transit getting cut and reduced is relied on by commuters and low-income communities. Those groups are generally “disproportionately negatively impacted” in scenarios of reduced bus service, he said.

“I definitely see people on the B30 and the 5A that are commuting to work,” Rowe said. “Now, they’re going to be hurt.”