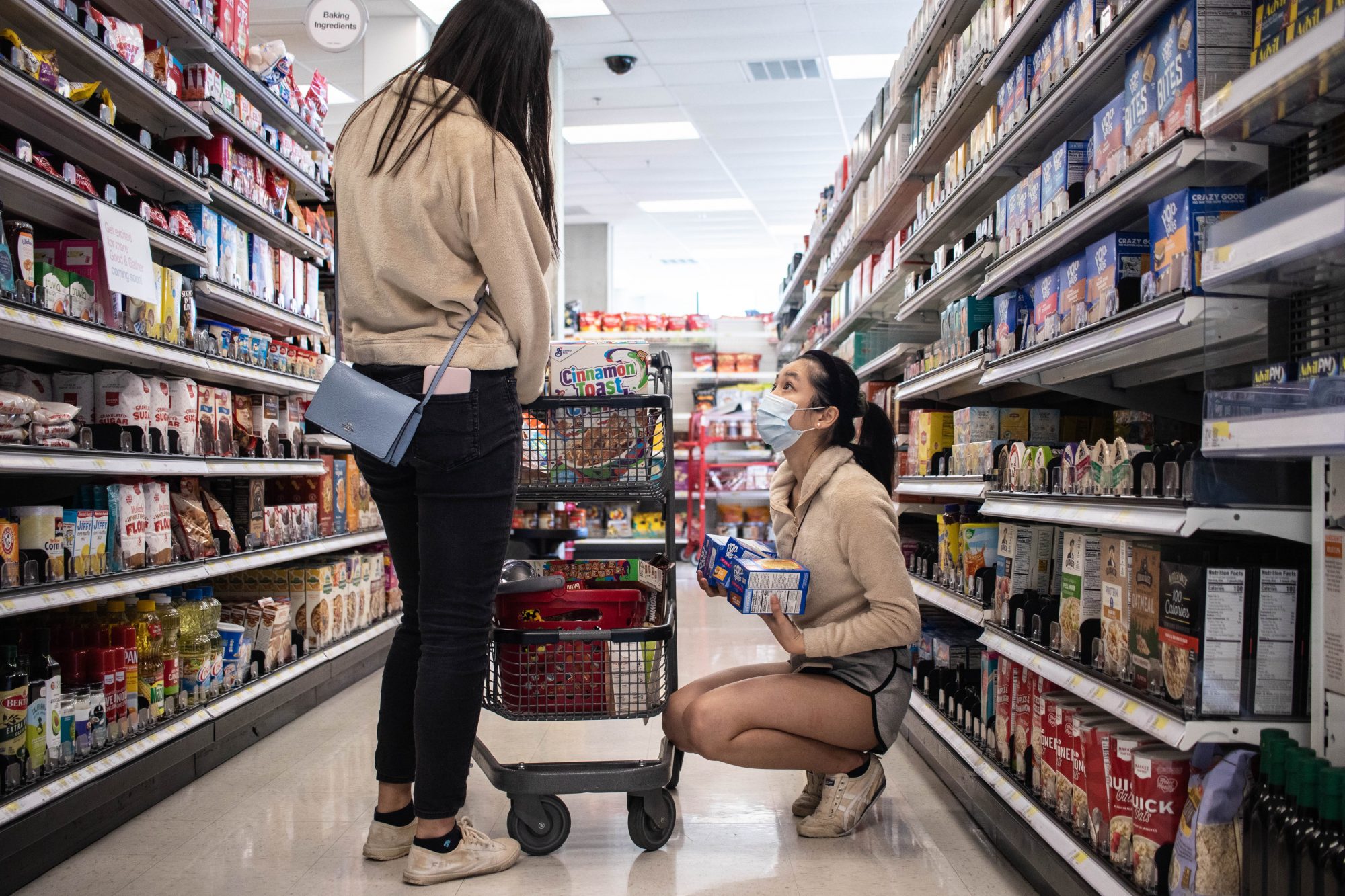 Lately, mornings at the Whole Foods Market closest to College Park have taken on a predictable flow for employees.

They walk through aisle after aisle of empty shelves, restocking the chicken, the canned beans and soup, the frozen vegetables — items that have vanished the fastest in recent days. Two hours later, everything has cleared out again.

“Every day is like we’re preparing to feed everyone for the Super Bowl,” said Max Ward, a senior English major at the University of Maryland who works behind the raw meat counter at the store.

As the novel coronavirus outbreak tears across the globe, grocery stores in the U.S. have faced shortages as the supply for food and health care items lags behind demand. Things are no different in and around College Park, where employees who have been deemed “essential” struggle to keep up as shoppers anxiously overload their carts.

Ward said he’s watched as customers stocked up on as many food items as they could since the beginning of February. The store ran low on certain products — particularly meat — for about four weeks because of how frantically people were shopping, he added.

Many shoppers have worn masks and gloves and seemed fearful they would not be able to get everything they needed, Ward said. He found that interesting, considering how the supply chain remains intact, despite the spike in demand. For instance, to meet increasing customer need for chicken, a manager at Whole Foods confirmed that the store has been buying products from new brands and farms.

Management deferred to a corporate media email for comment. Representatives did not respond to requests for comment to that email address.

A little over a mile away, the Hyattsville Safeway is experiencing a similar rush of shoppers, with people quickly buying up products such as milk, eggs and cleaning supplies.

“The stores are having to restock more often, and our warehouses are having to send deliveries more often,” said Beth Goldberg, the senior manager for the eastern division of Safeway. “As soon as the items hit the shelves, they’re gone within a few hours.”

In an effort to discourage shoppers from buying an excessive amount of some products, such as toilet paper and paper towels, many stores have set limits on how many can be purchased at a time. Other stores, such as the Rockville Whole Foods Market, have restricted the number of people who can be shopping at the same time.

Meanwhile, some College Park residents have faced new difficulties in filling their pantries and refrigerators each week.

Caitlin McCann, a senior communication and English major still living in College Park, says the shelves at Lidl have been emptying faster than they usually do. The basics — eggs, for instance — are usually what go first, she added.

“There’s definitely food there, it just might not have been what you would normally buy,” she said.

For city council member Maria Mackie, buying enough food for her husband and four kids has proven to be a challenge. She said her family was only able to find two packages of chicken at Aldi, which they ate for dinner on Sunday.

“It’s been tough,” said Mackie, who’s used to stocking up on chicken to keep in her freezer.

Management at Lidl declined to comment on how the coronavirus has affected the business so far, and Aldi representatives were unable to be reached for an interview, as the store’s phone number has become unlisted due to limited staffing.

Mackie has also been shopping for her mother and an elderly neighbor, whose age puts them at a higher risk for severe illness from the coronavirus, according to the Centers for Disease Control and Prevention. She has brought them meals and household necessities, such as toilet paper and paper towels, so they don’t have to go shopping themselves.

Mackie added she’s been taking precautions — keeping gloves and hand sanitizer in her car, for instance, as well as wiping down a cart before using it — when shopping for her family and elderly neighbors, since one of her sons has two autoimmune diseases.

“This is his life,” Mackie said. “We have to be really careful.”

Back at Whole Foods, Ward said store managers are trying to protect their employees — giving them gloves and hand sanitizer and keeping people apart from one another in lines. They also recently started measuring workers’ temperatures to check if they have a fever, Ward said.

At a time when each week seems to bring a new record number of Americans filing for unemployment, Ward said he’s grateful to have a job to fall back on. Still, he worries for his family members who have autoimmune diseases.

“There’s this looming threat of a pathogen that you can’t see … it’s an uneasy feeling, but you know there’s not so much you can do about it,” he said. “I try not to let … any of the anxiety be overwhelming because we’ve got a ways to go.”