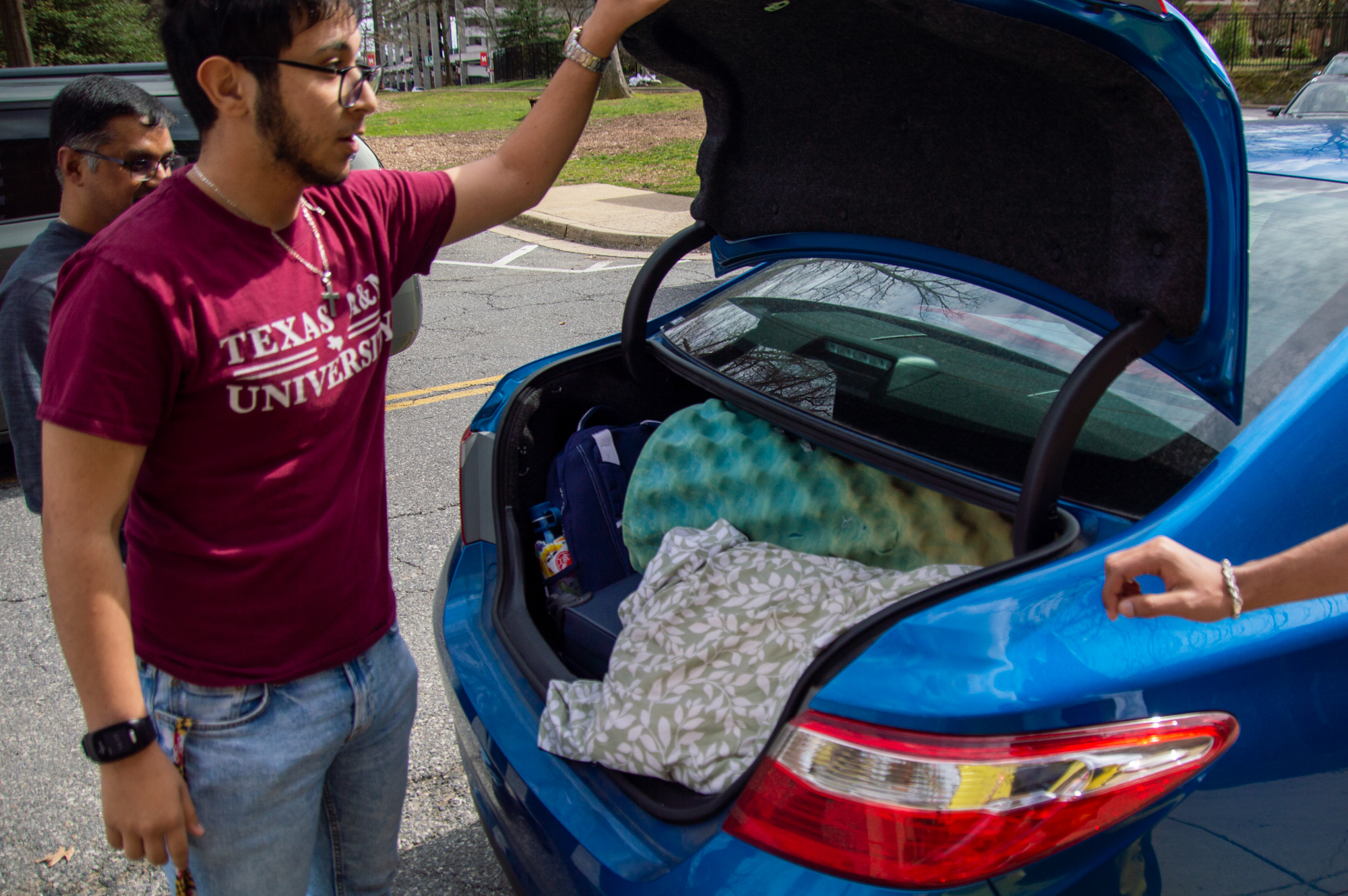 A student stands by his packed car outside Elkton Hall, preparing to return home on March 13, 2020. (Joe Ryan/The Diamondback)

Jessica Levenson was ready to fly back to College Park from her home in Florida to pack up her belongings from the University of Maryland’s Allegheny Hall. But after the school postponed move-out from dorms, South Campus Commons and Courtyards on Wednesday, the sophomore psychology major wasn’t sure how to proceed.

“I don’t even know when I’m ever going to get back up there,” she said.

Move-out plans for students in dorms and apartments have changed over the past week, as the coronavirus spreads in Maryland and throughout the United States. Students in on-campus housing were previously told they must schedule a move-out slot and empty their dorms by April 5, and an information delay for students in South Campus Commons and Courtyards left some things up in the air.

Then, days later, those students were told their move-out appointments were canceled and the process was delayed indefinitely.

For students like Levenson who are hundreds of miles from campus, or those who wish to quarantine away from vulnerable relatives at home, the changing policies were bewildering and stressful — leaving their timelines for returning home or retrieving their belongings up in the air.

Gabriela Grant, a senior Courtyards resident, said she was confused when she got the email that she had to move out.

Grant is a Maryland resident, but she was worried about heading home to her immunocompromised father, who lives with multiple chronic illnesses. She has also recently been in New York for a funeral, where she said she could’ve been exposed to someone who was infected, but not showing symptoms.

Jonah Anderson, a resident assistant in St. Mary’s Hall, said he doesn’t know when he’ll be back to retrieve his things. He lives in Washington, which has 2,585 reported cases of the coronavirus as of Wednesday and is more than 2,000 miles from College Park.

“For me to fly across the country to pack up my stuff and back would probably put my health in danger and other people’s, so I don’t want to do that,’” Anderson said.

Wednesday’s updated policy means students who have already left their dorms can’t be sure when they’ll be able to return to gather their belongings. The decision was made in an effort to prevent students from flooding back to campus — a scenario that could make it far easier for disease to spread.

“It is clear that the public health imperative of maximizing social distancing compels us to postpone all residence hall check-out activity,” the email from the Department of Resident Life said. And once “conditions in Maryland and across the country allow,” students will again be able to sign up for move-out appointments, it read.

Anderson, an Arabic studies and journalism major, said Resident Life has been “really flexible” in setting a date for his move-out. But some students said they didn’t understand the university’s logic.

Grant requested emergency housing through an online form, but also sent an email with her concerns about the move-out policy. She pointed to Maryland Gov. Larry Hogan’s executive order that evictions be suspended during the pandemic as evidence for her argument.

And Lucy Moberly, who lived in South Campus Commons, is choosing to stay with her boyfriend at his home in College Park, rather than make the trek back home to Michigan, where she’d be in the company of people who are more vulnerable to the coronavirus, she said.

She’s worried that her grandparents, who live only a few minutes from her home in Michigan, aren’t taking the crisis seriously. But in College Park, she’s exposed to only one other person.

“I don’t want to go home and then have them expect me to be in contact with them and stuff. Same with my friends,” she said. “Here, I’m just in contact with a lot less vulnerable and elderly people.”

Plus, the senior Arabic studies major said, her car is too small to haul all of her belongings — two years worth of stuff — the 500 miles back home.

So she’s shifted her essentials to the Old Town neighborhood and plans to keep some of her belongings in a friend’s basement in Frederick, she said. She’s not sure when she’ll be back in her hometown.

“I consider myself pretty lucky because I do have friends willing to help me out, and I have a car to move some of my things,” she said. “But I just really feel for the students who might not have a permanent home to go back to or might have an abusive household.”