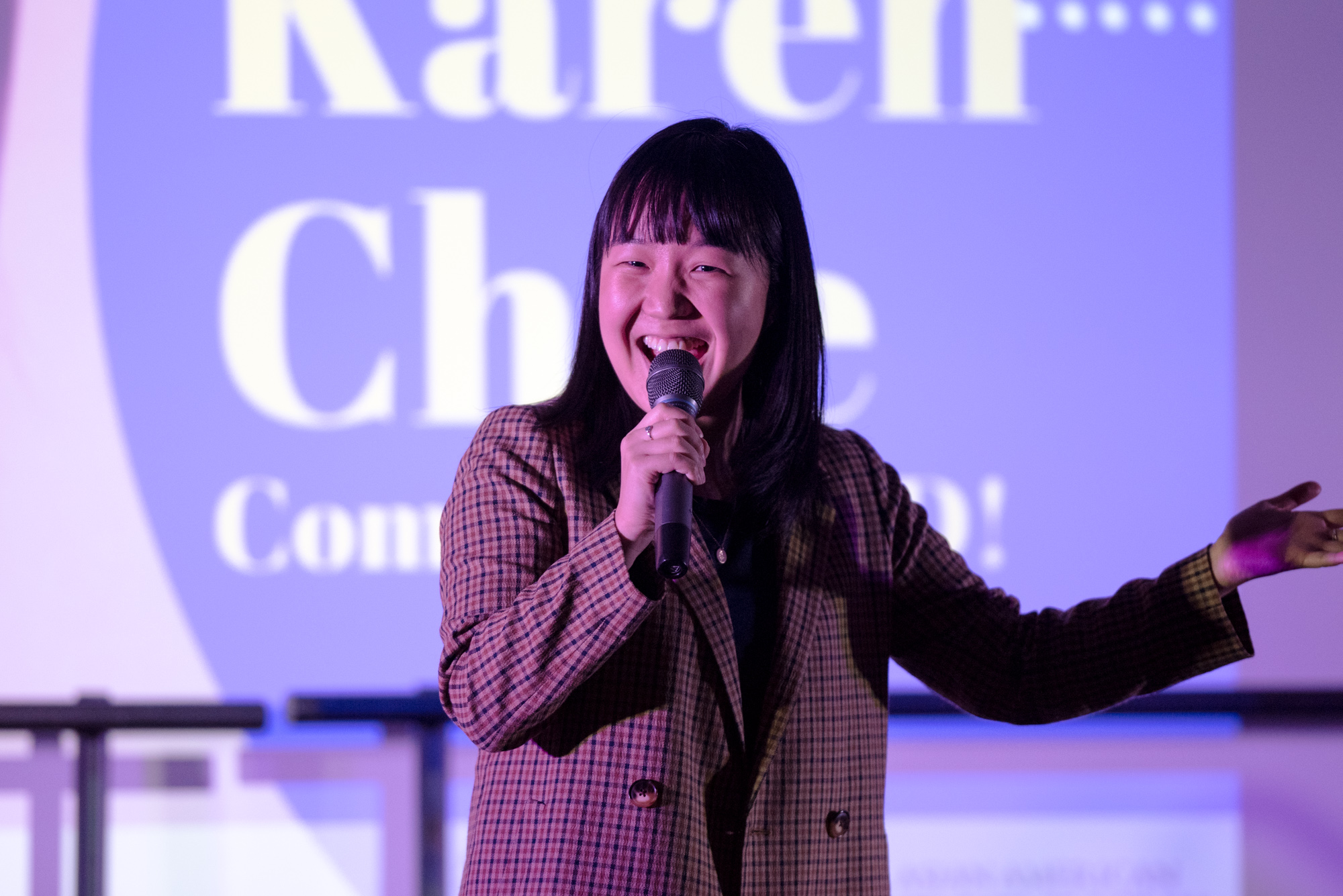 Karen Chee, a comedian and writer for Late Night with Seth Meyers, performs a comedy set at the University of Maryland on March 6, 2020. (Gabby Baniqued/The Diamondback)

Editor’s note: A previous version of this story repeatedly misquoted Karen Chee’s set and related interviews. Based on recordings of the event, this story has been significantly edited and updated to more accurately reflect her show, meet and greet and discussion panel.

By Pierce Panagakos
For The Diamondback

Karen Chee, a staff writer for Late Night with Seth Meyers, did a stand-up comedy show for University of Maryland students Friday night.

The Asian American Studies Program and the Multicultural Involvement and Community Advocacy office co-hosted the event. Terry Park, a lecturer in the program and Chee’s senior thesis adviser at Harvard University, spoke about the importance of the comedian’s trip to this university.

“I think it’ll be great for, not just the program, but for the Asian American UMD population, to see and hear from a successful, young Asian American comedy writer,” Park said.

During her set in the Stamp Student Union, Chee told jokes about microaggressions toward Asian American people, including one about how people thought she had coronavirus. Drawing laughter from the crowd, she later described a situation where strangers complimented her English-speaking abilities.

The event was funded by an anonymous donor to celebrate the 50th anniversary of the founding of the Asian American studies field. And before her show, Chee participated in a meet and greet with students and enthusiastically talked about this university’s AAST program, which was established 20 years ago.

“[The program] also reflects very well on the school, to be like funding that and believing that that’s a real thing that should exist,” she said.

While Chee said she hasn’t tailored her material differently for college students, she does like to try out new jokes at colleges.

“College students are much more honest with their feedback on jokes,” she said. “I think in New York, people are like ‘Hey I paid like 20 bucks to be here,’ so there’s like a ‘I hope you’re funny, I’m gonna try to laugh at stuff.’ But I think [with] the last few college stuff I’ve done, if a joke bombs, it bombs. And it’s really helpful to know and be like ‘Great, I will never say that again.’”

“I just thought it was interesting,” Khong said. “I didn’t really know who like Karen Chee was, but seems cool.”

After her show, Chee sat down for a panel discussion with Park and spoke more about her journey to where she is now and offered words of advice for Asian Americans who aspire to be in the entertainment industry. She talked about how she started writing freelance pieces for humor magazines and websites during her sophomore year, and later wrote her senior thesis about The Hanging on Union Square, a book by Asian American author H.T. Tsiang.

After college, Chee ultimately moved to New York and pursued stand-up comedy. She’s also had work published in The New Yorker and The New York Times, and wrote jokes for Sandra Oh when the actress hosted the 76th Golden Globe Awards in 2019.

Chee also described how, as an Asian American who grew up surrounded by literature and movies that depicted the perspectives of white people, she’s able to look at things from two cultural points of view. And seeing multiple perspectives allows Asian Americans to have “access to more,” she said.

“It’s been drilled into me since the age of four,” she said. “So I’m like, great, I know your perspective, but I also have mine. And you don’t have mine.”