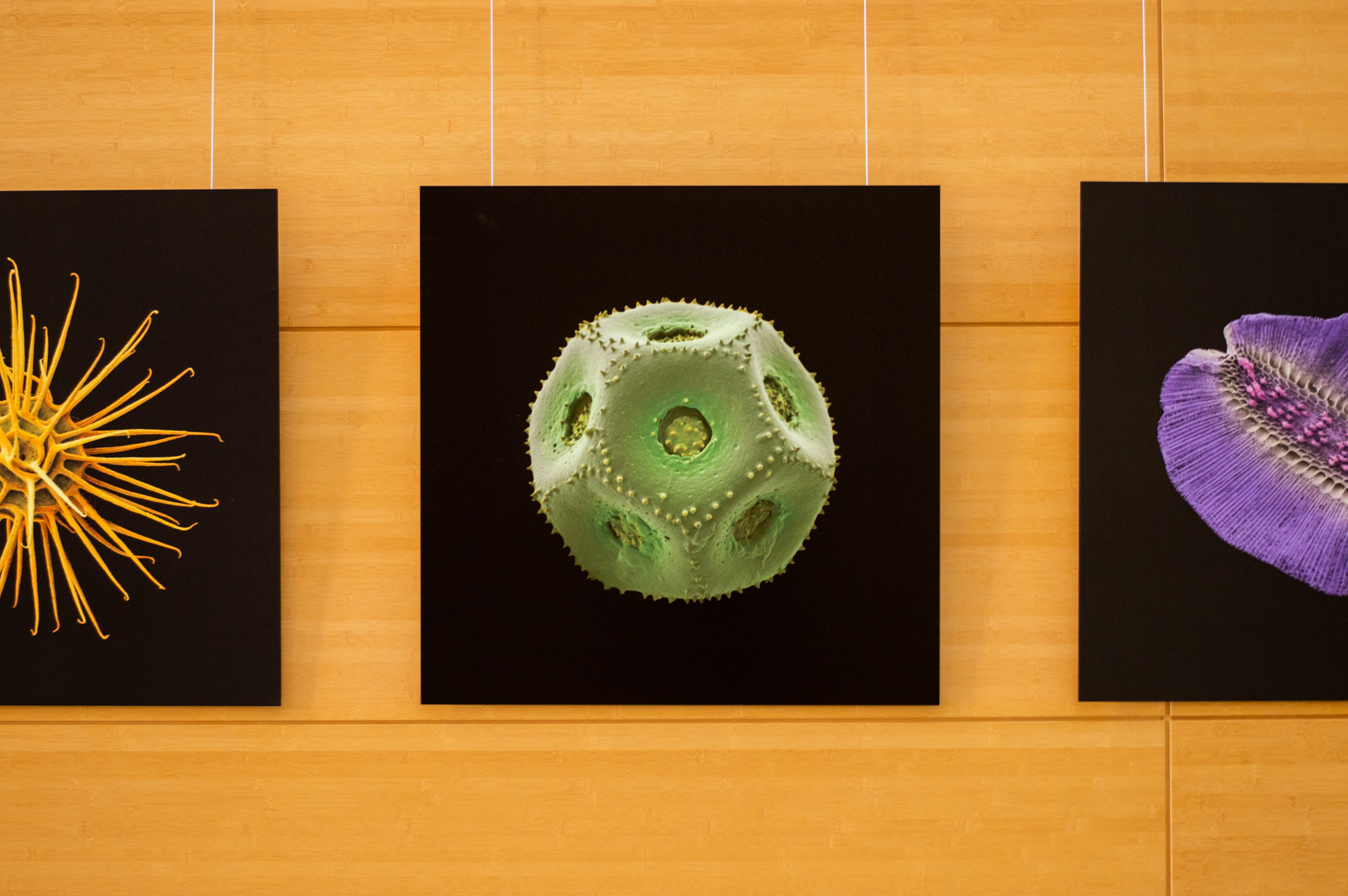 A collection of photos through a microscope by Rob Kesseler titled "World Within" on display in the Bioscience Research Building on March 3, 2020. (Joe Ryan/The Diamondback)

Science can sometimes seem incomprehensible. I would know. Even after three years of taking college-level science classes — organic chemistry, neurobiology, you name it — I’m still stumped by some of the scientific literature out there. I can only imagine how non-scientists must feel.

Science needs to be more accessible to the public, and art has the potential to accomplish that. By conveying scientific information in a form that’s easy to consume — from photography to drawing and painting — we can make science less intimidating and promote open discussion about important issues.

For instance, regular dwellers of the University of Maryland’s Bioscience Research Building may have noticed “Worlds Within,” an installation that displays artist Rob Kesseler’s micrographs of plant cells, pollen, seeds and other internal plant organs. Normally, the recurring patterns found in cells are difficult to view without a microscope. Through his art, however, Kesseler has made the natural world’s hidden geometry visible to anyone passing through the building. No need for lab equipment or elaborate jargon that requires a doctorate in biology to understand. Just one photo and you’re hooked.

What I found so wonderful about Holt’s exhibit was the blending of science and art in an effort to destigmatize mental illness, something neither discipline can effectively do on its own. Even though one in five U.S. adults struggles with mental illnesses each year, many people don’t consider them legitimate medical disorders. They’re often judged as a make-believe feeling in someone’s head rather than a matter rooted in science. If we can visualize the science behind mental illness, perhaps we will be better equipped to offer acceptance and empathy to people with these conditions.

The visual element of these exhibitions conveys a much stronger message to general audiences than most scientific articles. And if you can reach a broader audience, you can make a bigger change. Art affects not just what we think about scientific issues, but also how we think about them. Just as “Neuro Blooms” visualizes the reality of otherwise invisible mental illnesses, “Worlds Within” demonstrates nature’s microscopic beauty in an unconventional way. And although esoteric terms and complex formulas certainly have a time and place, making scientific information purposefully hard to understand would be a public disservice.

I appreciate this university’s effort to display science-related art. These exhibitions represent a step toward increasing accessibility, especially for people who normally feel overwhelmed by science. As an educational institution, the university has a duty to promote sharing of ideas among diverse groups of people. Generating a balanced dialogue between the scientific community and the public is vital for maintaining perspective on both ends.