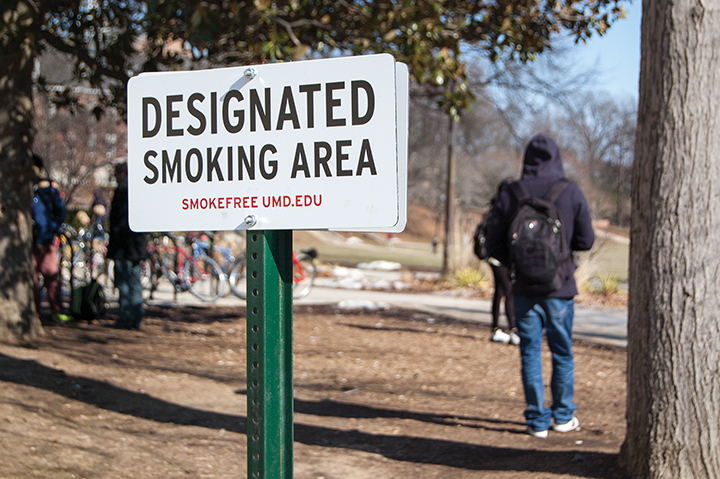 A proposed University of Maryland Senate policy would include vaping as part of the university's smoking policy. (File photo/The Diamondback)

I want to believe we’re moving toward a post-vape war society, where people have blown their steam enough to start focusing on rational vaping regulations. Hopefully, the last remnant of this more cloudy time is the federal ban on most flavors of popular types of e-cigarettes implemented earlier this month. While it remains to be seen how effectively it will curb youth usage, it at least avoids a unilateral ban on vaping and gives more sane institutions the chance to try better approaches.

The University of Maryland Senate is now working on its own policy to limit vaping on the campus, and it looks like an immensely progressive step forward in developing thoughtful and appropriately cautious vaping legislation.

The most commendable thing about the development of this campus policy is its enforcement model, which would be the same as the campus smoking policy. No one is tasked with persecuting vapers. Rather, the university community is empowered to remind one another where vaping is not permitted. This prevents a power relationship between vapers and the university and between vapers and their peers. Vapers aren’t pressured to circumvent rules to satisfy a nicotine addiction or challenge distant authority; as we know, prohibition and coercion policies often end up backfiring. Instead, it links healthier and more considerate vaping practices to being a decent person and fulfilling the social contract.

In addition, if no one has to be a cop, the conversation around vaping can be more open. We’re learning more about vaping’s dangers, and new research has to inform future policy. People have valid concerns about secondhand vapor inhalation and the growing cases of lung injury associated with it — and at the same time, a lot of misinformation is driving the greater war on vaping. Even the recent flavor ban is a dubious bit of policy. A similar ban on most flavored cigarettes in 2009 barely had any effect on the decreasing rate of youth cigarette use, and there has been much criticism of the politicization of developing vaping regulation.

The university’s approach helps set a precedent that vaping policy should be responsive to science, public health concerns and frustration across many different communities — but shouldn’t exclude vapers from the conversation. It creates space for vapers to be informed and responsive to new information, requiring them to consider the effects of vaping on other people without demonizing them for their usage.

Vape culture is growing and changing, and the most effective way to promote healthier practices is to work within that culture. National attention is on younger people picking up e-cigarettes as their first nicotine product, and the fatalities incurred by off-market vape usage. These are valid concerns. But while unilateral bans have never been a good way to stop drug use, changing norms can be.

Vaping is one of the most effective forms of smoking cessation, and its positive societal effects need as much understanding as its negative consequences. But the people who use vapes as intended are already seeking out healthy practices — and institutions shouldn’t persecute them when they’re facilitating the shift away from cigarettes. We’re in the midst of a positive phenomenon, not a national crisis, and this proposed regulation helps set a better tone going forward.