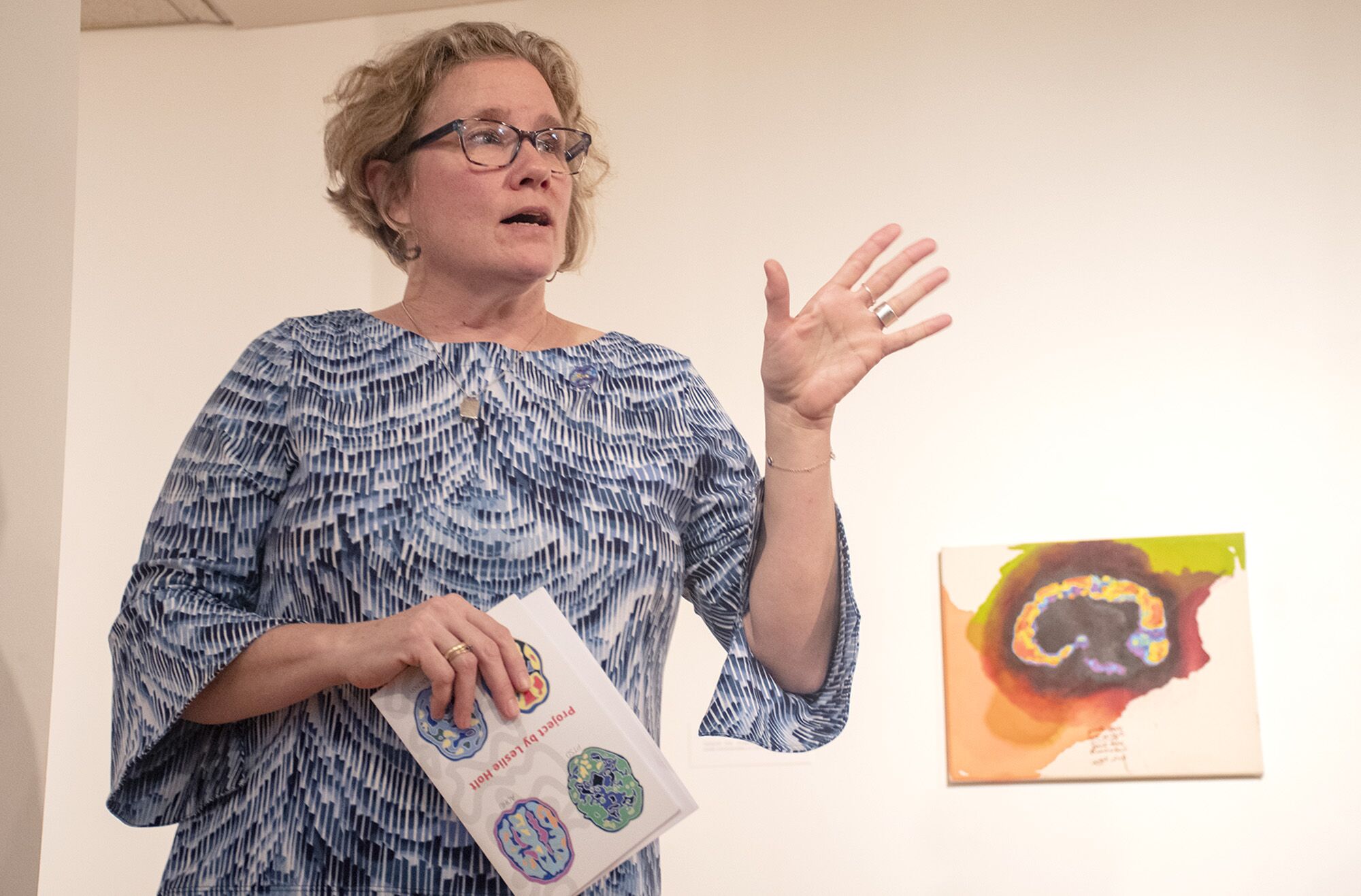 Brains were on display at Stamp Gallery Wednesday night for the opening reception of Leslie Holt’s “Neuro Blooms” exhibit. But, as Holt will remind you, her “Brain Stain” series is not science.

“Do not study them for your science classes!” she joked at the reception.

Holt’s exhibit is full of mixed media renditions of positron emission tomography scans related to different mental illnesses, including depression, addiction, schizophrenia, ADHD and OCD. PET scans detect energy emissions from a particular radioactive substance injected into the body. The scans can be used to spot signs of cancer, mental disorders and other diseases.

The PET scans used for Holt’s artwork are all research-based and obtained from sources such as NIMH and published findings from various university websites. Holt compared scans to those of healthy brains and then interpreted them through her own perspective. The scans were then transformed into distinctive pieces of art, using stitched embroidery thread and acrylic paint stains.

“They are not copies, some of them are kind of faithful … to the colors and the shapes, but they are really interpretations of these images,” Holt said.

Although each piece is unique and showcases a particular disorder along with a wide variety of shapes and forms, one thing they all have in common are vibrant colors. Holt’s art heavily features shades of neon yellow and bright hues of blue, pink, red and orange.

“They are based on the actual colors of the PET scans,” Holt said. Clinical PET scans feature bright colors to distinguish between healthy and unhealthy tissues, which allows doctors to detect abnormalities within the body.

[Read more: Review: National Theatre’s ‘The King’s Speech’ is a performance for everyone]

Specifically, Holt hopes her artwork will play “a role in destigmatizing” mental illnesses. In the description for the exhibit, it says that “the translation of digital imagery into the handmade is a metaphor for the integration of scientific data with more nuanced and subjective experience.” In particular, Holt’s interest is in combining scientific data with artistic interpretation to reflect on the various facets of mental illness.

Students, staff members and gallery employees gathered Wednesday night to appreciate the art and explore the exhibit to its fullest. “Neuro Blooms” will be on display in the Stamp Gallery until March 28.