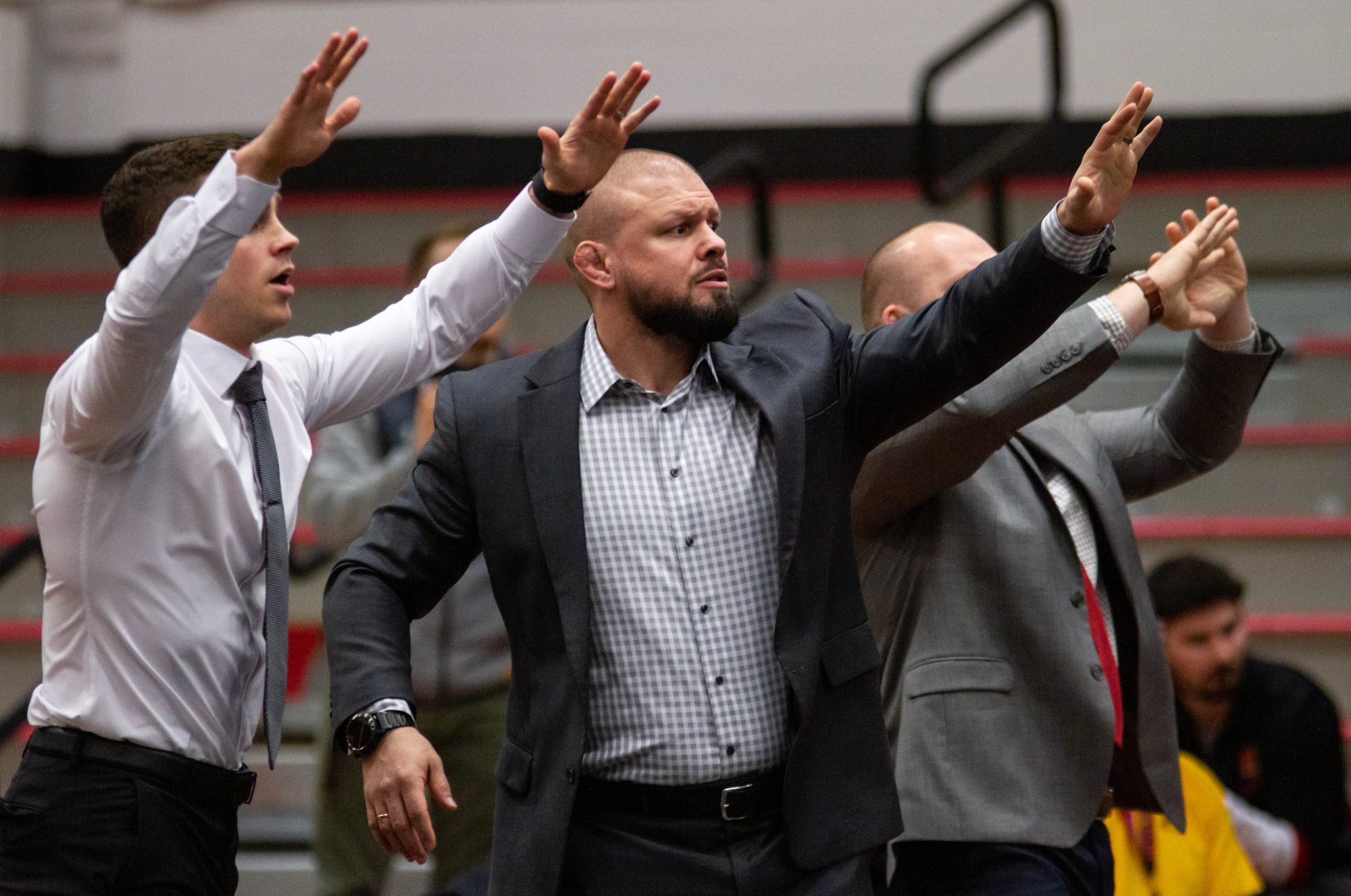 Maryland wrestling hadn’t folded under the pressure of facing a top-10 opponent earlier in the season, so there was reason to believe they could replicate that effort once more.

The Terps, winless in the Big Ten, hosted No. 10 Pittsburgh on Dec. 20, and if two bouts had flipped their way, the eventual 27-10 loss could’ve ended much differently.

So with road duals against No. 3 Ohio State and No. 2 Penn State on deck last Friday and Sunday — Maryland’s toughest opponents of the season — staying competitive wasn’t completely out of the question.

But unlike against the Panthers, the Terps were no match for the Buckeyes and the Nittany Lions, allowing 40-plus team points in both matches and losing a combined 83-6. It wasn’t the first time Maryland was blown out, but it provided a jolt to a program looking to erase its status as a Big Ten bottom-dweller.

“It was a wake-up call for our guys. We got exposed,” coach Alex Clemsen said. “This is the first time we really haven’t been in matches.”

Clemsen cited the Michigan State and Michigan matches, while also blowouts, as duals where the Terps were still competitive.

Last weekend was a far cry from that, but it was good for a program in the midst of a rebuild and looking to get out of the cellar of the conference.

Like Clemsen, the team realized the sour taste last weekend left in their mouth.

“If we want to compete at the highest level of competition like Ohio State and Penn State, we need to be able to up our game,” heavyweight Parker Robinson said.

As has been the case since the program joined the Big Ten, Maryland has struggled with consistency. But there were glimpses of progress this season, with 165-pounder Kyle Cochran having won six of his last eight bouts before last weekend, as well as early-season successes from 157-pounder Jahi Jones and 197-pounder Jaron Smith.

However, facing off against the best programs in the country can be challenging for a team still looking to develop an identity.

“I think we were overwhelmed with the fact that we were facing such big names,” 133-pounder King Sandoval said. “A lot of the matches we were wrestling, it felt like we were almost scared to do stuff.“

Clemsen, a coach who’s been nothing but “brutally honest” with his team throughout the season, wasn’t pleased with the Terps’ performance on the road. At this point in the season, with four matches left, this isn’t where he pictured this program.

He’s had high aspirations for Maryland since coming to College Park, and it’s taken a while for results to come to fruition.

“We need more time and we need some more talent to emerge,” Clemsen said. “We’re at a C+ right now. We need to finish with a strong B.”

The Terps have been lacking the technical success he’s looking for, having been unable to capitalize in certain positions where Maryland should land points. And individually, the team feels they haven’t maximized their potential thus far.

“This is definitely not where I want to be,” Sandoval said. “I feel like I could’ve progressed a lot more than I have so far…I’m not gonna blame that on anyone else.”

That’s set the team back from where Clemsen wanted it to be. While the dialogue with players has been constructive, there’s plenty that still needs to be done.