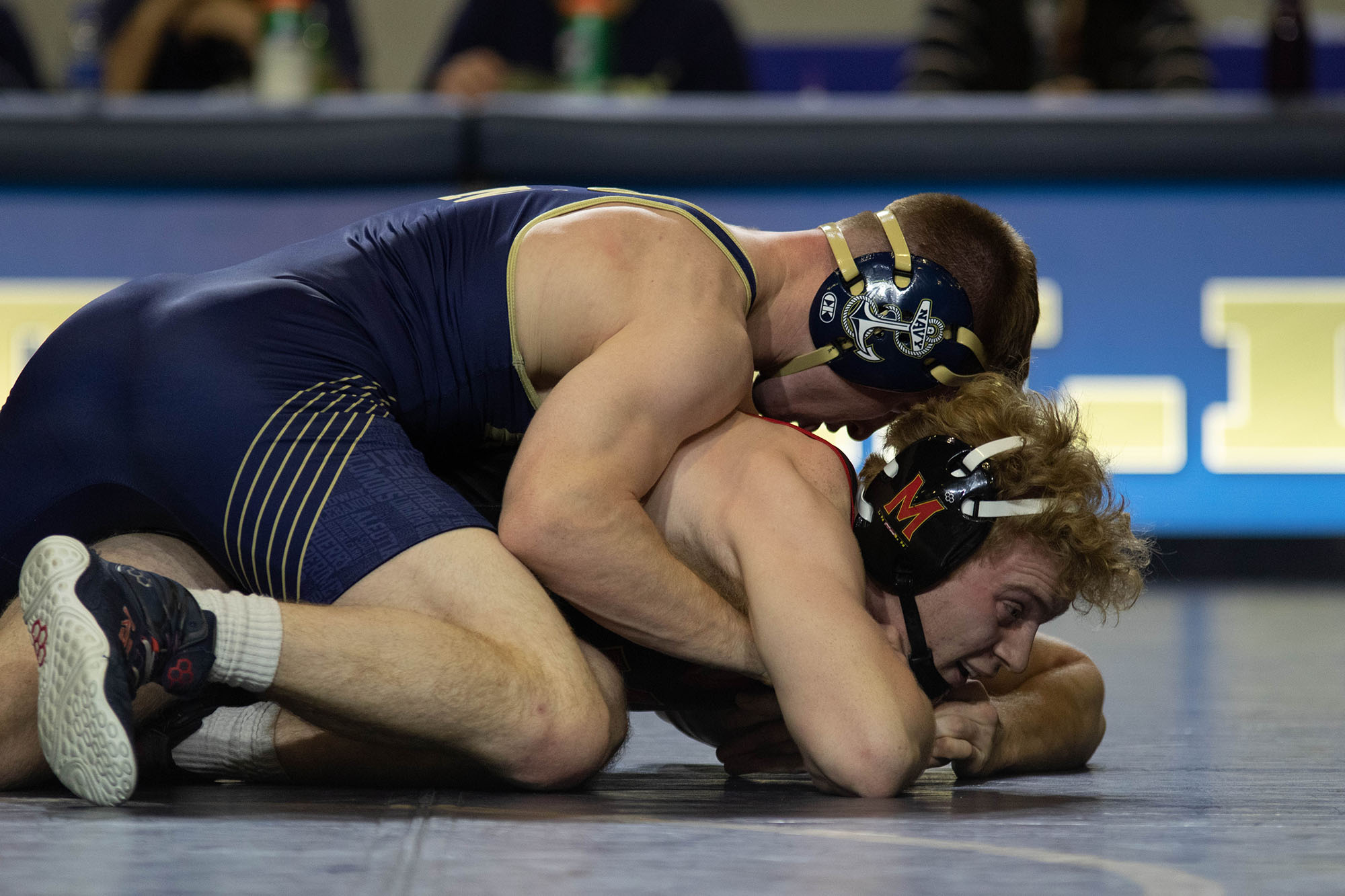 Lucas Cordio entered his 157-pound bout against No. 12 Will Lewan of Michigan, hoping for a big upset on Friday night.

Maryland wrestling already trailed 14-0 in the match at that point, and a win would’ve helped to close a big gap with the aim for big results from the heavyweights. Cordio, replacing normal starter Jahi Jones after he was suspected for a post-match altercation against Rider last Saturday in the Virginia Duals, prepared for his third-straight dual.

However, Lewan was a mismatch for Cordio, who was dominated from the start as Lewan recorded a 19-4 technical fall. From there, the Wolverines cruised to an 34-3 dual win in the Terps’ second Big Ten meet of the season.

As has been the case for much of this year, Maryland’s underweights struggled to start the match, beginning with Brandon Cray. The 125-pounder entered after his first dual win this season at the Virginia Duals.

He was one of two Terps who narrowly avoided a technical fall loss within the first four bouts of the dual, losing a 16-2 major decision to Jack Medley.

King Sandoval nearly pulled off a win in his 133-pound bout against Joey Silva. An escape with about a minute left in the third period closed the deficit to 3-2, but Sandoval couldn’t pull off a takedown, losing a 3-2 decision.

The second near-technical loss came against 141-pounder Hunter Baxter, who Cole Mattin nearly blanked. Baxter trailed 10-0 going into the third period, eventually losing a 15-2 major decision as Maryland went down 11-0 in the match.

There was a glimmer of hope as 149-pounder Michael Doetsch had No. 9 Kanen Storr in a 2-2 battle going into the third period of their match, but Storr would separate, winning a 5-3 decision.

Cordio’s technical fall was Maryland’s fifth-straight bout loss of the dual going into the intermission.

165-pounder Kyle Cochran has been Maryland’s most successful wrestler in recent weeks, going 4-0 in the Virginia Duals. But on Friday against Tyler Meisinger, who was 0-2 in duals coming into the meet, Meisinger was on the offensive from the start of the dual.

Cochran was forced to the comeback trail, down 10-2 after the first period. He held Meisinger to just two points the rest of the bout, but the eight-point deficit was too much in the closing seconds, losing a 12-9 decision as Maryland dropped its first six matchups in the dual.

The Terps avoided a shutout in No. 23 Philip Spadafora’s 174-pound bout with Max Maylor, who led 3-1 going into the third period. Spadafora, who started the period in the down position, got an escape to close the deficit to 3-2.

In the neutral position, Spadafora was on the offensive and threw Maylor over his back for an easy takedown, taking a 5-3 decision with riding time.

While the Terps were down too much by that point, 22-3, there were still three bouts left, starting with 184-pounder Kyle Jasenski. He had a tough task against No. 17 Jelani Embree, who outscored him 4-1 in the third period for a comfortable 8-3 decision victory.

Jaron Smith had a good opportunity against 197-pounder Jackson Striggow, and he had over two minutes of riding time and a 2-0 lead through the first period, but Striggow landed two takedowns, coming away with a 4-2 decision.

Heavyweight Parker Robinson ended the dual for Maryland, but against No. 2 Mason Harris he was no match, getting pinned in 3:40. Now, the Terps’ eyes are set on with a battle against Michigan State on Sunday.