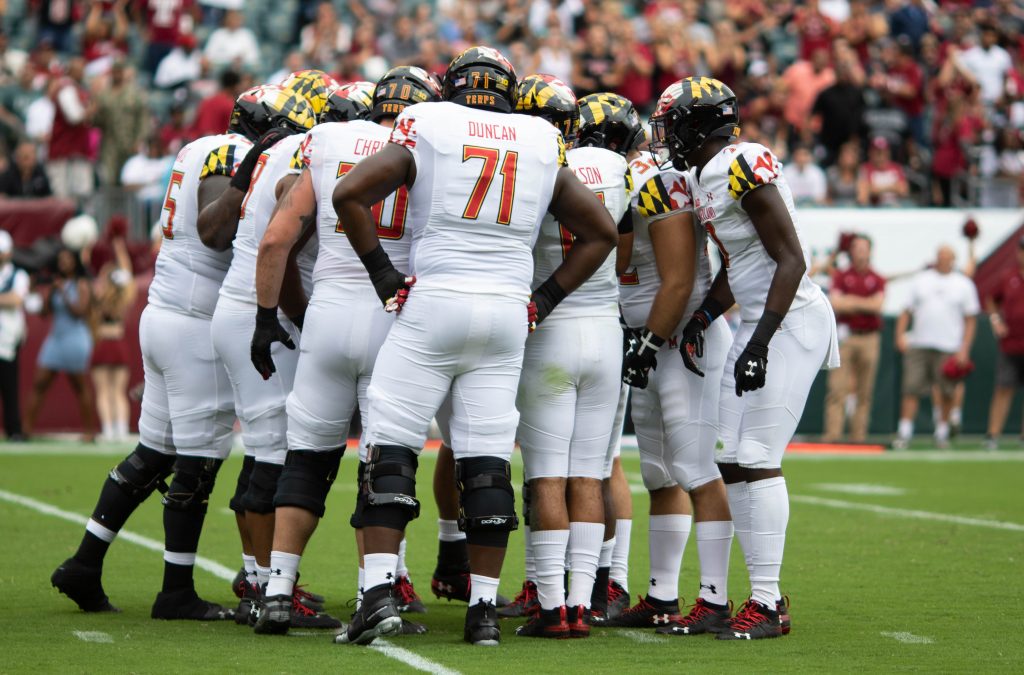 Before taking the field, left tackle Jaelyn Duncan takes a moment to gather himself. He breathes in and out, his chest rising and falling as he steadies whatever nerves still linger ahead of Maryland football’s first possession.

But now, with 11 games under his belt, those feelings are easier to shake. While play once moved quickly and his main goal was just to hang on tight, the 6-foot-6 lineman feels more in control. What once was nerve-wracking — attempting to fill in where two-year starter Derwin Gray had held court — has started to feel routine.

And as the game slows down around him, Duncan’s performances have improved. Though Maryland’s opponents have only become more imposing as the season’s progressed, Duncan is no longer playing like a raw redshirt freshman. The former four-star prospect has displayed progression, the type of development from a young player coach Mike Locksley is banking on as he attempts to rebuild the Terps.

“About Week 4, it started to become more real for me,” Duncan said. “I wouldn’t say it got easier, but I started to understand the football more, the speed of the game, my intelligence picked up, my IQ.”

It was a rocky start for Duncan. In the 323-pound left tackle’s first five games — between Syracuse and Purdue, excluding a season-opening win against Howard — Duncan allowed 26 quarterback pressures, according to Pro Football Focus. And in his most recent five games, despite facing three ranked opponents, Duncan’s allowed just 13 pressures.

Between Weeks 2 and 7, Duncan allowed pressure on 12.9 percent of his snaps. That number has dropped to 9.3 percent since then.

It’s been that steady improvement that’s impressed Locksley most. The redshirt freshman often visits his head coach, discussing what he can improve on while commending the good things Locksley’s seen. Duncan noted that Locksley still expects a lot more out of him — he’s a young starter on a rebuilding team, and he could be a mainstay along the offensive line.

“I’ve seen him improve tenfold in terms of from day one till where he is today,” Locksley said. “He came in Sunday to see me. It was like one of those ‘aha’ moments where you kind of say, ‘Hey, you know Coach, I get it.’”

For Locksley, who is attempting to turn around a program that’s struggled to adapt to the Big Ten, growth will be a crucial aspect. The kind of blue-chip recruits he secured at Alabama may not immediately be interested in a team Locksley deemed was still in “year zero.”

So if development is the way forward, what the Owings Mills native has done this season is encouraging. As a left tackle, Duncan protects his quarterback’s blind side. He also needs to set the edge on any rushing plays to his side.

“That position is like the big dog position in football,” tight end Chigoziem Okonkwo said. “He’s a young guy but he’s been approaching it like an older guy. Everything he does, he comes in and works hard. And he’s a leader on the O-line, just goes out there every day and every game. He doesn’t say much, he just goes out there and lets his play do the talking.”

In a perfect world for the Terps, injuries wouldn’t have left the offensive line as thin as it has been; Spencer Anderson, Austin Fontaine and Duncan — all redshirt freshmen — have seen playing time this year.

Duncan has seen the most, starting 10 straight games and improving his protection with each one.

“I was nervous at first, because I’m a young guy, you know, and that’s a big position to fill,” Duncan said. “Feel a lot more comfortable now.”