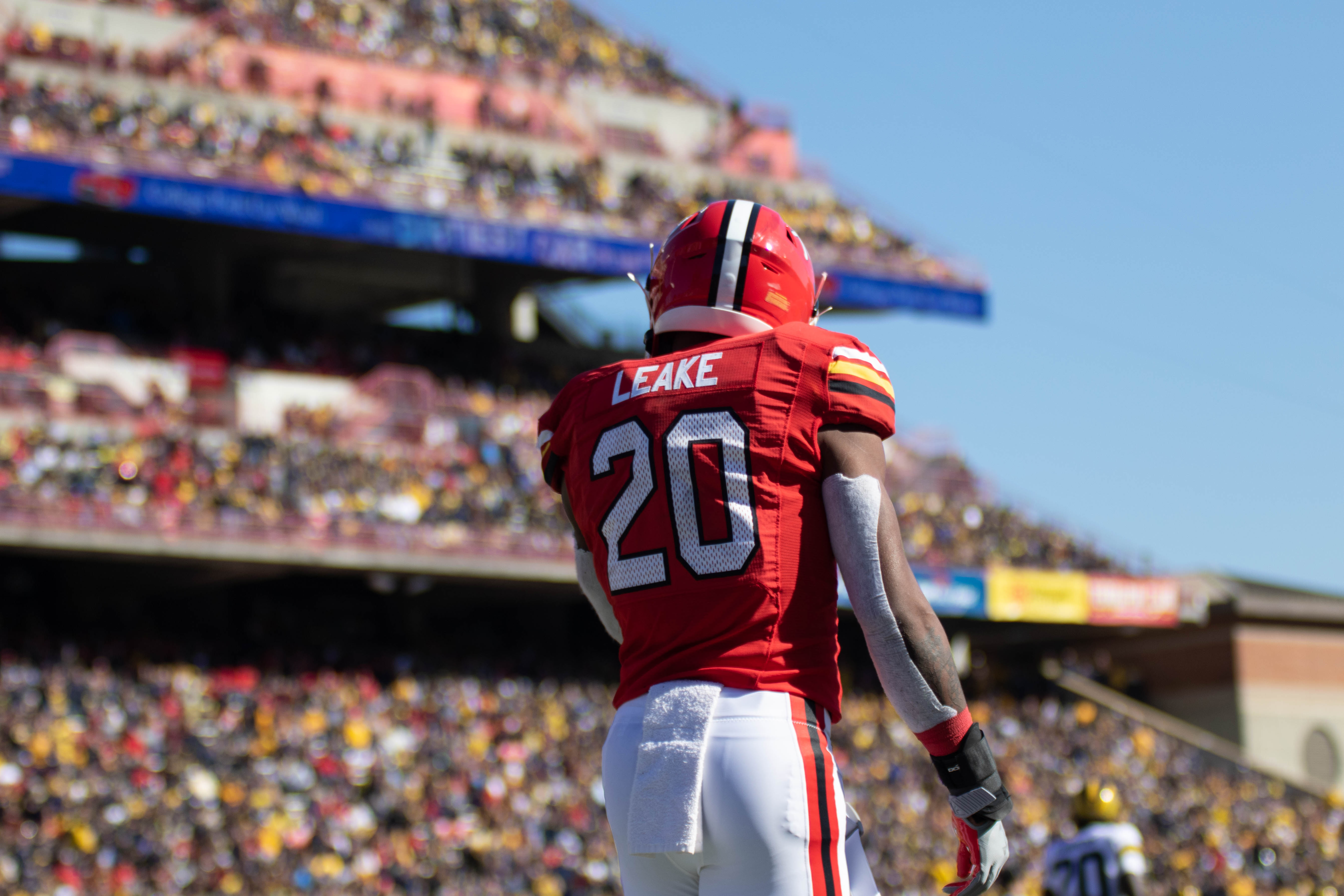 Nebraska’s players had already sprinted in celebration toward their sideline, skipping and hollering with the ball in their possession. Most of Maryland football’s offense ambled off the field, too, late in a game already well out of reach.

But Javon Leake remained. He sat near midfield, appearing too stunned to move until Josh Jackson reached down to pull his running back to his feet. Then Leake jogged to the sideline, flailing his arms in frustration, the same arms that couldn’t keep a tight grasp on the ball during a rainy outing at Maryland Stadium.

Before facing the Cornhuskers, Leake had lost three fumbles over the course of his Terps career. The junior saw the ball hit the turf three times Saturday, though, leaving him with a feeling of guilt over the giveaways that played a role in turning Maryland’s home finale into a blowout loss. And as he made his way to the bench following his third fumble, those feelings poured out.

“I’ve never experienced that type of game,” Leake said. “That was just kind of me being hard on myself, knowing I’m way better than that, and I’m just letting my teammates down by just all the turnovers.”

Leake has been one of the few bright spots on a team stuck in a six-game losing rut. He leads the squad with 716 rushing yards and eight touchdowns. The Greensboro, North Carolina, native averages 7.78 yards per carry, the second most in the country among Power 5 tailbacks with over 60 touches. He’s the only Maryland running back to feature in all 11 games — a once-robust positional group that’s been thinned through injury and off-field issues.

He knows his performance Saturday isn’t indicative of his season-long success. And that’s what made his struggles so aggravating for himself and his coach.

“He was really disappointed by putting the ball on the ground,” coach Mike Locksley said. “The type of season that Javon has had, he has been one of the guys that I’ve seen really mature and become the type of player and the person that we need our players to be. So it’s disappointing when a guy like that doesn’t play to his ability.”

On Leake’s first carry, he broke through the first level of defenders into Nebraska’s secondary, a trademark big play from a home-run hitting back. But defensive back Dicaprio Bootle got his helmet on the ball, popping it out of Leake’s grasp and into the arms of another Cornhuskers defender. The first miscue set up a touchdown and an early deficit.

Then, on a pooch kick late in the first quarter, Leake attempted to scoop the ball on the first bounce.

“Took a weird bounce,” Leake said, thinking back on how the ball tipped off his fingers and Nebraska recovered to set up a field goal. “It was raining and stuff like that, so it was real slippery.”

And later, Leake seemed perplexed when he couldn’t hang onto the ball early in the fourth quarter, another strong tackle jarring it loose.

“There are times when players try to make plays, they become a little unconscious in terms of the ball security part and more conscious of trying to make plays,” Locksley said. “I know that’s the type of player Javon is.”

After watching tape of the mistakes, Leake said he needs to do a better job of wrapping up the ball with two hands. And while he was upset, he credits his teammates for helping to prop him up.

For much of this season, Maryland’s scoring has flowed through Leake. His kickoff return touchdown against Rutgers to open the second half continued an onslaught, and his 97-yard return against Michigan gave the Terps their lone points.

And in Saturday’s loss to Nebraska, Leake rebounded from his fumbles and broke a 58-yard touchdown run in the fourth quarter to ensure his team wouldn’t be shut out on Senior Day.

“No matter how many times I have turnovers, I’mma keep trying,” Leake said. “I wanted the seniors to go out with at least a good drive.”

So while Leake’s performance against the Cornhuskers was the nadir of his Maryland career, the 6-foot, 206-pound running back has been the high point of the Terps’ campaign. When they travel to face Michigan State this weekend, it’ll be Leake once more receiving handoffs, and it’ll be Leake who in all likelihood provides Maryland with an offensive spark.

Because it’s been Leake who’s done that all year.

“I’m not known for fumbling, but a game like this, a crazy game where I have three, you just realize that you’ve got to tighten up a little bit on the fundamentals,” Leake said. “That’s what I’m going to do and be better Saturday.”