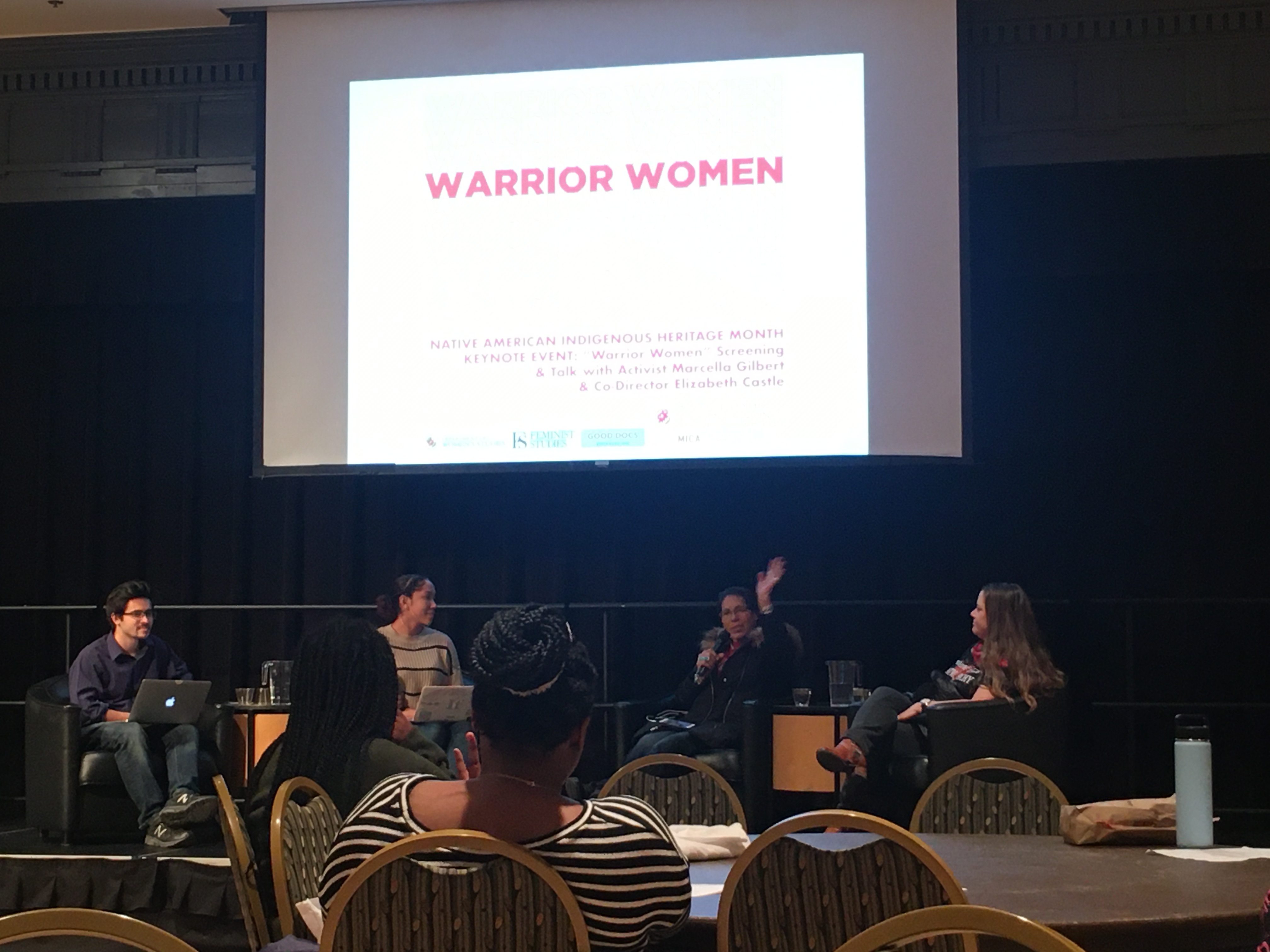 Elizabeth Castle and Marcella Gilbert talk to students following the screening of Warrior Women during the keynote event Nov. 21, 2019, for the University of Maryland's National Native American Heritage Month. (Courtney Cohn/ For The Diamondback)

A screening of Warrior Women and a discussion with co-director Elizabeth Castle and American Indian activist Marcella Gilbert Thursday marked the keynote event for National Native American Heritage Month at the University of Maryland.

Warrior Women focuses on Madonna Thunder Hawk, a Native American civil rights activist, and her relatives, telling the story of Native Americans who were repeatedly oppressed by the government and the white communities surrounding them. In addition to focusing on the strength of the American Indian Movement as a whole, the film spotlights the women who were the backbone of the movement.

“There’s a whole part of humanity and the history of humanity where women were not able to participate,” Gilbert said. “Why not give humanity a chance by including women? We have something to contribute, and that is based on life.”

Ashwini Tambe, a professor in the women’s studies department, said she believes the film’s portrayal of women fighting for change in their indigenous communities and passionately leading these movements is valuable for students to see.

“It’s also the case that many women have worked behind the scenes, tirelessly making a lot of sacrifices,” Tambe said. “They are the reason that we have had such thriving social movements in our country.”

The project began when Castle wrote her book, Women Were the Backbone and Men Were the Jawbone: Native American Activism During the Red Power Movement. She said she was so moved by interviews with the indigenous women that she wanted to make it into a film to do the story justice.

“I could feel my brain being rearranged,” Castle said. “I was thinking about things differently, and I just knew that other people had to be able to hear the story, and see it, and it needed to be something more than you just read in a book.”

Castle and Gilbert said both students at this university and people across the country should watch Warrior Women to learn about the history they were never taught.

“There is just a huge untold story out there that we need to know, and so [there’s] this idea that … you cannot move forward if you don’t know who you were,” Castle said.

Jazmine Diggs, a sophomore community health major who is involved in the American Indian Student Union at this university, said students should learn about the history so they can support the Native American student population on the campus — which was built on the ancestral lands of the Piscataway tribe, the native people in the area.

As of fall 2019, only 30 undergraduate students enrolled in this university identify as American Indian or Alaska Native, according to the Office of Institutional Research, Planning and Assessment.

“It’s just as important to know about tribal history and the land that you sit on as much as any other ethnic group that’s on campus,” Diggs said. “And it’s very relevant here.”