With the postseason out of reach, Maryland volleyball hopes to end season on a high note 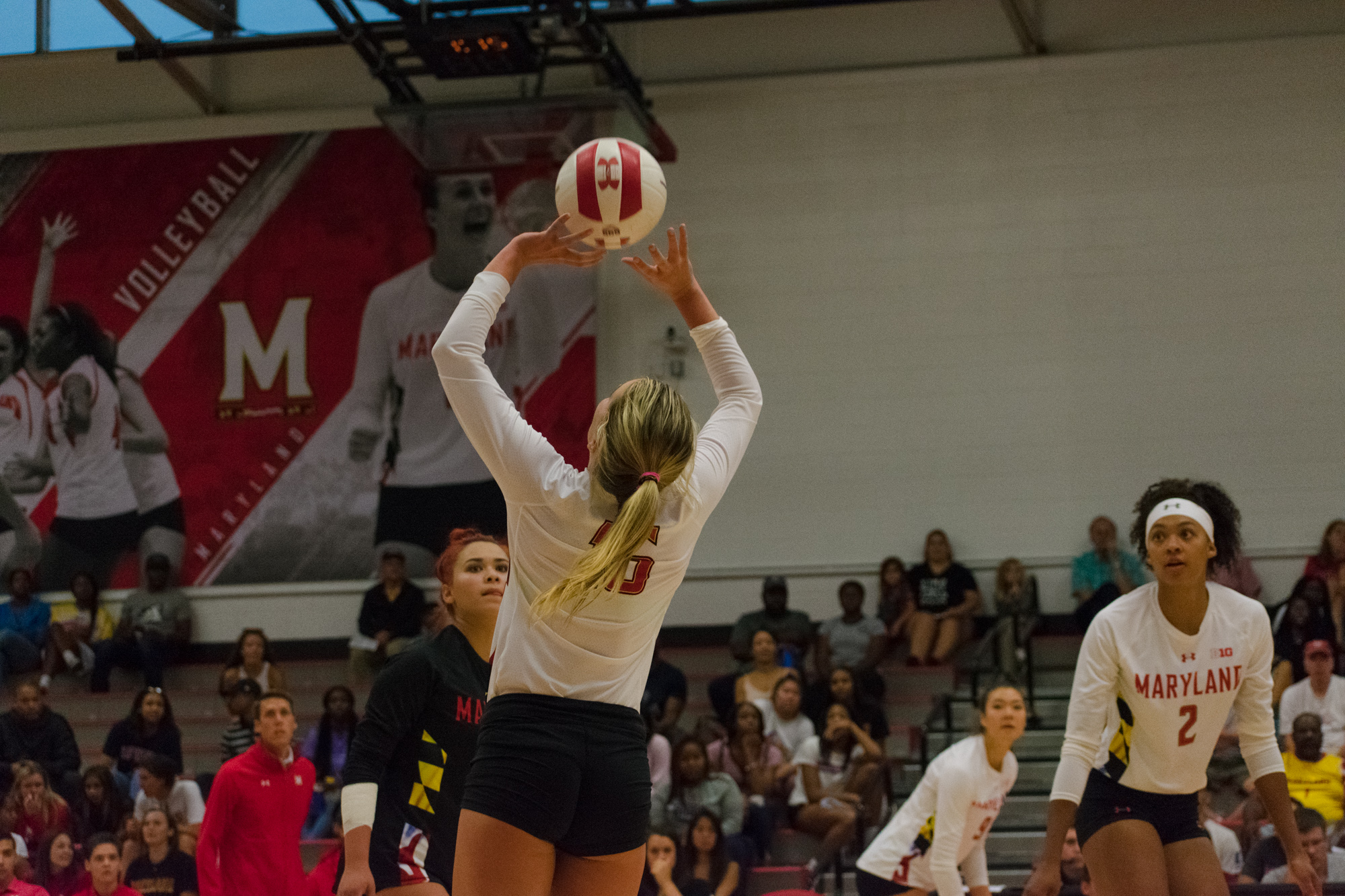 With four matches remaining in 2018, Maryland volleyball had three top-10 teams left to play, and the Terps knew they needed to steal at least one win to have a chance at the NCAA tournament. They had no such luck, though, falling short as one of the first four teams out.

But with just four matches left in the 2019 season, Maryland’s postseason aspirations have already been dashed.

Still, neither players nor coaches have sensed anyone on the team checking out mentally. As the Terps prepare to honor their departing seniors this weekend, they’re focused on playing hard to grab a signature victory to put a bow on the year — and their seniors’ collegiate careers.

“Our ultimate goal was to make the tournament, and that’s not going to happen this year, but we’re trying to build a program,” coach Adam Hughes said. “We hope that by this time next year, we have a match that we need to win to get into the tournament.”

Maryland is set to lose three seniors at the end of this season: setters Taylor Smith and Samantha Snyder and defensive specialist Nell Drummey. They will be honored before the matchup against Northwestern on Sunday.

While none of the three rank in the top six in sets played this season for the Terps, the team is grateful for the seniors’ contributions both on and off the court over their four years, as well as the way they’ve set up the program for future success.

The Terps’ quest to a positive end for 2019 will begin with No. 25 Illinois on Friday night. Maryland went 0-6 in sets against the Illini last year when they were ranked in the top 10.

From there, Hughes’ squad will play its first and only Sunday match of the season at home against the Wildcats. Hughes acknowledged that, while different from their normal schedule, the break on Saturday could benefit his team.

“It is a little bit weird having that day in between,” Hughes said. “It’s nice, though, because it gives you a little bit of turnaround to be able to change mentalities and change styles of play.”

[Read more: Maryland volleyball’s serve and pass woes doomed it in a straight-set loss against Purdue]

Maryland will hit the road for its last two matches of the season on Nov. 29 and 30 at Nebraska and Iowa. And after another full week in the gym, the second-year coach has seen his team working toward their goals, even though not much is at stake for the team as a whole.

“There have been a number of people who have done really well in practice,” Hughes said. “They’re still really engaged, and really focused.”

Middle blocker Katie Myers was once a part of the current senior class, but she has since reclassified as a redshirt sophomore after sitting out the better part of two seasons with injury. Regardless, Myers appreciates how her senior teammates have been there for her.

“The seniors have always been really good at communicating,” Myers said. “Specifically, I stand next to Taylor when I’m on the bench and she’s been great at telling me what she sees.”

While Myers and the seniors weren’t able to accomplish everything they planned this season, they hope to at least finish out their campaign on a high note.

“Obviously, our expectations from the beginning of the year are not going to be met,” Myers said. “We’re trying to build on the end of this year, so we can carry some momentum into next season.”