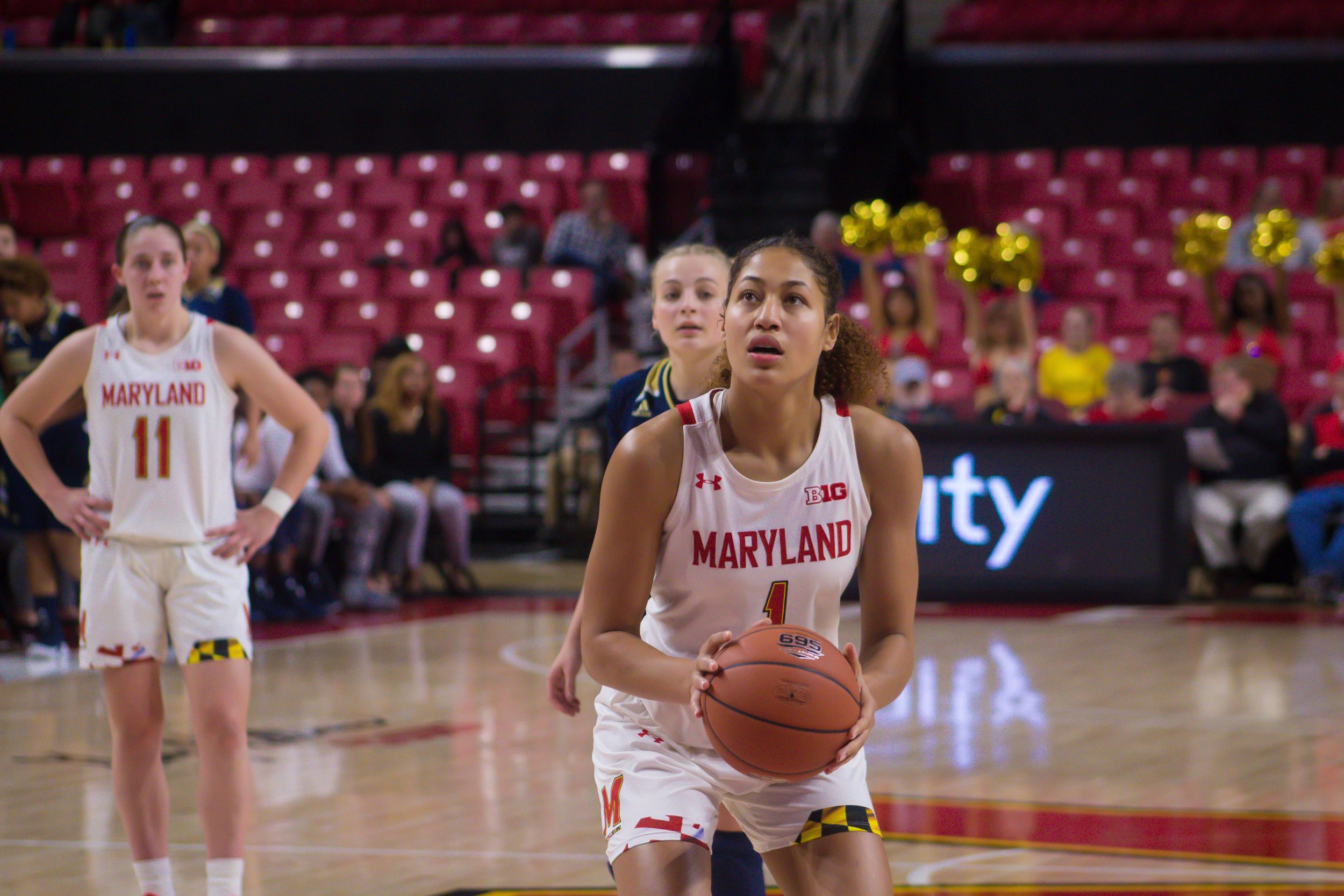 Now a sophomore, Austin is finding her teammates with regularity, setting a new career high with four assists in each of her past two outings.

Her improved playmaking was a major reason the Terps dominated their past two opponents by a combined 78-point margin, stringing together back-to-back strong offensive performances for the first time this season.

Austin has featured for a season-high 31 minutes in each of the past two games, too, sparking a previously stagnant Maryland offense and showcasing a new commitment to running the offense through the forward in the post.

“I think our main focus is working inside-out. It showed in the first quarter,” Austin said after beating George Washington on Wednesday. “Just being able to rotate the ball, too. I think that’s just been a big emphasis and we’ve been executing [well] enough to keep going back inside.”

Inconsistency was the biggest point of emphasis for Austin coming into her sophomore campaign. While her offense looked more polished in the preseason, her aggressiveness and focus has varied from quarter to quarter.

Coming off the bench in this season’s first three games, Austin had just one assist total and played erratically before scoring 13 points on 6-for-6 shooting in a fourth-quarter comeback against James Madison.

After her offensive explosion, Austin entered the starting lineup and became more of a focal point in Maryland’s offense. Coach Brenda Frese said that, although her 6-foot-5 forward deals with tendonitis often and wasn’t completely healthy to start the year, she had one of her best practices prior to the game against the Colonials and is beginning to put the pieces together on both ends.

“She’s starting to get a lot more comfortable as she’s securing these double and triple-teams inside and we’re trying to do a much better job of playing inside-out,” Frese said. “So I think you’re starting to be able to see just that trust factor.”

[Read more: With a new starting lineup, Maryland women’s basketball broke out of its offensive mire]

Austin’s patience and decisiveness when posting-up has been the most apparent change in her game in the last week. She typically used to take multiple dribbles in an attempt to bully her defender and maneuver closer to the basket, but this often allowed another defender to double-team her and strip the ball loose or alter her shots.

Now, when she gets an entry pass, it looks much different. She takes her time, assesses how the defense is going to play her and either takes advantage of her size for an easy move to the rim or quickly finds the open shooter, never taking more than a couple dribbles.

“You see she’s an elite-level passer, so it just makes us much better as a team when she can find those opposite kicks and make easy plays for us,” Frese said.

Often on the floor with guards Blair Watson and Taylor Mikesell, both elite shooters, Austin is helping her team get more quality looks both in the paint and behind the arc. In its past two games, Maryland has shot over 50 percent from the field and hit double-digit 3-pointers, both of which can be largely attributed to Austin’s maturation.

Sunday’s game against Quinnipiac (1-2) looks to be another opportunity for the traditionally defensive-oriented Austin to continue developing a well-rounded offensive skillset.

“Her ceiling is huge. She stays the course and just continues to stay consistent,” Frese said. “It’s exciting to think what lies ahead for her.”