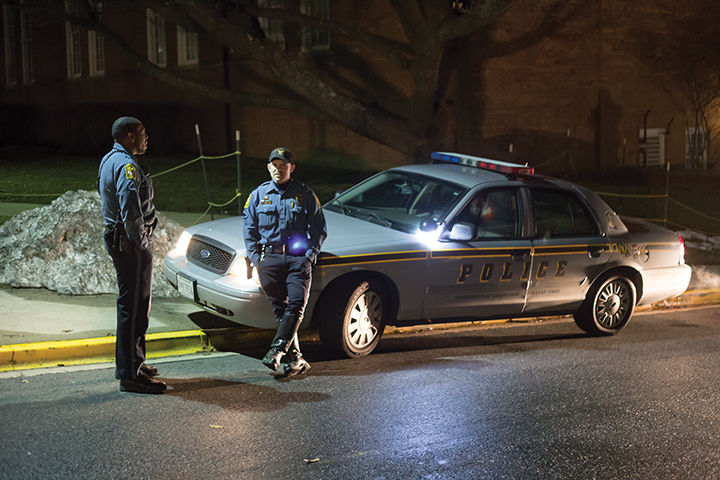 Recently, Montgomery County Executive Marc Elrich clashed with Gov. Larry Hogan over a “thin blue line” flag carving gifted to a county police station. In a statement, Elrich said the carving would not be displayed publicly within the police department because of its divisiveness.

This prompted strong blowback from Hogan and members of the public. It also inspired my fellow columnist, Kevin Hu, to write about how this controversy over Blue Lives Matter is overblown and dismissive of the positive contributions of law enforcement.

Unlike my colleague, I believe that the toxicity between the police and the policed is further stoked by movements such as Blue Lives Matter.

In his column, Hu claims, “the inclusion of the blue line [in the flag] has been labeled by some as a slight against Black Lives Matter by apparently conveying the opposing message, Blue Lives Matter.” It is objectively true that the Blue Lives Matter movement came about in response to increased criticism of law enforcement after high-profile police killings, such as the shooting of Michael Brown in Ferguson, Missouri. This criticism — focused on deadly, racially-biased policing — became encompassed in the Black Lives Matter movement.

As more and more police shootings occurred with fewer repercussions, many wondered whether police are actually accountable to those they swear to protect. This criticism sparked fears of a “war on cops,” and, coupled with a few incidents of targeted shootings of police, inspired the adoption of Blue Lives Matter as an opposing rallying cry. Blue Lives Matter is not only a response to a movement for police accountability — it is also a movement that views police accountability to the public and police safety as a zero-sum game. This in itself is toxic for police-community relations.

Hu also notes, “It’s ludicrous that a mundane artistic choice here is being labeled with a politically charged motive.” Again, things are much more complicated than that. First, the American flag is a national symbol. Any modification of it is inherently political. Second, Blue Lives Matter is also political because it has an associated legislative end — making the targeting of first responders a hate crime.

I am obviously opposed to violence against first responders, but it’s important to note that there are already laws that impose harsher charges and sentences on those who attack police.

Classifying an occupation as an oppressed group is what’s really ludicrous here, especially because this might actually increase enmity and violence — and decrease cooperation and stability — between police and the communities they police. Instead of addressing a deadly epidemic of police brutality that, at the moment, often allows police to act with impunity, Blue Lives Matter seeks to further divide police and the policed, feeding into the deadly narrative that cops are at war with the public and must protect themselves accordingly. That seems pretty divisive to me.

Finally, in his case for appreciation for police, Hu mentions the very real dangers they face on the job. He accurately points out that, “[p]olice officers can be injured in the most unsuspecting situations, such as in what investigators called a routine traffic stop. The constant, subliminal fear of death is a real concern.”

Just last month, a 24-year-old black man was left partially paralyzed after police arrested him during a traffic stop in Prince George’s County. In 2016, Terence Crutcher, an unarmed black man, was fatally shot as he stood outside his car: The officer who shot him was acquitted. Philando Castile was shot during a traffic stop in 2016: The officer who killed him was acquitted. Michael Brown was killed in 2014. The officer who killed him was not indicted, and the U.S. Justice Department did not pursue federal civil rights charges.

All of that shows just how insulated police are from accountability. The constant, subliminal fear of death is a real concern for the policed as well, especially when they are members of minority groups.

Ultimately, equating the issue with Blue Lives Matter to a flag design choice is harmful and reductive, and it ignores the political power this movement wields. Blue Lives Matter pushes the narrative that not only are police a separate class from civilians, but also that what is good for police is in direct opposition to the public will. This movement seeks to stifle legitimate criticism and punishment of police,  and foster enmity between police and the communities they are sworn to protect. As for “over-criticizing” police, perhaps if officers faced real consequences like the rest of us, the public would feel less obligated to take matters into their own hands.