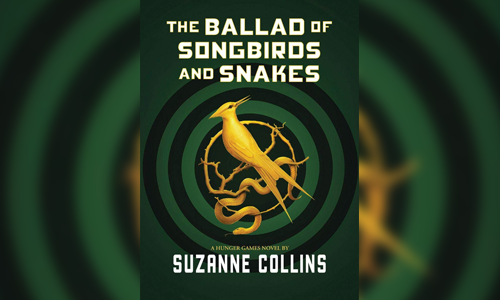 The cover of 'The Ballad of Songbirds and Snakes' the latest addition to 'The Hunger Games' trilogy by Suzanne Collins. (Photo via Amazon)

Remember those middle school days of being swept away into the world of Panem as Katniss Everdeen and her friends fought against a cruel establishment? Remember the bittersweet thrill of watching her work with the secret District 13 to overthrow President Snow?

I certainly do. And as much as I would love to escape into that world all over again, I fear the new addition to the series — a prequel whose title and cover were announced last month — is just an unnecessary way to milk a franchise that’s become a cash cow for author Suzanne Collins and other stakeholders.

The Ballad of Songbirds and Snakes begins 64 years before the events of the original trilogy. While I originally expected this new novel to answer questions about the world outside of Panem and what led to the annual Hunger Games, I now doubt it will.

Scholastic reports that the prequel will begin on the day tributes are chosen for the Tenth Hunger Games which leaves fans wondering: Why? Is it really necessary for us to see another Hunger Games play out? What is the purpose of that?

Suzanne Collins has explained the purpose is to “explore the state of nature, who we are, and what we perceive is required for our survival.”

“The reconstruction period ten years after the war, commonly referred to as the Dark Days—as the country of Panem struggles back to its feet—provides fertile ground for characters to grapple with these questions and thereby define their views of humanity,” Collins said.

Were those questions about human nature not explored sufficiently when we followed Everdeen through two Hunger Games and a civil war? We read about young people violating their moral codes in fights to the death, forming alliances with those who they planned to kill when the time was right. We watched in agony as innocent victims of a twisted regime lost their lives in the name of tradition.

Collins’ goal has already been met.

As a Hunger Games stan, I would certainly love to go back to Panem. The Hunger Games trilogy was one of the few female-led dystopian trilogies of my lifetime that was actually good from the first book through the last.

While many authors of young adult trilogies tend to suffer from a slump at the second or third book (see Allegiant by Veronica Roth, Pandemonium by Lauren Oliver or Ignite Me by Tahereh Mafi), Collins kept us on our toes through all three books.

However, being a stan also means I want what’s best for the legacy of this series. So if an additional book is going to be added to the series, let it be one that will add value to the legacy, not taint it. Let it answer questions that readers still have, years after the release of the last book. Let it explore themes that the previous books didn’t.

Based on what’s been released about the prequel thus far, it doesn’t look like it will accomplish that. Instead of being a valuable addition, it seems that The Ballad of Songbirds and Snakes is the result of stakeholders trying to capitalize on the success of the phenomenal trilogy without evaluating the most sensible way to do so.

I fear this prequel — scheduled to be released on May 19, 2020 — will become the ugly cousin of this otherwise amazing series.