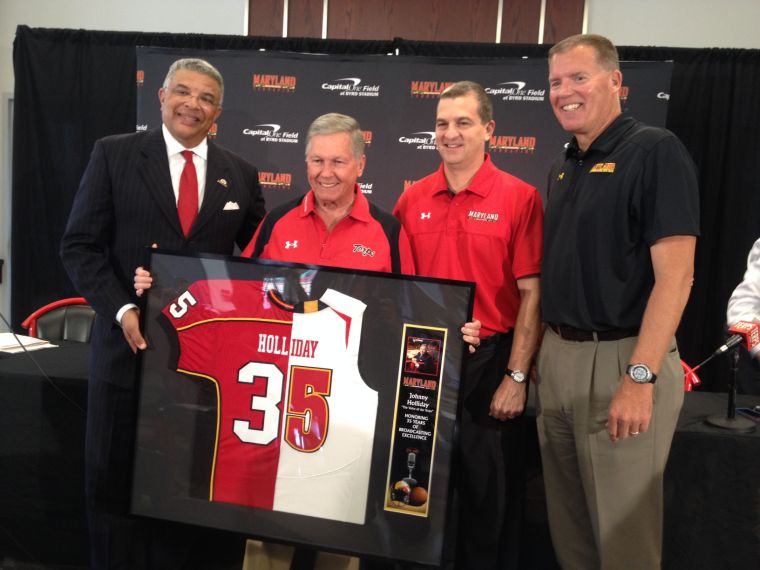 For 41 years, Johnny Holliday has been broadcasting Maryland football and men’s basketball games. His distinct voice has coincided with some of the greatest moments in the history of the athletics department, including the 2002 men’s basketball national championship.

He celebrated his 40th year with the school in 2018 and is continuing to go strong. Along the way, he has received prestigious awards and Hall of Fame inductions, but Holliday wasn’t bred for broadcasting.

And it was an accident. His father told a radio station producer that Holliday was a disk jockey. The only problem was that he wasn’t. Soon after, he was thrust into the broadcasting world, beginning at a small station in Perry, Georgia.

From there, he traveled all over the country, working at stations in Florida, Ohio, New York and California before landing in Washington D.C. in 1969.

“I really enjoyed it. When I started off as a disk jockey, I said this is kind of fun,” Holliday said. “It’s not heavy lifting and I kind of knew I had something going, but I wasn’t sure what.”

A three-sport athlete in high school, the natural transition for Holliday was to go from playing music to broadcasting sports. He began to get those opportunities along the way, mainly in D.C.

“I knew that I could do a little bit more than just play records if I was given the chance,” Holliday said. “Luckily for me, I got that chance and I was fortunate, very fortunate. Right place, right time.”

Now, after decades of broadcasting Terps games, Holliday enjoys his current gig more than ever.

“It’s still as enticing for me now as it was when I started 41 years ago. I think I probably like it more now because you’ve done it so long, you’re so comfortable with it,” Holliday said. “It’s a lot easier than it was the first couple of years.”

He’s also had his fair share of analysts by his side, including current football analysts CJ Brown and LaMont Jordan and basketball analysts Walt Williams and Chris Knoche. Often times, a play-by-play announcer is only as good as who is around them and for Holliday, his supporting cast is among the best in college.

“Over time, it’s gotten a lot easier. Your analyst makes a big difference too,” Holliday said. “… Having two good analysts you can feed off of and bounce things off of during a game is invaluable, really, to what they do.”

His job is not just easier thanks to his analysts, but also from the evolution of technology. It has become significantly easier to call a game since all information is accessible from the internet. On top of that, Holliday has some help in the booth aside from him and his analysts, more so for football rather than basketball.

“When I broadcast, I don’t think anybody in the country does what we do. I have a spotter next to me. He has a headset and a mic. I have a statistician next to me on this side,” Holliday said. “Throughout the game, the stat guy is talking to me while I’m talking. It doesn’t go on the radio, but I hear him and CJ and LaMont do.”

The spotter and statistician help to make the game easier from a high vantage point up in the press box in Maryland Stadium. For basketball, being court-side and having to look at just 10 players on the court at one time makes it significantly easier.

Like any other announcer, even with the help, Holliday still does his research before games. What once took him days now takes him just a few hours as his team sheets are printed out for him.

“In the early days, I did this longhand. I didn’t have this chart,” Holliday said. “We would print out a depth chart and I would have to write everything. The player’s name, the height, the weight, the position, for both teams. That took an enormous amount of time.”

With all that Maryland has gone through, good and bad, Holliday has stuck with the school and the athletics program, doing his best to promote the school the best way he can.

“I still think, no matter all the ups and downs they had, I still think it’s a great university,” Holliday said. “I always knew that whatever the storm was, they could weather it.”

He’s had the ability to call some very important games, from bowl games in football to a national championship run in men’s basketball. More recently, Holliday was on the call for Maryland’s home-and-home football series with Texas. The Terps shocked the football world, beating ranked Longhorns teams on both occasions.

When calling games of that caliber, it’s easier to get amped up for it as an announcer.

“I’d be lying if I said big games are different than small games. I always go into a game thinking we’re gonna win,” Holliday said. “The lesser games, you don’t get as jacked up for. You probably take less time preparing and you’re looser for the game.”

One of the biggest moments of his career was the 2002 men’s basketball national championship. To this day, his famous “the kids have done it!” call is replayed in the minds of Maryland fans everywhere.

“I never gave any thought of how I was gonna be if we won or if we lost until we got down to about the last couple of minutes and I realized we’re gonna win this game,” Holliday said. “We get down to the final seconds and I had nothing scripted and I got emotional. Like everyone else, I got choked up and I was trying not to show it. I had some tears. It was very emotional to see what they’d gone through to get there.”

It’s crazy to think that this storied career had a great chance of never happening. Holliday never had a college education in broadcasting and had any experience before accepting that first job in Perry, Georgia.

None of it would’ve happened if he never said no to that first person. Now, Holliday has gone from a shelf stocker at a local drug store to a legendary college sports announcer, all by never saying no.

“If you don’t believe you can do it, if there’s any hesitation or doubt, then you’re not gonna make it,” Holliday said. “If you have that confidence and you really think you can do it, you gotta be ready when that door opens. Be versatile. Never say no to any kind of assignment.”