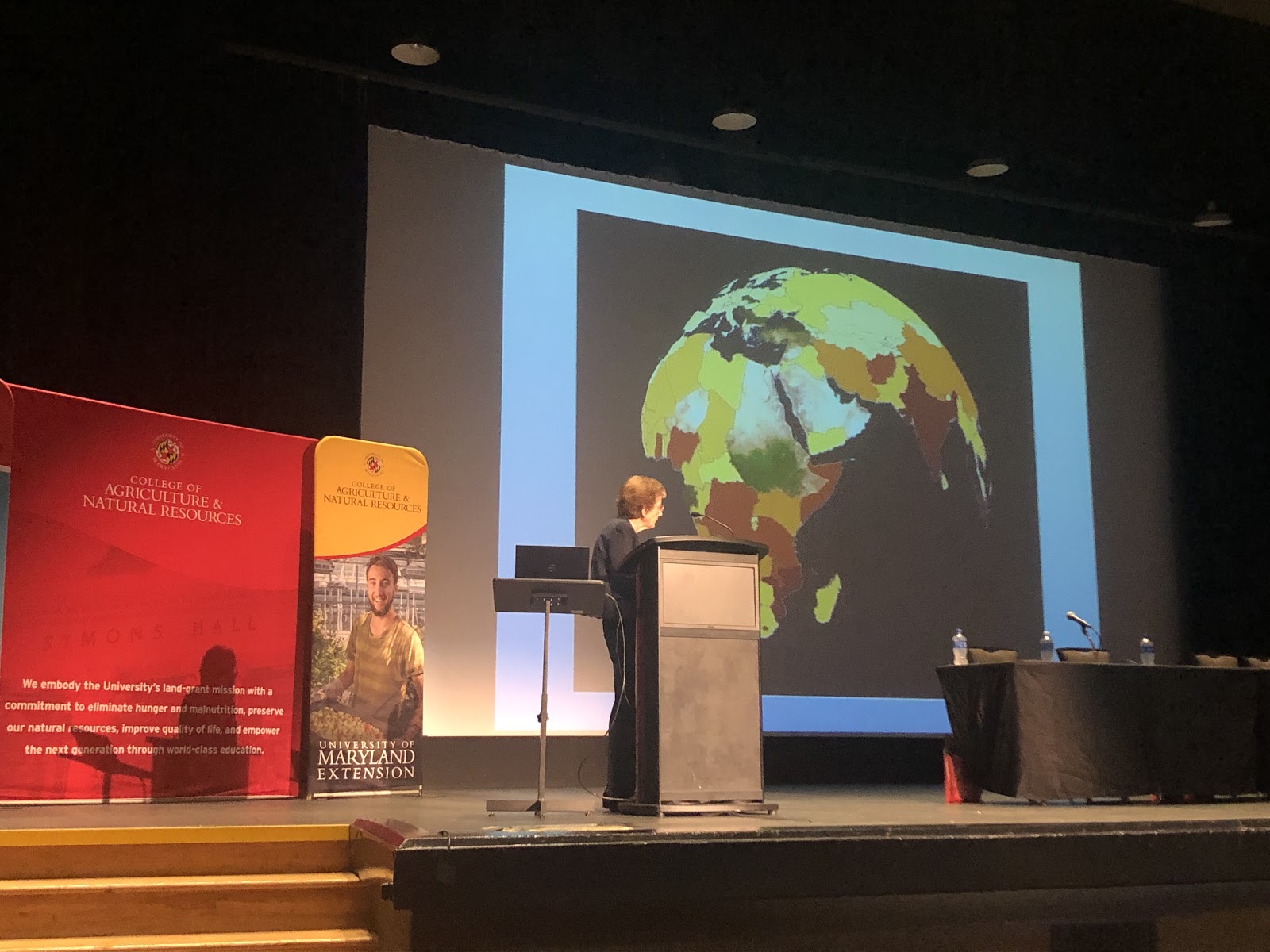 Rita Colwell, a University of Maryland professor, was the keynote speaker for the "Ensure a Clean and Healthy Chesapeake Bay” event, held on Oct. 29, 2019. (Clara Longo de Freitas/For The Diamondback)

By Clara Longo de Freitas
For The Diamondback

The Chesapeake Bay provides about 500 million pounds of food each year and is home to about 3,600 species of plants and animals. It’s also a natural habitat for the bacteria that causes cholera — and climate change is spreading the bacteria.

The potential spread of the bacteria that can cause cholera in the country’s largest estuary — where fresh water from streams and rivers mixes with salt water from the ocean — was just one of the topics discussed during the “Ensure a Clean and Healthy Chesapeake Bay” event  on Tuesday at the University of Maryland’s Stamp Student Union. About 600 people attended the event, which was organized by the agriculture and natural resources college.

Rita Colwell, the event’s keynote speaker, said her career has largely focused on water-related diseases, especially cholera. Through her research, she discovered that the Vibrio cholerae, the bacterium that causes cholera, found in the Chesapeake Bay was naturally-occurring. The bacterium was associated with copepods, a type of zooplankton that live in the bay.

“[The finding] was controversial because it was believed that cholera could only be transmitted person to person,” Colwell said.

[Read more: A UMD professor won a national award for her cholera research]

Colwell later started researching Bangladesh, and her findings matched those in her research on the Chesapeake Bay. Cholera outbreaks have been linked to precipitation, floods, sea surface temperature and coastal salinity — all of which climate change can affect.

Extreme rain events can overwhelm the stormwater management systems, cause flooding and damage property, McClure said. But the rising sea levels are particularly concerning for Maryland.

“[That’s because] a lot of the state is very low tide, which means a relatively small increase in sea levels can cause inundation of large areas … particularly on the Eastern Shore,” McClure said.

Kate Tully, an assistant professor of agroecology at this university who also spoke during the event, said the sea level rise rates on the Eastern Seaboard are about three times the global average.

“Half of the county land area in Dorchester County is projected to be underwater by 2050,” Tully said.

Rate of sea level rise is a main cause of saltwater infiltration. Intense, frequent storms resulting from climate change can also cause high salinity levels on freshwater, Tully said.

The event also covered topics ranging from water contaminants to land use management and the protection of oysters and shellfish. It also featured about 80 posters highlighting student research.

Rose Fan, a sophomore nutritional science major, learned about the event through her college. Initially, Fan was not interested in attending the event — but after learning that the event focused on the Chesapeake, she had a change of heart.

Originally from China, Fan lived on the Eastern Shore during her high school years with a host family. Every year, she said, she went on trips to Tangier and Fox islands through her high school’s study program.

“[We] got to do hands-on stuff and experiment and learn about the pH value in the water, which is definitely essential for all the microbes to grow,” Fan said. “We got to learn that, and we really went down the river and collected the data.”

Colwell said she hopes the students have one specific takeaway: environmental issues matter.

“I hope that the whole day will solidify in the minds of the students that water, climate, environment, are really very fundamental issues for their lives,” Colwell said. “Not so much for me, give it a decade or two, I’m out of here. But you and your children are gonna have to live in that world.”