“We are all just friends who like to jump on stuff”: Meet UMD’s Parkour club 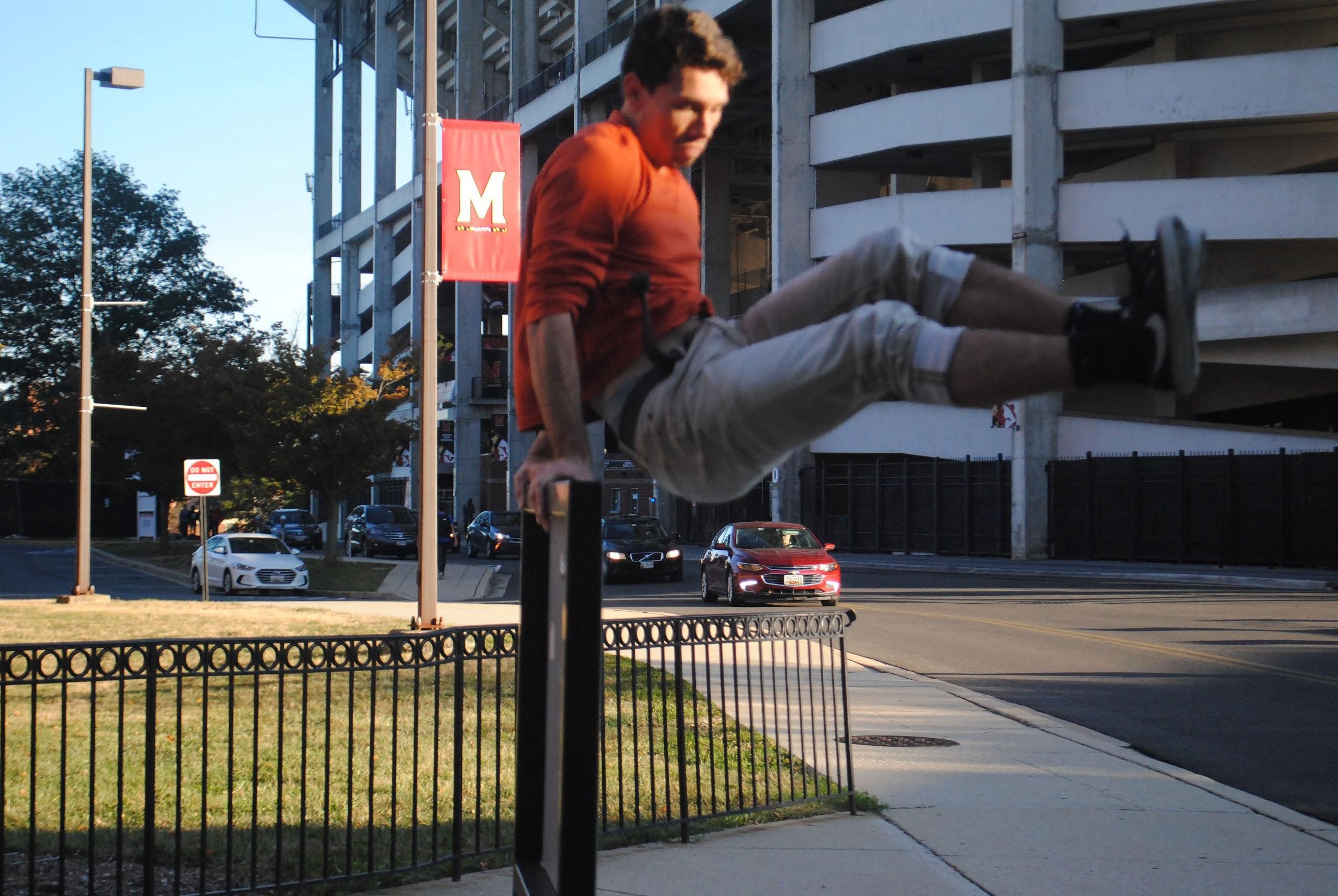 By Bri Corley
For The Diamondback

Seven young men hurl themselves across the brick, haphazardly flipping and spinning outside the Ellicott Community, standing out among the passersby walking to and from classes.

As part of the University of Maryland Parkour Club, their phones capture every failure for further training — and every success for future bragging rights.

Parkour, similar to “free-running,” is the activity of quickly navigating an environment through running, jumping and flipping to cover ground efficiently.

This university’s parkour club, which has been an underground community before turning into an official club two years ago, said they have a large social media following yet typically have around ten people come out during the tri-weekly sessions.

Matthew Wachtman, a 2018 graduate of this university known in the parkour community as “Brother,” compared parkour to “what Jackie Chan does when he is running away from all the terrorists.”

“You have your fight or flight reflex that kills your inhibitors … like how martial arts trains you to use your fight response,” Wachtman said. “Parkour is … training you to run away from something or catch up to something, whatever need be.”

Wachtman, who has practiced parkour for the last decade, has not only been an integral part of this university’s club but has also helped establish clubs at the University of Maryland, Baltimore County and Virginia Tech.

“It’s really friendly,” he said. “We aren’t competitive with each other at all. It’s all about trying to be safe while steadily progressing each individual’s skills. Really, we are all just friends who like to jump on stuff.”

Justin Bartz, the club’s president and a junior physics major, emphasizes that the club is for people of all skill levels and a place of support and growth.

“The club is a lot of beginners because most people haven’t had an opportunity to train before,” Bartz said. “We take people of all skill levels and try to train them up. Everyone wants to learn the flips and tricks and the cool things, so we are working on getting them to the level they want to be.”

Although parkour has its roots in the 1980s, the discipline gained popularity in the U.S. in the mid 2000s. In 2009, an opening segment of The Office featured characters Michael Scott and Dwight Schrute practicing parkour in the Dunder Mifflin office.

In 2017, the United Kingdom became the first country to nationally recognize parkour as a sport. The U.S. has yet to do so.

As the club practiced in the Ellicott Community, most of the people walking by said they didn’t consider parkour a sport. Bartz challenges those assertions.

“I consider a sport something where you’re physically exerting yourself,” Bartz said. “If you consider running a sport or gymnastics a sport, then you have to consider this a sport.”

The club has asked this university for some of the resources that other club sports, such as gymnastics, would receive. Ben Cho, the club’s treasurer and a sophomore accounting major, said it was denied because of the wear and tear on the equipment are reserved for gymnasts. The club is looking at other options, he said.

“It was kinda disappointing, but since then, we made a budget so we can try to go to a parkour gym out in D.C. once or twice a semester,” Cho said.

There are many parkour gyms in the Washington, D.C. area that offer classes to all ages and skill levels. These gyms are often equipped with ledges, ramps, railings and foam pits so attendees can practice any and all skills.

Some of the club’s members said parkour not only provides recreation, but has also improved their physical fitness.

Wachtman, who studied kinesiology, said injuries can be a concern for those who are overtraining or not training properly. As someone who is pursuing a career in physical therapy, he said he is no different.