Review: ‘Countdown,’ about an app that predicts death, is more gross than scary 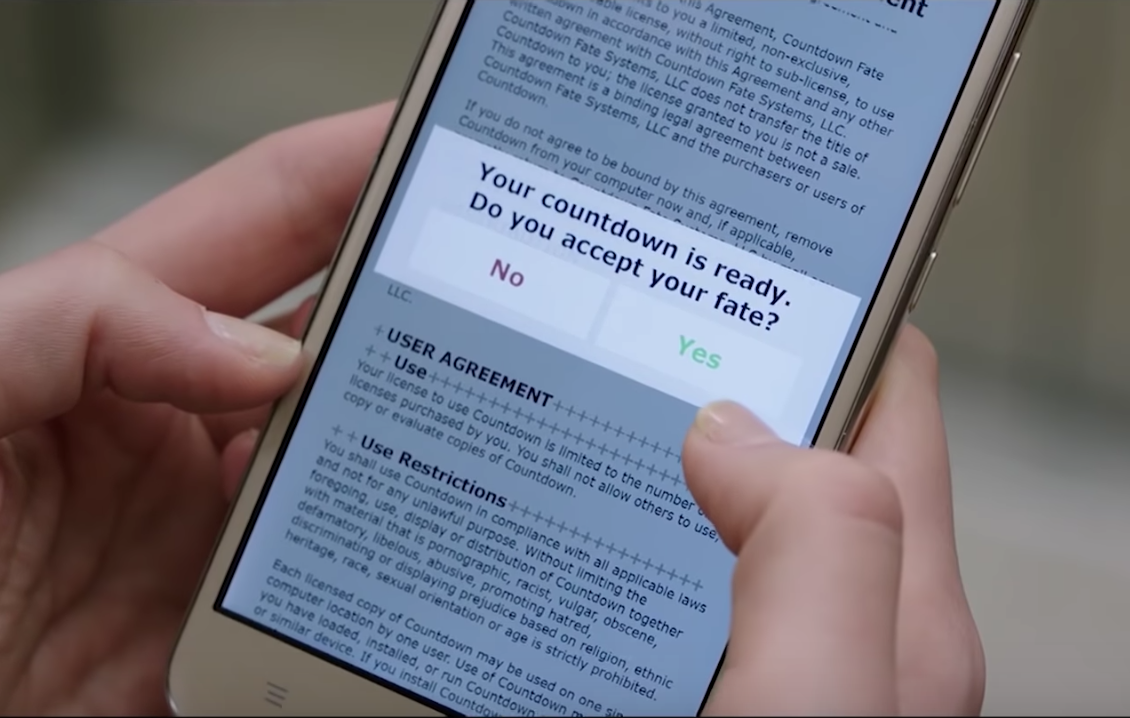 'Countdown' is a film about an app that tells you when you're gonna die. (Photo via YouTube.)

Countdown, probably one of the year’s most anticipated horror films, did not need to be a full feature length movie. It could’ve been a 10-minute short film that stopped after the first death and it would’ve been effective. It would’ve been scary, cool and suspenseful.

But after the first 10 minutes, the movie goes downhill.

The movie revolves around the titular app, which tells you when you’re going to die once you download it. The film loosely explains that when you accept the terms and conditions of the app that you’re signing a deal with your “fate.” So, it tells you when you’re naturally — or otherwise — about to die.

The main character, Quinn Harris (Elizabeth Lail) finds out that she’s going to die in three days, while all her colleagues get to live to their 80s and 90s. She previously made plans to visit her mother’s grave on Saturday with her dad and her sister, but once she realizes that coincides with the time she’s scheduled to die, she cancels.

However, by cancelling her plans, she breaks the user’s agreement with the app. This part of the plot is not explained very well. But if you break the terms by not going where you’re supposed to go for your death, then a demon comes after you to kill you instead.

The demon torments you until the moment you die, because you broke the rules. Out of this, we get maybe one or two good jump-scares, but the rest are pretty baby.

The film relies heavily on “scary” music to tell the audience when they should be scared — which, to me, is a horror movie cop-out. If the only thing scary about the scene is the sound effect, then you’re not doing it right.

There’s a scene where a character, Matt (Jordan Calloway), is in the bathroom of a hospital. Suddenly he sees (as we discover later) the feet of a demon, walking through the stalls. When they stop, they suddenly flip backwards. Disgusting, yes. But scary, not so much. Of course, scary dun-duns and high pitched noises paired with cracking sounds tell you this is a scary moment™ but alas, to me it was not.

This isn’t the first time the movie does weird backwards body stuff to try to make you scared. It happens in a stairwell of the hospital, where a young man sees the backwards body of his dead girlfriend sprint toward him (ew). He falls down the stairs to his death. Whether it’s because he was scared or the demon pushed him, it’s not super clear.

The acting was actually pretty good, which saved the film from being completely horrible. There was a quirky priest and a cynical tech guy who were the funniest and most entertaining parts of the movie, but mostly unnecessary to the plot in retrospect.

The best line in the movie was in the beginning vignette when a girl said to her friend, “Come on, don’t be a beyotch,” when her friend didn’t want to download the app. It was so out of place and awkward that it made me laugh out loud.

I do appreciate that this movie wasn’t annoying about being rooted in technology and phones. Some movies tend to use technology as a crutch to move the plot forward with texting between characters for example. But in Countdown, the phones only show up when the app screams at them, warning them of their impending death.

There’s also a quasi-deep moment when the characters reveal to each other things they’re guilty about doing to their loved ones in the past, which I can only assume is supposed to make this movie a metaphor for wrestling with your inner demons – which is pretty lame. They would’ve had to put way more work into that metaphor to make it meaningful. One short scene in the middle of the film isn’t enough for something like that.

Overall, the movie was pretty entertaining, and kind of funny at parts. It’s quirkiness and overall style is very reminiscent of Happy Death Day, and its sequel, Happy Death Day 2 U. So, if you want to watch a silly horror movie with grossness and slight spookiness, see Countdown when it comes out in theaters Friday. Otherwise, I would skip this one and stick to actually frightening movies.