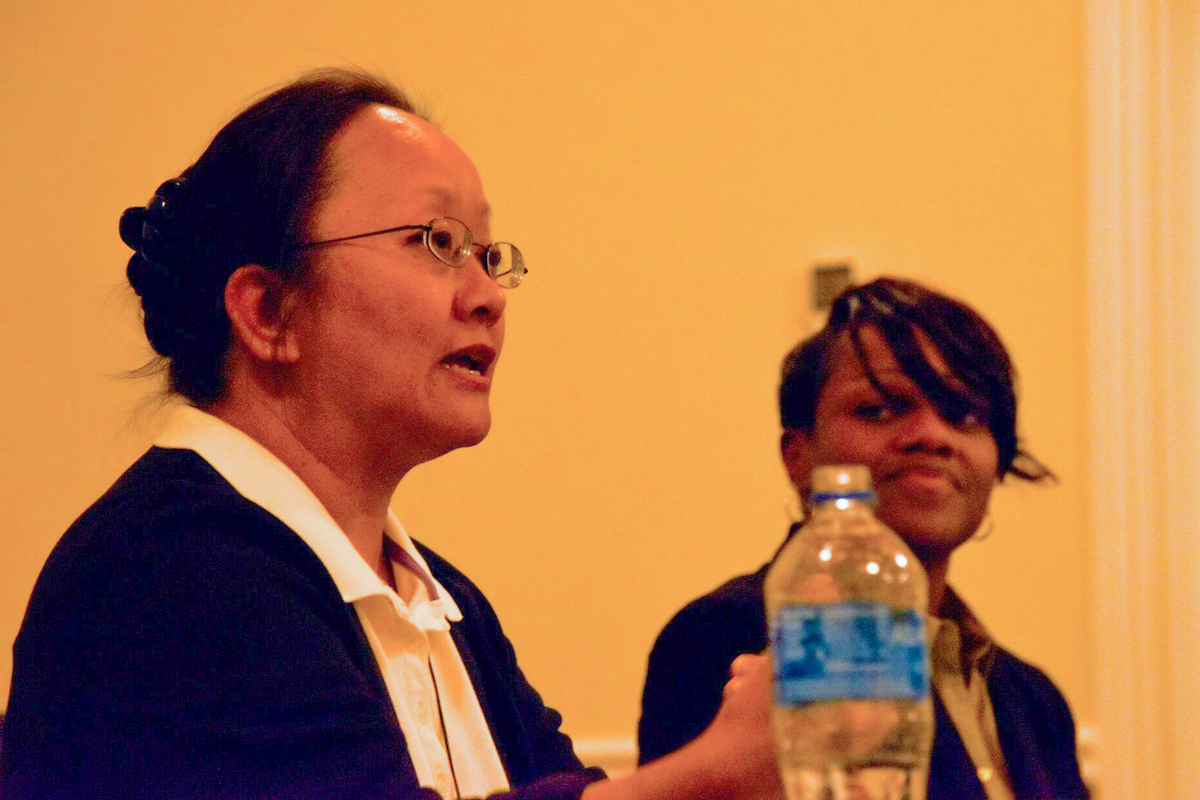 Lalzarliani Malsawma, a College Park mayoral candidate, said at forum on Wednesday, Oct. 16 that she felt “compelled to run” when Mayor Patrick Wojahn, who is openly gay, started campaigning in 2015. (Joe Ryan/The Diamondback)

Several College Park residents walked out in response to homophobic remarks from a mayoral candidate in the middle of an otherwise subdued event Wednesday evening.

Lalzarliani Malsawma said at the beginning of the evening that she felt “compelled to run” when Mayor Patrick Wojahn, who is openly gay, started campaigning in 2015. At a separate forum Monday night, she said Wojahn’s goal to make the city LGBT-friendly was “totally against” her “Christian beliefs.”

In her closing statement Wednesday, Malsawma began listing off council and city positions she said were held by openly gay people. Almost half of the about 40 people in attendance turned their backs as she spoke, and a handful of them walked out.

“I urge you then to have tolerance in the gay community to those who do not agree with you,” Malsawma said as people’s backs were turned. “That is what I have experienced with members of the gay community, who label me as a hater, as a bigot.”

After the event, Wojahn maintained that he wants the city to be inclusive.

“I want everybody to find College Park a good place to live, regardless of who they are,” he said. “And after I stated that, she still doubled down.”

Malsawma previously ran for mayor in 2017, finishing with 101 votes, the fewest amount among the four candidates vying for the role.

The event, hosted by the Yarrow Civic Association and the College Park Estates Civic Association, came three weeks before the upcoming city elections. Candidates for mayor and for District 3 discussed issues ranging from city development to traffic concerns.

In the mayoral debate, candidates had one minute to answer questions and 30 seconds for rebuttals. The District 3 forum did not include rebuttals.

One discussion topic was the recent departure of several small businesses from the city. Most of the mayoral and district candidates agreed that this often happens due to a lack of customers over the summer when students go home.

To help those businesses survive over the summer, Wojahn mentioned bringing more non-students and year-round employees into the city.

When the discussion turned to the upcoming renovations to city hall, Wojahn assured residents that the city would not be paying more money than they had to. The city council set the maximum amount of borrowed money at $14 million, but auxiliary funds set aside by the council only required them to borrow $12.7 million.

The council candidates all agreed that the money was well spent. Rigg cited other city hall projects, such as Bowie’s, which have cost more money. He added the new building will serve multiple purposes, and will include a new civic space and plaza that “proudly displays the city of College Park.”

One of the more timely issues was the recent passing of an ordinance that bans “unruly social gatherings,” which is defined as any event with eight or more people that involves underage drinking, excessive noise, high traffic and more. It’s drawn ire from many University of Maryland students, and the Student Government Association voted unanimously to formally oppose it.

Most candidates supported the ordinance, but others argued that the council could have communicated more with students and landlords.

“The way it is written, I think the students and landlords should have been brought back together, and there should’ve been more conversation,” Pancho said. “I don’t want to really say whether I’m with the ordinance or against the ordinance. … Let’s collaborate more on the way it should be written.”