The 10 least essential things you can stream on Disney+ 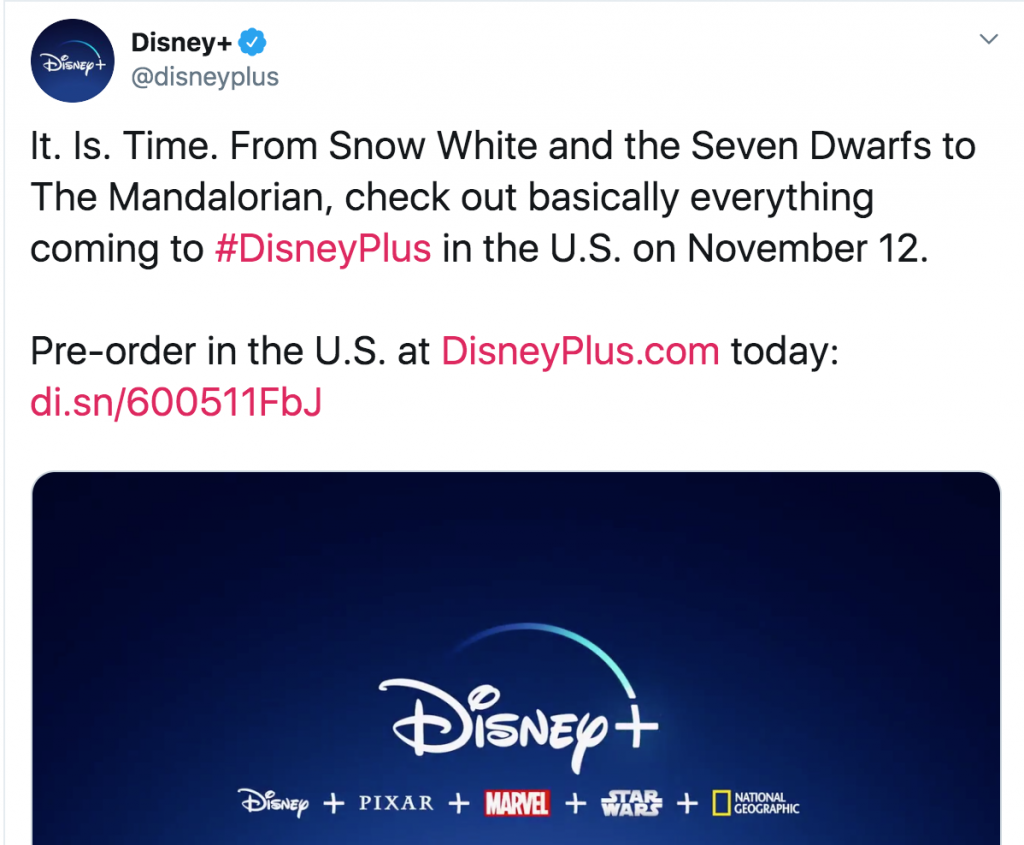 The cumulative Disney movie thread for Disney+ (Photo via Twitter.)

Perhaps the most poignant scene in Robert Rodriguez’s seminal 2002 movie, Spy Kids 2: The Island of Lost Dreams, is when Romero (Steve Buscemi) asks this existential question: “Do you think God stays in Heaven because he, too, lives in fear of what he’s created here on earth?”

Dimension Films, which was then a Disney subsidiary, produced the Spy Kids franchise. Now, Dimension is run by Lantern Entertainment, so it doesn’t appear that it’ll be available on Disney+, the media conglomerate’s streaming service set to debut next month.

So on Monday, in a mammoth Twitter thread, Disney graciously let us know what content would be available. I’m not kidding — they tweeted out hundreds of movies, giving us only their names, release years and kitschy title cards. The sheer banality of it all is overwhelming. All-time classics like The Sound of Music (1965) are lost amid a sea of That Darn Cat! (Also 1965, not to be confused with the 1997 remake, which is also available on Disney+).

Luckily for you, dear reader, I’ve sifted through the Twitter thread to find the ten most absurd entries available. Fair warning: I, too, am now afraid of what God has made for us.

(Disclaimer: I have not watched any of these.)

Before Walt Disney died of lung cancer in 1966, one of the last things he wrote down was Kurt Russell’s name. Well, actually, he wrote “Kirt Russell,” but it showed the reverence he had for the then-15-year-old actor.

Five years later, Russell starred in The Barefoot Executive, essentially a live-action Ratatouille, but with an ape instead of a rat and a TV studio instead of a kitchen. And somewhere, Walt’s spirit was smiling.

This film kickstarted the whole list for me. When it was retweeted onto my timeline, my immediate reaction was, “That’s bullshit, there’s no way in hell that’s a real film, this has to be a bit.”

It was not a bit.

Even worse, the movie’s part of a series. The original, The Shaggy Dog (1959), which will also be available on Disney+, was about a teenage boy who discovers a magic ring that transforms him into a sheepdog. Now, he’s parlayed that fame into a campaign to be district attorney, campaigning as ruff on crime. No word on his stance on non-violent drug offenses.

In 1993, Disney adapted Mark Twain’s classic The Adventures of Huckleberry Finn to the silver screen. It received positive reviews. Two years later, Disney tried its hand at adapting its sister novel, The Adventures of Tom Sawyer, but only made a totally radical 1990s poster with a hip name. USA Today called it “a joyless lump.”

A spiritual predecessor to “Cory in the House,” this movie is notable for three reasons:

I always thought the concept of the Brave Little Toaster was funny. Every now and then, I chortle to myself thinking about it, “Hahaha, a group of executives thought a movie about a toaster would be good! How zany!”

The Avengers: United They Stand (1999) pic.twitter.com/rfModKSOUi

I’d imagine watching this would be like watching literally any piece of content created before 2015 that mentions Donald Trump: Bizarre in the sense that you now have the knowledge that that entertainment gadfly would one day occupy all the media airspace, and there is nothing you can do to stop it. There is no Robert Downey Jr., no Chris Evans, no Chris Hemsworth — hell, Iron Man, Captain America and Thor aren’t even in the series due to licensing issues. Luckily, that isn’t a problem now, because Disney owns every license.

How Dogs Got Their Shapes (2005) pic.twitter.com/LYkdzIH9Hc

This is the first work of nonfiction on this list, and perhaps the most tantalizing. I don’t plan on buying Disney+, but if I did, it would be for this movie. This question will haunt my dreams and creep into my thoughts. I’ve never wondered how dogs got their shapes before reading that Twitter thread. Now it’s all I can think about. On my deathbed, my last lucid thought will be: Why dogs shaped like that? And then I’ll flatline, leaving one of life’s greatest mysteries forever unanswered.

Okay, I lied. I’ve seen this movie, and it is essential, because it is a good goddamn movie that doesn’t get any respect. I will fight anyone who says otherwise. My DMs are open.

The first Disney Channel Original Movie (DCOM, for short, as they always let you know in the advertisements for some reason) to make this list, Dadnapped has a veritable all-star cast — if the only media you’ve ever consumed in your life was Disney Channel circa 2007. There’s Lilly, Jackson and Rico from Hannah Montana, Justin and Harper from Wizards of Waverly Place, and even Mr. Moseby from The Suite Life of Zack & Cody. Also, the titular dad getting napped is the voice actor of Sephiroth from Final Fantasy, which I think classifies this as part of the Kingdom Hearts universe.

I chose to end on this show because it debuted on January 25, 2019 — my 20th birthday, and the official end of my adolescence, much of which was spent consuming Disney content.

The main character, Sydney, is a middle school student who lives with her dad, Max. Apparently, Max has intermittent flashbacks to his younger days, before he met his now-deceased wife. Yet sadly for Max, time marches on. There is no returning to the past, just squeezing every bit of juice from your memories until they’re just a husk, devoid of meaning, or what made them special in the first place.

Granted, watching Max mourn his dead wife probably won’t measure up to watching Phil of the Future reruns. But hey — at least we’ll be able to see both of them on Disney+.