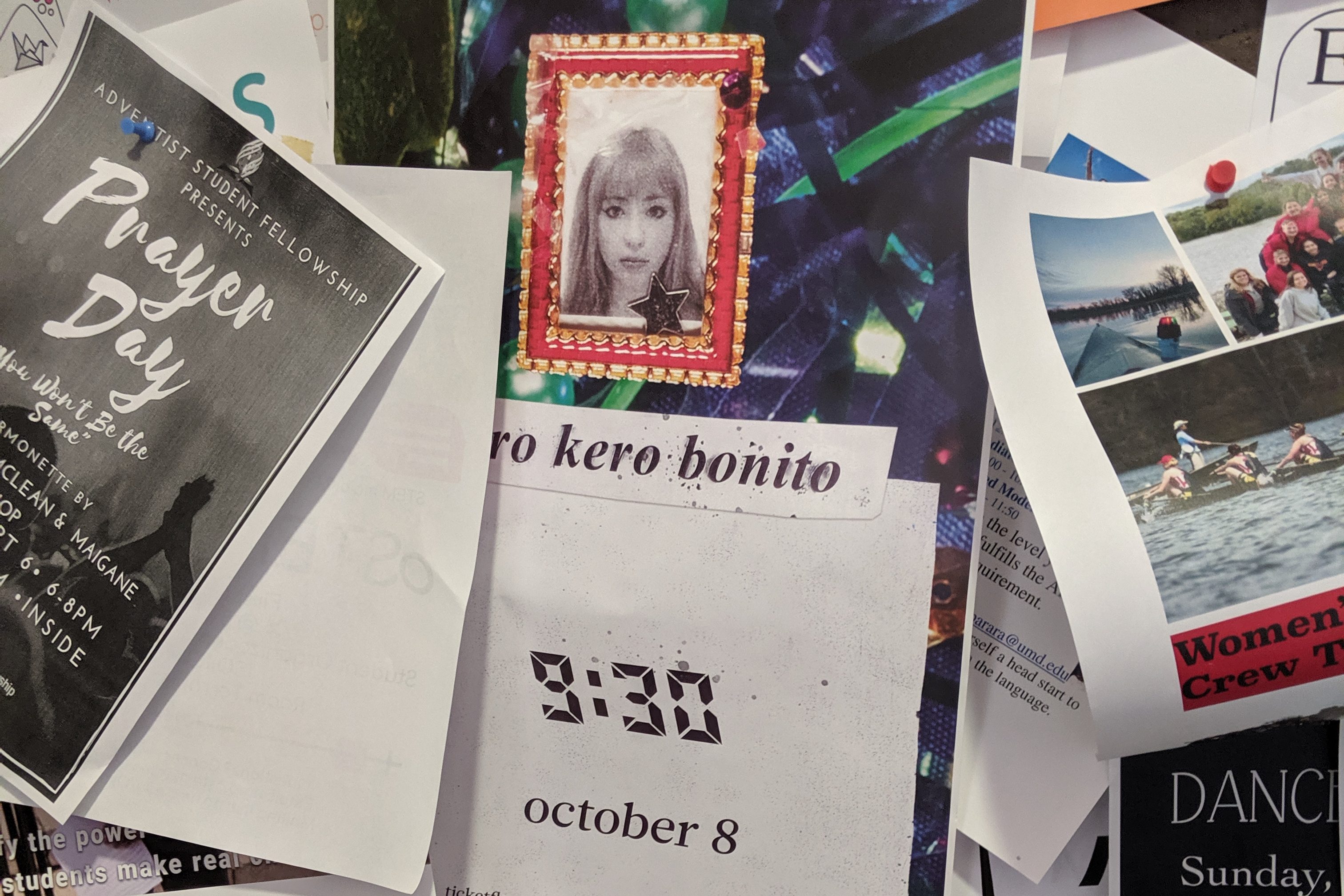 A flyer for the Kero Kero Bonito concert at the 9:30 Club hangs in the foyer of McKeldin Library (Elece Smith/For The Diamondback).

It is by the power and infinite wisdom of McKeldin Library foyer’s announcement board that I first locked eyes with the haunting photo of a sullen Sarah Midori Perry — known to her fans as Sarah Bonito — imploring me to come see her band, Kero Kero Bonito, live at the 9:30 Club on Oct. 8. My first reaction was fear, followed immediately by curiosity — and thus, my relationship with the indie electropop trio began.

Walking into the 9:30 Club in Washington, D.C., a month and a half after first encountering the poster, I knew KKB was going to be quite an unforgettable experience. They had opted for minimal decoration, with a simple tapestry of the cover art for their album Time ‘n’ Place hung along the back wall, trapping us all under the enthralling gaze of Sarah Bonito just as the flyer had that fateful night in McKeldin.

When the concert started, I was surprised to discover the band, whose music generally wavers between bouncy yet relaxed electropop and unusual indie rock, almost immediately incited the beginning of a mosh from their fans. At first, I was confused. Listening to Kero Kero Bonito’s tunes through headphones had never given way to any desire within me to begin furiously shoving my neighbors in excitement, but as always, I wanted to keep an open mind.

As the night wore on, I began to understand where the energy was coming from. By the time KKB had gotten halfway through their 80-minute set to perform “Sick Beat,” a song I know every word to, I found myself pushing back against the encroaching mosh.

When KKB arrived on the U.S. scene in 2014 as the trio we know today, they embraced a lo-fi bubblegum pop style that was equal parts chaotic and infectious. They became known for pairing funky lyrics in English and Japanese with trippy digital sound. Since then, their music has evolved from something resembling Japanese idol music to quirky indie rock. They’ve shed almost all their Japanese rap lyrics and integrated their signature style with more traditional rock instrumentals, creating an indie-rock experience that still holds the group’s original chaotic flair.

KKB’s strength lies not just in their ability to experiment with new sounds, but also in their ability to translate each of their songs into a live experience. Their setlist included a healthy mix of reinterpretations of their older music and more predictable performances of their newer music with the occasional twist. “Flamingo” — first released in 2014 and featuring a catchy electropop track and rap lyrics in Japanese about understanding people as an array of colors — got a fresh sound with the addition of bass, guitar and a few new sounds from the electric keyboard, making for a unique live experience that had me bouncing and scream-shouting along with the crowd.

On the other hand, for “Only Acting” which lends itself more to their newer style, I wasn’t just standing in a room listening to louder versions of songs I knew. I felt as if I was hearing unique new versions of familiar songs, making for an experience that was as audibly entertaining as it was visually.

With a combination of lights and props, each song became its own contained experience. During “Fish Bowl,” lights transformed the venue into a bubbly underwater haven. While playing one of their newest songs “Battle Lines,” Sarah Bonito grabbed a white flag from the back of the stage and waved it in surrender. And later, she whipped out a conductor’s baton to conduct the crowd through a singalong of “Sometimes.”

I left breathless, still riding the high of the band’s encore song, fan favorite “Trampoline,” and as I looked out the window of the train on my ride home, I couldn’t help but wish it had never ended.