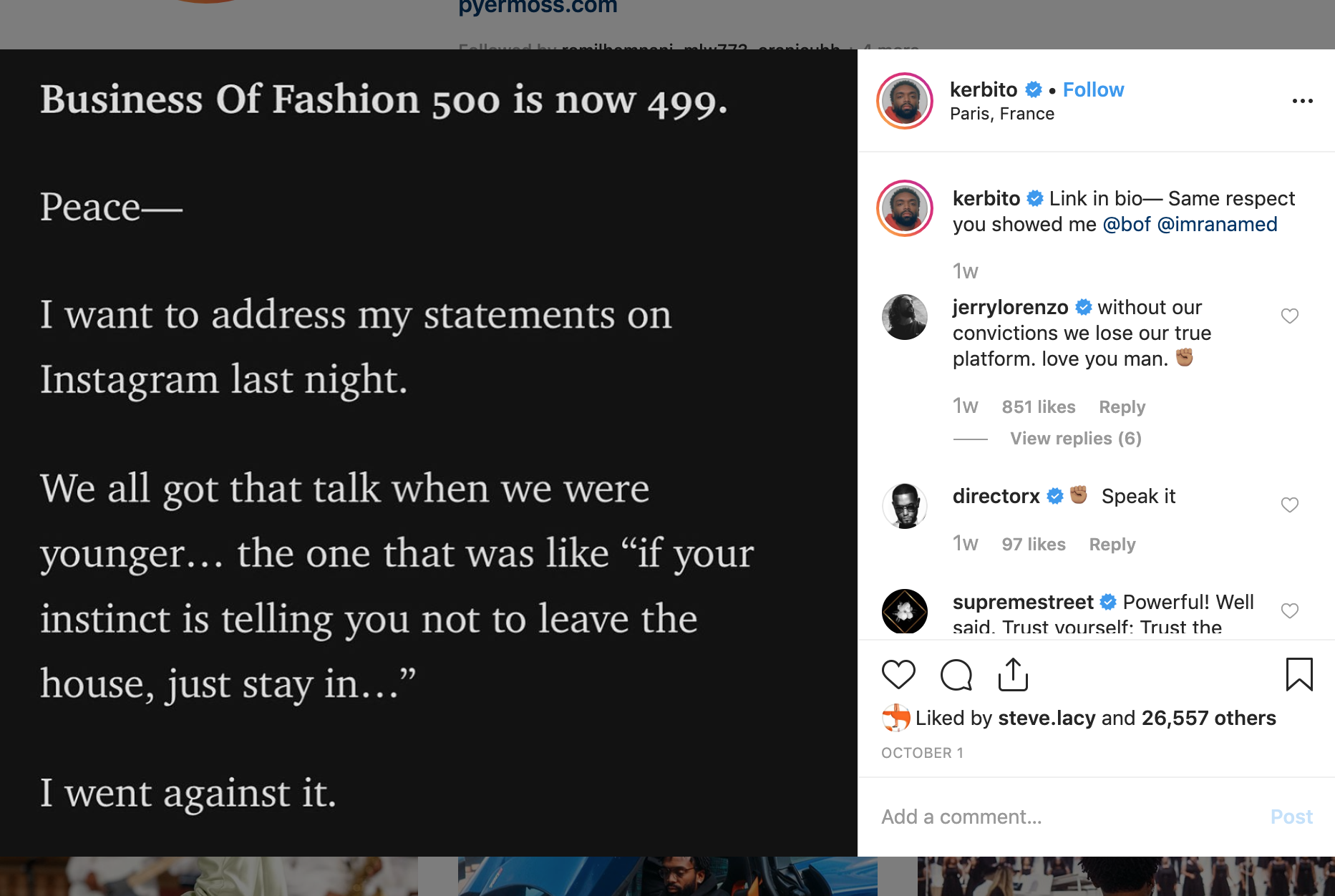 Award-winning designer Kerby Jean-Raymond of luxury fashion brand Pyer Moss recently took to social media to expose the wrongdoings of the editorial giant Business of Fashion for its exploitation of him and black culture under the guise of inclusivity.

In an effort to celebrate inclusivity, BoF released its 500 List detailing who editors believe are doing notable work toward a more diverse and inclusive fashion industry. The list featured 100 new members.

The list released on Sept. 30 included Jean-Raymond. But by the next day, he had announced that the BoF 500 was now the BoF 499. Why?

Well, according to Jean-Raymond, it began last year, when Imran Amed — founder and editor in chief of BoF — called Jean-Raymond to say he was impressed by his work and wanted to feature him in one of the three covers of the upcoming print issue, which would also be the special BoF 500 edition.

Then there was a series of meetings and phone calls in which Amed would ask for Jean-Raymond’s insight into the movers and shakers behind diverse fashion. And not only did Jean-Raymond divulge this information freely, but he also confided in Amed about other projects and professional roles he was offered because, after all, they’d need the information for the cover story.

However, shortly after their last meeting, Amed texted Jean-Raymond they’d decided to go a different route with the cover stories. To make matters worse, at some point during the BoF 500 Gala — which took place on Sept. 30 — Amed gave a special shoutout to a few people who he said inspired the focus of the recent issue. After months of answering Amed’s inquiries, Kerby Jean-Raymond was excluded from that list on top of being denied the cover story he was promised.

As if that weren’t bad enough, the gala featured a black gospel choir singing various tunes throughout the evening.

In an apology of sorts to Jean-Raymond, Amed explained his own background as a child of Ismaili Muslim immigrants. He said he grew up always feeling like an outsider, being the only brown kid in his class. For him, choir and musical theatre in fifth grade was the first time he felt included. That was his excuse for the choir; an excuse that simply does not suffice.

If the evening’s goal was to celebrate people who are actually diversifying the industry beyond runways and chief diversity roles, having a black choir perform for a predominantly white group of industry insiders completely missed the mark.

What it actually accomplished was the tokenization of the choir as being representative of creatives of color when, behind closed doors, one of the most acclaimed black designers of our generation was being exploited for information.

A better way to accomplish its goal would have been to invite up-and-coming designers and stylists of color who often do not get a seat at the table. Let them attend the event, showcase their work, network with accomplished professionals and hopefully get their foot in the door of an industry that is often ruled by exclusivity, elitism, and nepotism. That would have been much more impactful and consequential than a gospel choir.

Moreover, Amed’s response seemed more like a defense of what he did rather than an apology to Jean-Raymond, because he did not address other concerns outside of the choir. He also didn’t make note of the fact that Jean-Raymond was not the only black fashion professional offended by the events of that evening. Designer Aurora James and journalist Elaine Welteroth even took to social media to express their dismay with the entire experience.

Instead, the majority of his response was dedicated to explaining his background and proving how BoF is dedicated to diversity. While Amed has every right to defend himself, when members of a group you hope to celebrate and uplift feel offended and excluded by your efforts, perhaps it’s time to reflect and evaluate your actions — then, and only then, can a sincere apology and actions for change be made.