What to expect from NBA Terps this season 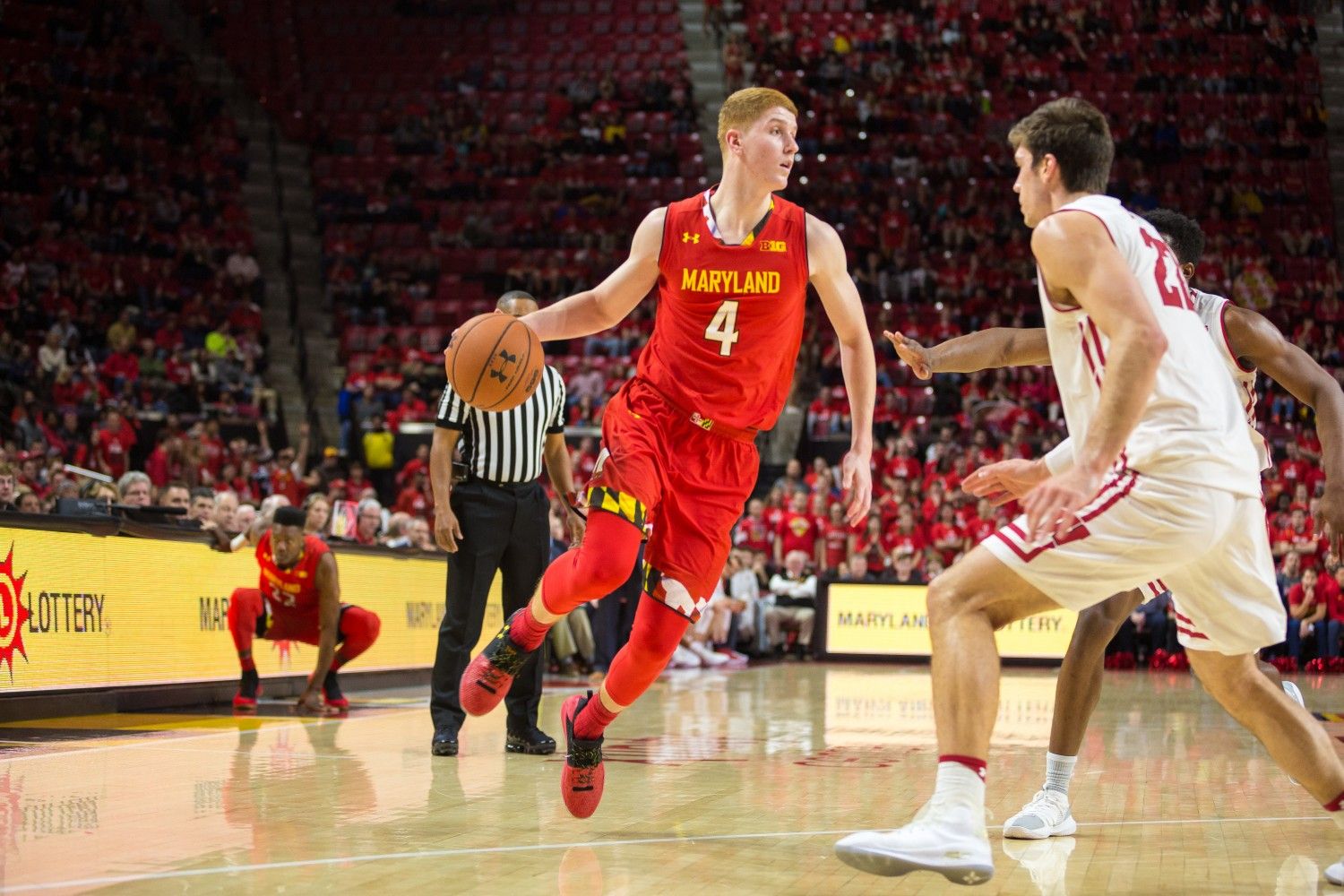 Guard Kevin Huerter dribbles around a defender during Maryland’s 68-63 win against Wisconsin on Feb. 4, 2018 at Xfinity Center. (Marquise McKine/The Diamondback)

Four former Maryland men’s basketball players are on an NBA roster to start the 2019-20 season. Kevin Huerter, Alex Len and Bruno Fernando are all on the Atlanta Hawks, while Jake Layman is starting his first season with the Minnesota Timberwolves.

With the NBA preseason underway and the regular season inching closer, let’s look at how those four will fare this year.

The Atlanta Hawks have been primed as one of the up-and-coming teams in the NBA, and Huerter is a big reason why. After an impressive rookie season, where he was named second-team all-rookie, Huerter is expected by many to take a big jump.

It’s clear to see why there is a lot of high praise for Huerter. He averaged just under 10 points per game last year while shooting the ball with great efficiency. His 38.5% from behind the arc was the fourth-best for any qualified rookie, and his 353 three-point attempts were fifth out of all rookies. For reference, Klay Thompson, who Huerter often garners comparisons to, shot 41.4% from three as a rookie, but only attempted 268 threes. Huerter’s high volume is a good indicator that he will continue to be a lethal shooter.

Although Huerter is one of the most promising shooters in the NBA, there is a lot more to be excited about in his game. His 2.9 assists per game do seem very low, but Huerter was not surrounded by a lot of scoring talent. The Hawks added De’Andre Hunter and Cam Reddish in the draft, along with more bench shooting to their roster in Allen Crabbe and Chandler Parsons. With more offensive weapons around him, Huerter should see his playmaking numbers rise as he’ll likely continue to be the secondary ball-handler in the offense.

The main reason why people believe that “Red Velvet” will have a breakout season is because of the praise he’s received within the Hawks organization. Atlanta head coach Lloyd Pierce has not shied away from lauding Huerter, claiming that he’s one of the players the organization is most excited about.

In the final 57 games of the season — after Huerter became a consistent starter — he averaged roughly 30 minutes per game. Don’t expect that number to vary too much, as he’ll continue to have competition on the wing, but he’s clearly cemented himself as a starter and key part of the Hawks future.

After a disappointing five seasons with the Phoenix Suns, Len signed with the Hawks and had a career year. Serving as the backup center for Atlanta, Len averaged a career-high 11.1 points per game. This year, Len is slated to be the starting center for the Hawks, following Dewayne Dedmon’s departure for Sacramento.

The biggest change in Len’s game from his time in Phoenix to Atlanta has been his three-point shooting. While with the Suns, Len attempted just 25 three-pointers in five seasons. With the Hawks last year, Len attempted 204 threes and made 36.3% of them. The Hawks’ pick-and-roll/pop-heavy offense sets Len up nicely for many open threes, and Trae Young’s playmaking ability regularly gets him even better looks.

The biggest area of concern for Len will be his rebounding ability and low-post defense. Throughout his career, Len has averaged just 6.3 rebounds and one block per game. His percentages are rough too, sitting at a career 17.1% rebound rate and a 4.1% block rate. Last season was his worst at rebounding, bringing in just 5.5 rebounds per game on an abysmal 14.4% rebound rate.

Layman spent the first two years of his NBA career as a bench-warmer for the Portland Trail Blazers. He had a break-out year last season, starting over 40% of the season for Portland. This offseason, he signed with the Minnesota Timberwolves, and his role with them is up in the air right now.

It is very clear that he will be a mainstay in their rotation, but whether it will be as a starter or off the bench is unknown. That hinges on how Minnesota feels about their rookie shooting guard Jarrett Culver. If Culver is good to start from day one, expect Layman to come off the bench, but if they want Culver to get some NBA experience before thrusting him into the regular lineup, Layman could start at small forward, shifting Andrew Wiggins to shooting guard.

The more likely scenario is that Layman comes off the bench and serves as the backup small and power forward. The Timberwolves want to run a “small-ball” lineup this year, meaning they will likely have a “stretch-four” start at power forward this year. A stretch-four is typically a player who would usually play on the wing but has been shifted to power forward due to his shooting and perimeter defending ability. Layman’s athleticism and strength allow him to guard positions two through four, which is a desired trait for stretch-fours.

Layman’s shooting improved drastically last year but still leaves something to be desired. 32.6% on 2.5 attempts per game is nothing to scoff at, but it does leave him as a below-average shooter. The Timberwolves don’t have too many good shooters on their team, so Layman might play a lot more than most would expect. The Wolves do seem to be high on Layman, so another break-out season may be on the horizon.

One thing is for sure: Expect to see Fernando shoot a lot of three-pointers this year. As mentioned before, Len saw his three-point attempts skyrocket once joining the Hawks. Dedmon also saw his three-point attempts go up, going from one career attempt in four years prior to being a Hawk to 358 in his two years with Atlanta. Dedmon also became a very reliable shooter, making 37.2% of his attempts. Although he only shot 13 threes in his two years at Maryland, Fernando’s free-throw shooting ability shows that he does have potential when shooting from range. On 241 career free throw attempts, he shot 76.3% and had the fourth-best percentage on the team last year.

Fernando will also have a lot of chances to throw down alley-oops. The Hawks run pick-and-rolls seemingly every offensive possession, leading to a lot of big-man throwdowns. Young is one of the best passers in the NBA, especially when it comes to lobs, so Fernando should be getting a lot of features on SportsCenter.

With that being said, don’t be surprised if Fernando does not play a huge role with Atlanta this year. Len is the clear starter and Damian Jones seems to have a stronghold on the backup spot. This doesn’t mean that Fernando will be a bust in the NBA; rather, it might take him a while to get acclimated to playing in the pros.

However, Fernando is in a good spot to weasel his way into a bigger spot in the rotation. The Hawks were really bad defensively last year, and their low post defense only got worse this offseason. Although he has a lot of work to do with defending pick-and-rolls, Fernando is arguably already the Hawks’ best low-post defender.