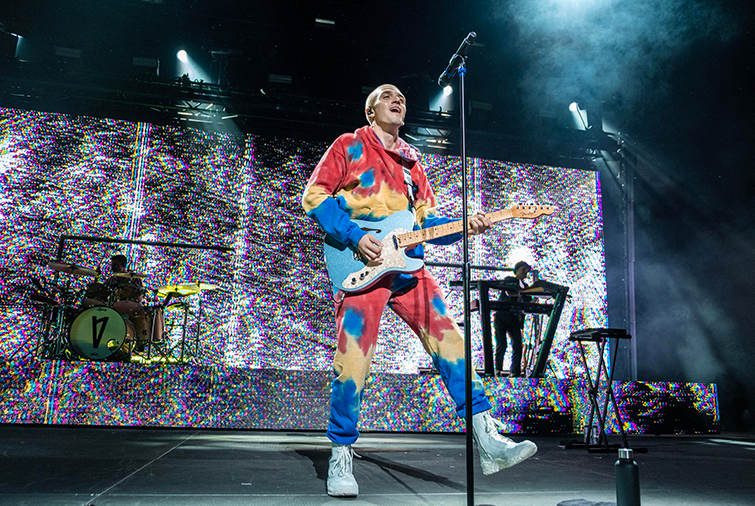 Lauv performed at The Anthem in Washington, D.C., on Saturday, October 5, 2019 to a sold-out crowd (Photo provided by Jordan Grobe/IMP Concerts).

When Lauv graced the stage at The Anthem on Saturday night, he was wearing a tie-dyed hoodie and some jubilant energy along with it. And even though the hoodie didn’t last long — he shed it about two songs in, revealing a white T-shirt underneath — the show was full of psychedelic color nonetheless.

During “Easy Love,” lava lamp-esque blobs lit up the screen behind him, and rainbows and pastel clouds appeared for “fuck, i’m lonely.”

“Paris in the Rain” brought mellow blue lights as the crowd sang along, and during “Paranoid” the lights flashed green with envy, as black and white static filled the screen with each pounding drumbeat.

But it was the softer, more poignant moments that made the Washington, D.C., show special.

Lauv, whose full name is Ari Staprans Leff, took advantage of the first show of his latest tour to debut new material — a sober acoustic melody called “Canada” that he played to a hushed crowd — and to speak openly about his mental health struggles.

In the middle of the set, Lauv left the stage, and strings of white words lit up the black screen. The audience sat in rapt silence as his voice read them aloud: the story of the days before he sought therapy and was diagnosed with clinical depression and OCD, days when he could hardly leave his bed.

It was right before he decided to attend therapy that he wrote “Sad Forever,” he told the crowd when he appeared back on stage.

Perhaps the only stumbling block of the show was the rapid mood shifts: Lauv bounced between dancey bops like “Feelings” and my personal favorite, “Chasing Fire,” to slow and mournful melodies such as “Superhero.”

That song, he told the crowd, was inspired by a note left in one of the boxes that used to be at his shows. Now, those boxes are full-on booths, where fans can leave anonymous messages to the singer-songwriter. The booths, which Leff said are “not a religious confessional,” are meant to be spots for self-reflection and getting things off of your chest.

The concept, fittingly, is colorful too: it’s called “My Blue Thoughts.”

All in all, the set was remarkably honest.

In the middle of the bouncy and energetic “Adrenaline,” Leff handed off his guitar, warning the audience that they were going to see some “really bad dancing.”

Here’s where I must admit that, from where I stood, several rows deep in the packed crowd, I couldn’t see Lauv’s dancing — try as I might to use all of my four feet and eleven inches to peer over people’s heads — but his warning was down to earth all the same.

And afterward, he wasn’t afraid to admit that he was “so out of breath” and take a moment to marvel at a crowd that far outnumbered the audiences at some of his early shows — one of which, he admitted, consisted solely of some Papa John’s employees.

He wasn’t afraid, either, to stop to tie his shoe, a tall white combat boot, before donning his guitar for a smooth and somewhat unexpected solo.

And he saved the best for last with “I Like Me Better,” the latter half of a two-song encore, as a dolphin hopped through a video game animation on the screen behind him, and the crowd could be heard singing practically every note.