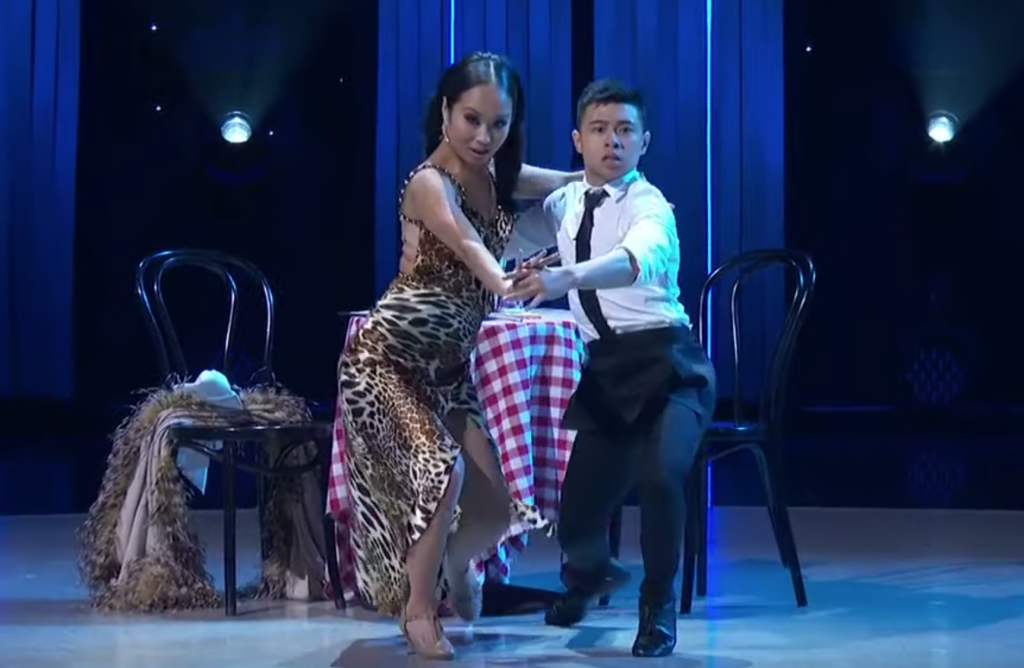 Bailey and Koine perform to 'Mambo Italiano' in 2019's 'So You Think You Can Dance' finale (Photo via YouTube.)

As a former — mediocre at best — dancer, I feel it is my duty to tell you about the best and worst moments of So You Think You Can Dance’s season 16 finale. On the episode that aired Monday night, the top 10 came back together to perform some judge-and-contestant-picked favorites, along with two new group dances choreographed for the final show.

Right off the bat, the opening number was sort of a disaster, especially considering this is a show known for its production quality and professionalism. The top 10 dancers were all over the place, and the dance itself looked like a rushed job.

One contestant, Eddie, had a tap solo in the middle of the number — which, believe me, I think this show always needs more of — but he wasn’t wearing tap shoes. If you listen closely, you can tell they pre-recorded his tap sounds, but the music must not have been cut right because it was nowhere near in sync. When the dancers finally hit their last pose, the music continued on for an uncomfortable amount of time, leading me to believe the whole thing was just off.

Thankfully, the next dance to hit the stage was a hip-hop number choreographed by Luther Brown featuring dancers Mariah and Bailey. This was one of judge Laurieann Gibson’s favorites from the season, and one of mine too. Dancing to “Tempo” by Lizzo featuring Missy Elliott, the duo hit the stage hard. Considering this was the second time they performed the number, all of the wow-factor was still there and not a beat was missed.

Another incredible performance came later as the top 10 performed a contemporary number to “Sign of the Times” by Harry Styles. The performance tackled gun violence, and I shed a tear as the dancers revealed the word “ENOUGH” on their shirts in their final pose. The emotion was so raw, and you could tell every person onstage felt a connection to the issue. This was one of those moments where you have to applaud choreographer Travis Wall for his ability to make the audience feel moved.

Something I felt much less inspired by was judge Mary Murphy’s favorite of the season: A jive from Gino and Stephanie. I didn’t like it the first time, and I didn’t like it this time. Gino’s facial expressions couldn’t have been more forced on either occasion. He looked uncomfortable and lacked the stamina to do the fast-paced movements.

For me, the standout moment of the night was the duet between Bailey and all-star Koine Iwasaki to “Mambo Italiano” by Dean Martin. Bailey, normally a breakdancer, completely nailed this dance, which was absolutely out of his comfort zone. Not only did he get the technique down, but his expressions, unlike Gino’s in the jive, were to die for.

[Read more: Review: Unbelievable on Netflix is a story of hard truths and great women]

As the final four took to the stage to find out who would be crowned America’s favorite dancer, I had a hunch about who was going home first. Sophie placed fourth, which was no surprise to me considering none of her dances were worth mentioning in this article. However, I couldn’t believe Gino came in third.

For all the Dance Mom stans out there, Gino is the boy who made a guest appearance on the show to do a duet with Maddie Ziegler, with whom she had her first kiss. I thought for sure he would make it to the top two — if not win the entire show — because he’s an incredibly talented dancer.

The announcement of the winner was bittersweet, as the final two came down to Mariah and Bailey, who had been duet partners throughout the show. I really didn’t want to see either of them lose, but I knew in my heart Bailey was the crowd favorite.

When Cat Deeley opened the final vote card, she showed it to Bailey and had him read his own name into the microphone. The shock in his voice was apparent, but I couldn’t help but smile for the B-boy who outdanced every technically trained performer this season. There’s really nothing as satisfying as an underdog story.