Fewer international students are coming to the U.S. UMD may soon follow suit. 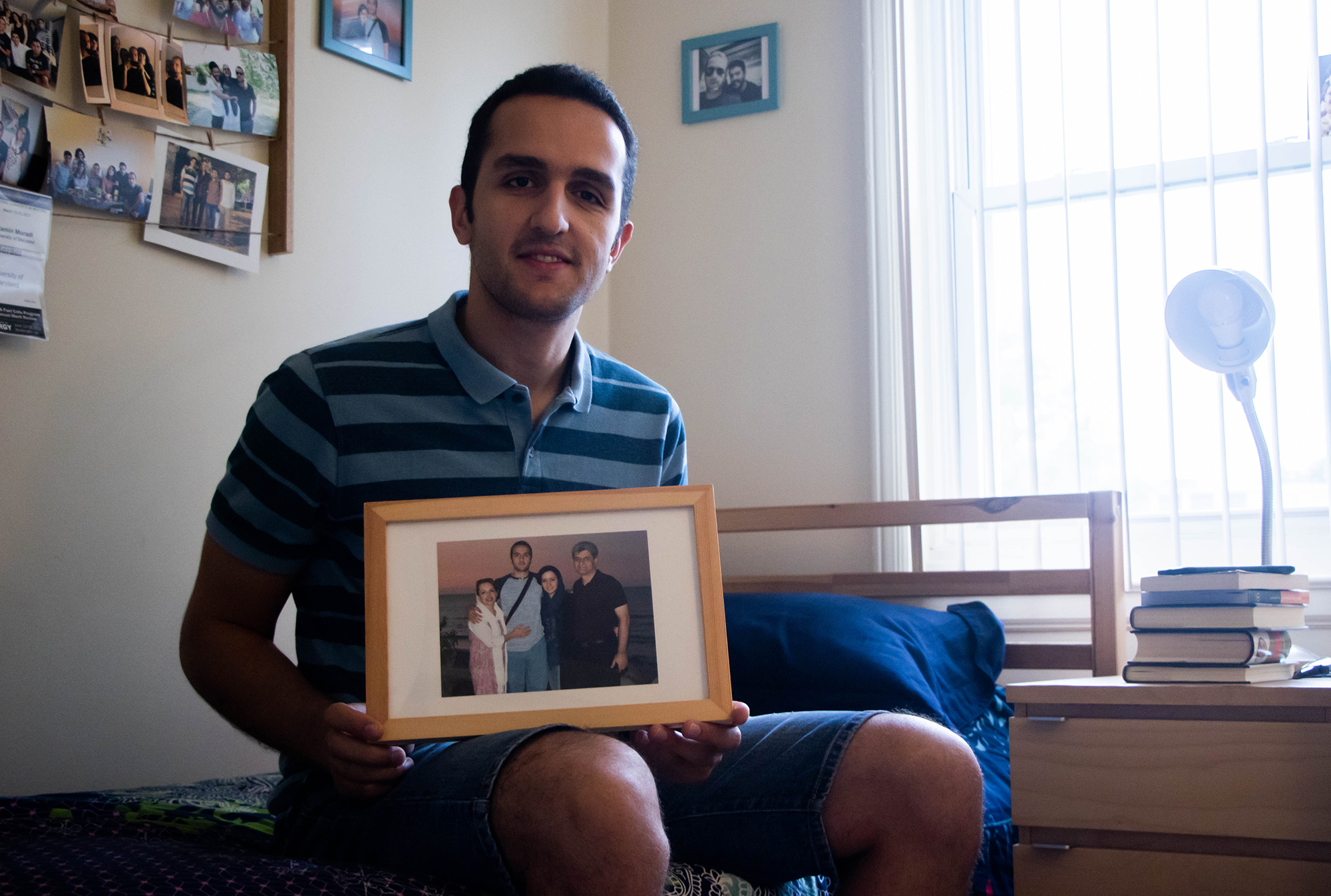 Ramin Moradi, an Iranian PhD student at the University of Maryland, holds a photograph of his family on September 13, 2019. (Julia Nikhinson/The Diamondback)

An international student from Costa Rica, Elkin moved in with her mom in North Carolina in 2015, with every intention of staying here permanently. Back then, she said, a Trump presidency was still a joke.

Now, if she could do it again, the senior women’s studies major said she never would have left the Central American country.

“After 2016, I live in a constant battle every day of do I want to stay or leave,” Elkin said. “As an immigrant, I don’t feel welcome here.”

Elkin is one of a number of international students at the University of Maryland who say they’ve had doubts about their decision to study in the U.S. due to the political climate — and they’re not alone.

Schools like the University of Illinois at Urbana-Champaign have seen a notable dip in new foreign student enrollment. But the University of Maryland has been mostly spared. Since 2016, total international student enrollment has increased by 6 percent, though it remains stagnant as a portion of the student body, according to the university’s Office of Institutional Research, Planning and Assessment.

Growth has definitely plateaued, said Ross Lewin, Office of International Affairs associate vice president. What’s more, an early look at the data for the fall 2019 may show the beginning of a slight decrease, he said.

A recent publication by an international education non-profit, NAFSA: Association of International Educators, shows an increase in students citing concerns about the political climate, denials and delay in the visa application process and safety as reasons why they chose not to study in the U.S.

In recent months, there have been multiple high-profile cases of international students being sent back to their home countries upon arrival in the U.S. This happened to a Palestinian student set to begin his freshman year at Harvard, The New York Times reported, because of political posts people on his friends list had made on social media.

Around that same time, nine Chinese students returning as undergraduate students to Arizona State University were detained and denied re-entry, the Arizona Central reported. U.S. Customs and Border Protection did not provide an explanation for why, the university said in a statement on Sept. 3.

Engineering doctoral student Ramin Moradi said that the Trump administration’s crackdown on visa applications has especially deterred students like him, who are from Iran.

Under the Trump administration’s travel ban, an executive order that bans entry of most foreigners from seven, mostly Muslim-majority countries, Iranian students can still be granted student visas. However, they’re subject to an extreme vetting process and most Iranian students are issued single-entry visas, making their choice to study in the U.S. a commitment to not seeing their families again for several years, Moradi said. Those who return, even for a visit, risk not getting a visa to return to finish their programs.

Moradi’s one of the lucky ones, he said — he came to the U.S. before the travel ban was issued, and is studying on a multiple-entry visa. But he still hasn’t seen his family for a 1 ½ years, he said.

Even though he talks to his parents every few days, he’s hyper-aware that they’re getting older while he’s away. He knows the next time he sees his father in person, his hair will be grayer.

For Elkin, negative experiences with immigration authorities have definitely seeded doubt. In the past four years, Elkin said she’s been stopped and detained five times upon re-entering the country. Some times, it was for minor violations, like having a signature on the wrong part of a form, she said. Other times, Elkin said she was never given an explanation.

On one occasion, Elkin said an officer took her phone. The officer released her once he returned, saying he had called Elkin’s mother and confirmed her story, she said.

Once, she broke out into tears after being detained, and lashed out at the officers.

“I was so fed up with being detained and not being told why,” she said.

Concerned for her privacy and paranoid of being detained again, Elkin said she scrubbed her social media the last time she traveled outside the U.S.: first deleting any political posts, then changing her Facebook name before ultimately deleting the account.

“It’s a nightmare.You go back to your family and see all of them are older, you go back and your younger sister is married — it’s like you get out of prison and see everyone has changed.” Moradi said. “The world has changed. Your country has changed.”

Rather than deal with an unfriendly visa system and potential discrimination, many students have chosen instead to go to Canada or Europe to further their educations, Moradi said.

And this university regularly ranks among the top one hundred in the world, Lewin said.

While he can’t predict what the future will bring, Lewin remains optimistic.

“People are very, very passionate and very invested in recognizing the diversity at our campuses,” Lewin said. “And there is a great passion for international education among more and more universities in the United States.”