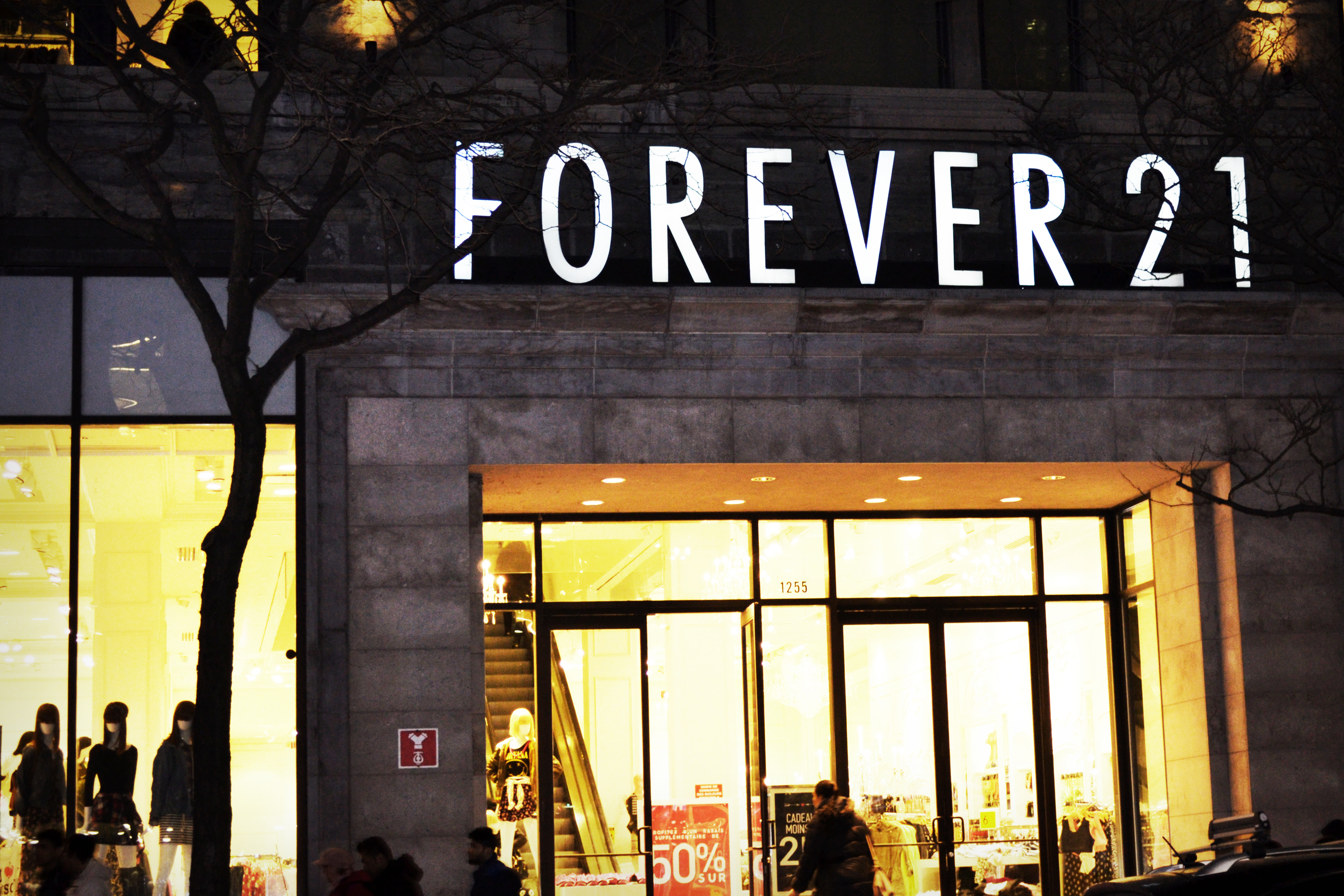 Forever 21 has long been a staple store for cheap, trendy clothes. Now, the fashion chain might be going bankrupt (Photo via Wikimedia Commons).

As students prepare to enter the jeans-and-sweatshirt phase of the fall season, there may be one retailer that watches from the sidelines — Forever 21. The California company may be facing bankruptcy.

Forever 21 had an inspiring start. In 1984, Jin Sook and Do Won Chang, a South Korean couple who had immigrated to the United States only three years prior, opened a store in Los Angeles and were met with immediate success. The store expanded rapidly to become what it is today, currently employing around 30,000 people in over 700 stores worldwide.

Part of the appeal is in the designs; original customers embraced the popular Korean patterns, and continue embracing other Asian influences in their fashion. Another appeal was the price: not dollar store clothing but decidedly not designer-quality. Forever 21 also added men’s and plus-sized women’s clothing to its catalog, which allowed them to reach even more customers.

But Forever 21 hasn’t seen uninterrupted success. The company has faced numerous employee safety controversies including a boycott by garment workers because of poor working conditions, as well as federal fines due to “serious safety hazards” in its New Jersey and New York locations. As of 2011, the company had been sued multiple times for passing off other artists’ work as its own, and, more recently, had a spat with Adidas in 2017 for imitating its famous three-stripe design.

Just last week, it made headlines for all the wrong reasons. Singer Ariana Grande claimed that, after negotiations surrounding an endorsement deal didn’t pan out, Forever 21 used a look-alike model to re-create signature looks from her “7 rings” music video, and she is now seeking $10 million in compensation.

These incidents have damaged Forever 21’s reputation, and the decline of brick-and-mortar retailers due to easy online access does not help. Sears and Toys R Us are two notable chains that have declared bankruptcy in recent years, and Gap announced in February it will close more than 200 stores over the next two years. And while Amazon might seem like the obvious villain, fast-fashion retailers like Forever 21 are facing many other problems.

To make prices low, these companies must find ways to cut costs, and that often starts with the labor employed to make their clothes. Issues over working conditions have plagued fast-fashion giants including H&M, which had factories with 14-year-olds working 12 hours a day, and Zara, which reportedly sold clothing containing notes from unpaid laborers pleading for help.

“Fast fashion” gets its name from the speed at which these companies move from one style to another — a practice that has serious environmental impacts. Much of this clothing is made with synthetic fibers that don’t decay once dumped in a landfill. The United Nations estimates that, if nothing changes, the fashion industry will take up 25 percent of the world’s carbon budget by 2050.

These fast and cheap fashion chains find themselves in a pickle. On one hand, they want to make clothes that are affordable for their younger demographic. And on the other, they know that consumers are becoming increasingly invested in where their clothing comes from, focusing on companies’ sustainability and ethics.

How will fashion chains manage this? The answer isn’t quite clear yet — but they certainly won’t be following in the footsteps of Forever 21.