Remembering 9/11: A look at the UMD community’s response to tragedy 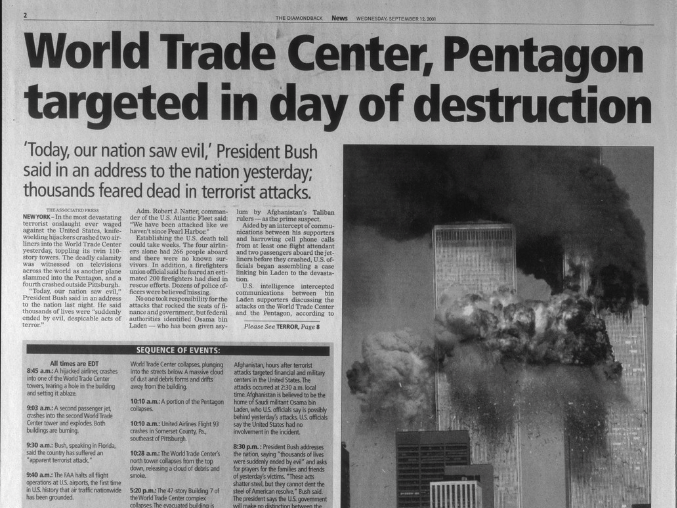 Print editions of The Diamondback from 2001 capture the University of Maryland community's response to the attacks of Sept. 11.

Today marks 18 years since the terrorist attacks of Sept. 11, 2001. A look back at print editions of The Diamondback published in the ensuing days paints a picture of the University of Maryland community’s response to the tragedy.

Though the attacks began shortly before 9 a.m. that day, the university remained open and classes went on as scheduled. Then-university President Daniel Mote said the decision was made in an effort to maintain normalcy, but it prompted outrage from some students.

“While I agree that these tragedies cannot stop us from doing what we need to do and [going] about our daily lives, you do not have the authority to put my life at risk,” one student wrote in a letter to Mote published in the Sept. 12 paper.

No one went to class anyway, recalled Jonathan Schuler, who was editor in chief of The Diamondback in 2001. And they were cancelled the next day.

The campus community, like the rest of the country, was reeling. Many students from New York and New Jersey — who have long made up a large portion of the university’s body — were desperate for word from their families back home.

Two former faculty members who lived less than a mile from the campus and had been on their way to Australia were killed when American Airlines Flight 77 crashed into the Pentagon. Charles Falkenberg and Leslie Whittington had been traveling with their two young daughters.

In the wake of the terror, many Arab and Muslim students were left in fear of being targeted. The president of the Muslim Students Association posted a sign outside Hornbake Library that warned students to “observe caution in your public movements.”

Those who wanted a safe place to pray were invited into Stamp Student Union, and campus police met with administrators to discuss ways to ensure minority students’ safety.

“We must prevent an all-too-common American instinct: to simply blame “the others” for bad things that happen to us, and suddenly allow patriotism to turn into racism and idiocy,” another student wrote to The Diamondback.

The College Park airport closed down, athletics events were cancelled and a search for those responsible eventually led the FBI to canvas a handful of College Park shops on Route 1.

The days after the attacks saw displays of grief and solidarity across the city. Pages of The Diamondback are filled with heartfelt letters to the editor — expressing shock, confusion, anger. They’re filled with descriptions of students on McKeldin Mall crying and praying and hugging. And they’re filled with stories of community: of blood drives and candlelit vigils and peer counseling clinics.

Despite it all, just two days after the attacks, thousands of members of the campus community gathered on McKeldin Mall for one of the university’s longest-running traditions: the First Look Fair.

“We didn’t feel that the theme of the fair necessarily wanted to follow so closely to the accidents, but we also knew that it’s crucial to campus as a tradition,” then-university student involvement coordinator told The Diamondback. “We didn’t want to hinder people from finding their connection.”