Maryland football vs. No. 21 Syracuse: How to watch and what to watch for 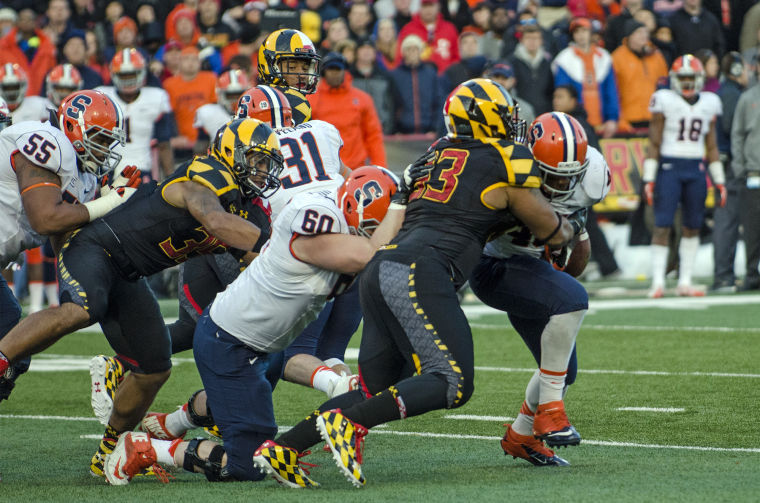 Defensive end Andre Monroe forces a fumble by Syracuse running back Jerome Smith in the Terps' 20-3 loss to the Orange on Nov. 9, 2013.

Maryland fans immediately saw the impact Virginia Tech transfer Josh Jackson had in his first start for Maryland. Jackson went 15-24 with 245 yards and four touchdowns, only playing in the first half of Maryland’s 79-0 blowout win over Howard. Jackson was the first Terp since 1977 to throw four touchdowns in one half, but Syracuse will be his first test under center for Maryland. Despite previously playing in the ACC at Virginia Tech, this is Jackson’s first start against the Orange, so it will be new territory for everyone.

The Terps spread the ball around against Howard as 10 different players hauled in at least one reception. Jackson is expected to be in the entire game against the Orange, but without Jeshaun Jones, it’s still uncertain how they will perform against a solid secondary. They will be relying on Dontay Demus, Brian Cobbs and Darryl Jones, three sophomores who combined for seven catches for 215 yards and two touchdowns against Howard.

If Maryland wants to have any chance of beating Syracuse on Saturday, they need to keep one of the best front-sevens out of the backfield. In their week one shutout at Liberty, the Orange racked up eight sacks and 14 tackles for loss. The Terps were in the bottom half of the country giving up 2.5 sacks per game last season. Any pocket pressure needs to be suppressed since Syracuse was seventh in the country last season with 43 sacks.

Three things to watch for Syracuse

The 2018 season was the first time in 15 years that Syracuse won 10 or more games in a season, ending a four year stretch where the Orange went 15-33. Syracuse had shown flashes of being great, including a victory over reigning national champions Clemson in 2017, but 2018 came out of nowhere. The Orange showed signs of being great in their 24-0 victory over Liberty but also showed many flaws. There is a possibility they could be the 2019 version of 2017 Texas, and we all know what happened when the Terps came to Austin.

With the loss of standout QB Eric Dungey, Syracuse has focused their offense around the redshirt sophomore Tommy DeVito, a four-star recruit coming out of high school. Coming into this season he had only thrown for 525 yards with a 50.6 completion percentage in his college career. He failed to make an impression in his first start of the year against a Liberty defense that gave up the seventh-most yards of any FBS team last season (484.8 YPG allowed). He was 17-for-35 with 176 passing yards and two interceptions. If Syracuse wants to have any chance of winning on Saturday, DeVito will have to live up to his hype.

As was previously mentioned, Syracuse’s defense is their strong-suit, starting with their defensive line. They were able to penetrate offensive lines with ease in 2018, finishing top-10 in sacks and applying significant amounts of pressure to opposing quarterbacks. Maryland will be in big trouble if their offensive line is unable to contain the Orange pass rush.